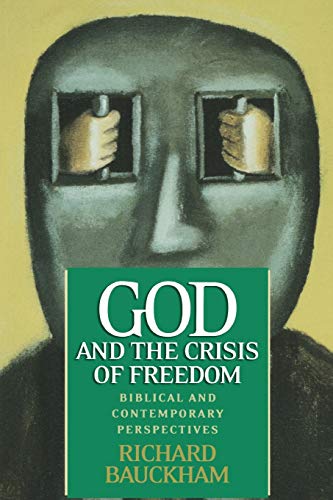 GOD AND THE CRISIS OF FREEDOM: BIBLICAL AND CONTEMPORARY PERSPECTIVES

Post 9–11 and the Iraq war, freedom has been very much in the news as a defining characteristic of our Western culture. So, this book of lectures and essays written by Richard Bauckham, roughly between 1992 and 2002, is very topical. However, of the eight chapters in the book only three are directly on the question of freedom. These three chapters [one, two and eight] deal with freedom in the Bible, in contemporary context and in the crisis of modernity. Chapters three to seven, the bulk of the book, are concerned with ‘authority’, a subject closely related to ‘freedom’ because the latter in modernism and post-modernism is seen as a fruit of rejecting the former. These chapters deal with authority and Scripture, morality and tradition, ‘Egalitarianism and Hierarchy in the Bible’, [the authority of some human beings over others], and ‘Human Authority in Creation’. The book begins with a helpful ‘Introduction’ and an ‘Epilogue’ of reflections on freedom from various authors entitled ‘Freedom in Fragments’.

The fact that the content of this book does not fit the title that well does not undermine its value. The book as a whole is an excellent example of what John Stott calls ‘double listening’. The result is applied biblical theology of a high order that is both faithful to the biblical text and relevant to our context. As we would expect from Richard Bauckham the scholarship is impressive, but the result is not to tickle our minds but to help us to know how to live in freedom as Christians at the beginning of the twenty-first century.

The central theme running through the whole book is the contrast between the biblical and modernist/post-modernist ideas of freedom. Both see freedom as freedom from something and forsomething. Central to the modernist/post-modernist tradition is the rejection of the authority of Scripture, tradition and the morality prescribed by both. Bauckham argues that the hope of both libertarianism and socialism’s belief that we are free to make something good of ourselves has ended up with self-centred consumerism—the freedom of some to have more and more of what can be bought. In contrast to this the Bible and Christian tradition offers an intimate relationship with our heavenly Father, through Jesus the Saviour, in the power of the Holy Spirit, that releases us from bondage to our self-centredness to bless God, others and even the earth itself.

Our relationship to the earth and its creatures is examined in the long chapter on ‘Human Authority in Creation’. The first section of this chapter deals with Lynn White’s famous paper that lays the blame for the contemporary destruction of our planet at the door of the Christian view of human dominion over the earth. Bauckham concedes that there is some justification for this but argues that the Christian understanding of Genesis 1:28, which is the key text, has always been influenced by extra-biblical thinking. He also shows that there has always been an alternative Christian view as seen in the stories of the saints. This theme of respect for creation reached its climax in Francis of Assisi. This chapter concludes with the assertion that human dominion over the earth is a fact and that the crucial question is not whether but how it is to be expressed. The claim is made that there are resources in the Bible and Christian tradition that provide a better alternative to modernist exploitation or post-modernist neo-paganism. For me the book is worth buying for this chapter alone.