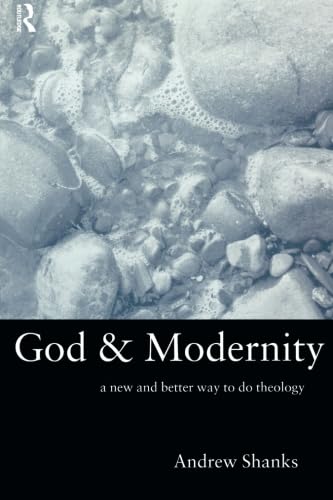 God and Modernity. A new and better way to do theology

Andrew Shanks has given us an elegant monograph dedicated to the finding of a theology which breaks out from confinement within the university (liberal) or the church (neo-orthodox) (ix). Inspired by the late twentieth century phenomenon of New Social Movements (NSMs), Shanks seeks to elaborate a properly pluralistic and ‘trans-confessional’ (and therefore not reductionist) theology that can address the concerns of civil movements to engage in conversation under the banner of solidarity. A theology prepared for the advent of a Third Modernity.

Shanks is a thorough going disciple of Hegel, and bases his search on an idealist reading of history. Indebted to Karl Jaspers in hoping to see a second Axial Period in the development of religion, (n.b. not religions) the author believes that a sectarianism fostered by the reaction of First Modernity (Christendom—Augustine) to Second Modernity (Enlightenment—Kant/Hegel) should be ‘worked through’ in ‘shaken thoughtfulness’ achieving a peaceable, civil conversation between groups of different traditions—the terminology in the book is a little laboured but is handled consistently—which unfortuately meant, at times, consistently compounding vagueness.

Christian theology is obviously Shanks’ starting point but he also includes a chapter devoted to Islam precisely because it has been affected, although differently, by First and Second Modernity. NSMs pose the ‘most urgent particular challenge’ to traditional theology in undertaking ‘de-confessionalising’, which ‘development marks a major step forward, towards the true fulfilment of historically-minded religion’. Never mind that Shanks writes lucidly, with mostly judicious appropriation of sometimes unwieldy sources (e.g.Hegel, Jaspers, Kierkegaard, Milbank, Habermas), the question that lies at the heart of any assessment of this work is that of history: precisely which history?

Whilst disavowing the liberal project of watering down a tradition’s confession to please adherents of another, it is not immediately clear that Shanks does not, nevertheless, fall into that same trap. Whilst any division of history into periods and phases may have some heuristic merit, it does seem that his prior decisions here dictate the possibilities and demands, to which he accedes, in reading the present and desiring the future. Are his moves warranted? Is his project any less ‘enthusiastic’ in judgement than that of twelfth century Joachim of Fiore and followers to whom the author introduces us (121 ff.)? Well, according to Shanks this question of warrant is unimportant, or at least fails to properly understand him, and so it is not surprising that he has so much difficulty with Oliver O’Donovan, to whom he applies the label ‘recoil-theologian’. Shanks clearly states that ‘Christian theology cannot find any decisive precedents in the Bible to guide it, one way or the other, in its response to other traditions’ (of ‘religion’, 63) because of the way he chooses to read the beginning of the Axial period of ‘religion’ emerging from ‘magic’. Whereas, for O’Donovan, ‘salvation-history’ is the authoritative framework for any political or civil theology, Shanks does not accept that ‘authority’ is the prime category to focus theology for Third Modernity. But it seems that this relativising is actually methological evasion tout court of Christ’s authority. So, for example, his desire to facilitate conversation has nothing to learn from Pentecost, despite claiming to be properly trinitarian (125).

We come, then, to question: for whom Shanks has produced his theology? It is clear it is for the ‘shaken’, with whom he stands in thoughtful solidarity; an apologetic for NSMs and an idealist-progressivist reading of history wherein Christ is a symbol but little else. New, maybe, but not better, for better would be a theology that faithfully responded, trusted and obeyed God and his word, and so worse, for seeking novelty in bondage to human wisdom.