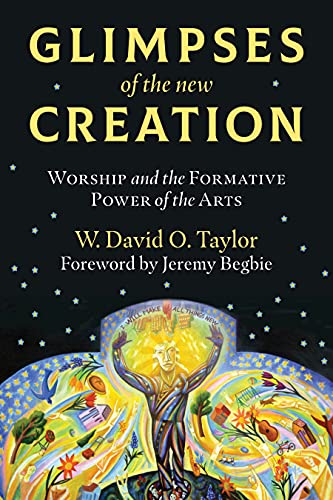 Glimpses of the New Creation: Worship and the Formative Power of the Arts

It’s often difficult to separate one form of art from the others. The musical art of melody often joins with the poetic art of lyric to achieve the narrative art of storytelling. When that musical, poetic, and narrative art is used within the architectural art of musical theatre and the kinetic art of dance, a person recognizes the interconnected reality that is “the arts.” Now, place that dynamic and complicated use of the arts within the context of a local congregation and you have a powder keg—a dynamis for transformation or destruction.

So, how should churches think about something as complicated and interrelated as the arts?

Thoughtful writing about the arts is notoriously difficult to find. It is unusual for an individual who has developed proficiency in one artistic field to also have developed proficiency in the written word. When that does occur, the books produced tend to investigate a single artform from the perspective of a master practitioner. Books that attempt to discuss the arts more comprehensively often solicit chapters from multiple authors—multiple perspectives from various individuals with expertise. Inevitably, though, such collections often lack a unifying concept or any interaction between the presenters.

Thus, who would have the expertise to consider the various forms of the arts, their individual and collective contributions, and their use within corporate worship? Happily, we have found someone: W. David O. Taylor. Taylor’s new book, Glimpses of the New Creation, provides the sort of comprehensive and unified consideration of the arts and their wise use within the context of the local church that advances the conversation.

One of Taylor’s best gifts to this conversation is found in his discussion of the “power” of the arts. Cognizant of both those who view the arts overly suspiciously and those who imbue art with salvific power (ex opera operato), Taylor provides the useful maxim, “The arts in worship ought to be freed to form the church in their own ways, though not on their own terms” (p. 2). Like a compass, Taylor’s bon mot guides his book to carefully evaluate the ways and terms of the arts that allows for both generous inclusion and cautious warning.

After a lucid and theological introduction to the topic, the main section of the book consists of chapters that consider forms of art (musical, visual, poetic, narrative, theatrical, and kinetic) using the same thoughtful paradigm. First, it considers the form of art theologically; that is, it seeks to catalogue biblical descriptions and uses of the important terms and to examine those descriptions in light of the whole canon. Next, it seeks to tease out the “singular powers” and the “purposes” of the artform. Having considered these aspects within the context of corporate worship, each of these chapters conclude by discussing the “formative possibilities” that utilizing that particular form of art provides.

Taylor has spent plenty of time reading, thinking, and teaching about these subjects, and his expertise is on full display. Each chapter pushes the discussion from the initially intuitive to the genuinely insightful. A worship leader who may have skipped Taylor’s chapter on the kinetic arts (because of, say, a disinterest in ribbon dancing) would miss his insightful discussion of the various ways congregational seating forms a congregation.

Taylor’s insights don’t end with the concluding chapter, as several appendixes tease out his insights in very practical, conversation-starting ways. In particular, Taylor’s appendix providing “questions for discernment” regarding videographic arts has turned out to be prescient in the era of COVID-19. And his appendix on “Further Reading” should inform the Amazon wish lists of worship pastors for years to come.

Taylor’s work here is a tremendous gift to Christ’s church. I have already assigned it in several courses that I teach, and I whole-heartedly recommend it to any thoughtful person engaged in artistic endeavors within the church.

Given such an undoubted achievement, the following comments should be regarded as gnats to strain. First, after carefully noting the notorious difficulty of finding a proper starting place for beginning a theological exploration of the arts, Taylor may overstate his own—the life of the Trinity. Of course, all Christian faith is bound up in the Triune God, but not all believers would consider their Trinitarian faith in the vicarious terms that Taylor uses. If worship “is about how we have entered into the rhythms of Christ’s own liturgical life” (p. 25, emphasis original), how might that relate to, say, repentance? Asserting that Christ repents on behalf of his people requires further demonstration than we find here.

Second, while Glimpses of the New Creation offers a compelling and inspiring account of the arts, it does so from a particular perspective: the English Reformation. At the risk of oversimplifying the discussion, consider the distinctions between Anglican piety (such as Taylor advocates for) and Puritan piety (my own heritage). Alongside a focus on Christ’s sacrifice for sin, Anglican piety contemplates Christ’s life—through observation of the Christian year and devout meditation upon the Divine mysteries of revelation—to the end that the believer might “follow the blessed steps of his most holy life” (Book of Common Prayer, “Collect for the Second Sunday after Easter”). This sort of contemplation and ceremonialism made Puritans suspicious, as it seemed to perpetuate the mysticism and superstition of medieval England. For Puritans, the Christian life was the war for their own soul more than the recapitulation of Christ’s. Consequently, Puritans were interested less in the birth in Bethlehem than in being born again; less in past historical drama than in the current war for the soul. (See the discussion in Horton Davies, Worship and Theology in England, Volume 1: From Cranmer to Hooker, 1534–1603 [Princeton: Princeton University Press, 1970], 67–69.) These two heritages of the English Reformation have often served as two eyes: providing churches with the “perspective” they need to be faithful followers of Christ.

I am thankful that Taylor has pointed out the log in my (more restrictive) tradition’s eye. May the specks in all of the eyes of our heart be removed so that we may know the hope, riches, and power of the Lord.