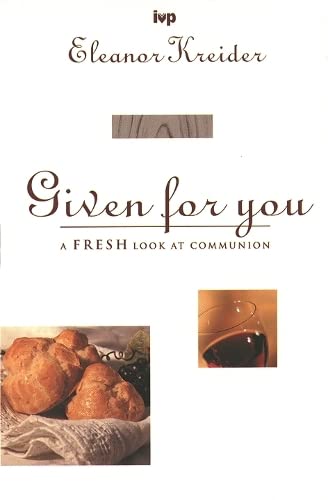 Given for You: A Fresh Look at Communion

Even Dean Inge might have liked this book. Many today would still concur with Inge’s famous comparison of liturgical study to stamp collecting, and with his judgement that there was little point in either. Thankfully, Eleanor Kreider does much to liberate liturgiology from such stereotypes. She is clearly acquainted with the key sources in her field, and displays an assured grasp of the technical aspects of eucharistic doctrine and history. What distinguishes this work, however, is her ability to weave a vast range of material into a fluent, vivid and largely convincing narrative.

There are books on liturgy which read like the theological equivalents of car repair manuals—this is not one of them. At times Kreider’s ability to evoke the meanings and dynamics of Holy Communion are nothing short of poetic. This is substantially due to the fact that she has travelled widely and undertaken a great deal of fieldwork in various traditions and locations, as a ‘participant observer’. Indeed, her prose exudes not only the language, but also the sights, sounds, music, tastes and smells of communion on five continents. All this will be appreciated by IVP’s mainly evangelical readership, which is hardly known for its devotion to liturgical theology.

Although she clearly cherishes her own Mennonite tradition, Kreider’s diverse experience lends weight to her gentle critique of ‘freer’ evangelical approaches to the Lord’s Supper. Indeed, one indication of this is her defence of the word ‘eucharist’ as an appropriate description of the sacrament.

The task Kreider sets herself is an ambitious one. She begins by tracing the roots and development of communion from Jewish blessings and Roman banquets through Jesus’ Last Supper and the ‘love feasts’ of the early church, to medieval, Reformation and modern variations. In the main body of the book she explores the key biblical, doctrinal, missiological and pastoral themes associated with communion. Her central thesis is that communion shapes character, and especially the corporate character of the church. ‘At the table’, she writes, ‘the people acknowledge the Lord’s presence. He offers them the bread of life and the cup of joy. In receiving these gifts, they are shaped by the Spirit into a compassionate community of love.’

Beyond these broader brush strokes, Kreider is unafraid to examine controversial issues such as open very closed tables, infant reception, the common cup, extemporary very scripted prayer, and the vocabulary of ‘sacrifice’ and ‘offering’. On all these points she is careful and fair. She does not even try to hide her own preference for relatively structured rites accessible as ‘converting ordinances’ to more than the local fellowship of believers.

As much as anything, this is a book teeming with ideas. Kreider’s grass roots research throws up numerous strategies for renewing the way communion is done. When matched to her own creative suggestions, it has to be said that there is an occasional sense of ‘information overload’. This, however, is due more to Kreider’s infectious enthusiasm for her subject, than to any serious organisational neglect.

All in all, Given for You is a lucid and thorough introduction to a subject which is too often characterised as either daunting, obscure or the preserve of ‘high church’ Christianity. For students, ministers and congregations alike, it deserves to become a standard introductory text.