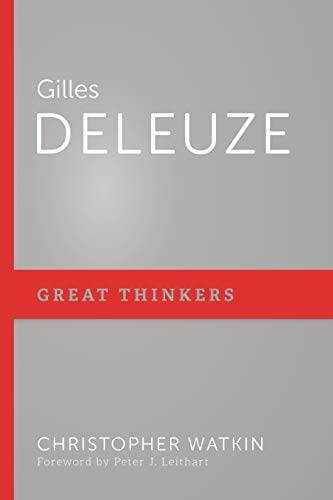 Even the most conscientious of thinking Christians might be tempted to pass on an engagement with French philosopher Gilles Deleuze (1925–1995). For a start, Deleuze’s writing style is among the most impenetrable of the post-structuralists—no small feat in a highly competitive field. The challenge is compounded if a lack of facility in French consigns you (as it does me) to English translations, and with them the associated haunting feeling that perhaps you’ve missed something that was clearer in the original. Furthermore, when one does manage to grasp what Deleuze is saying, what he says appears decidedly unfriendly to Christian truth. Finally, other post-structuralists, such as Foucault and Derrida, are more widely read than Deleuze, and therefore arguably more influential. Perhaps in a world where you can’t do everything, the difficulty of reading Deleuze can be safely put to one side.

Christopher Watkin, however, believes Deleuze is worth the trouble. Having previously written Jacques Derrida (2017) and Michel Foucault (2018) for P&R’s Great Thinkers series, in his most recent contribution, Watkin provides us with a generous, critical, and absorbing account of Deleuze’s thought, brought into vital contact with reformed theology and the voice of Scripture. For Watkin, Deleuze is a compelling interlocutor for Christians concerned to understand the direction in which western culture is heading:

If Derrida and Foucault help us to understand how our society got to where it is today, then perhaps Deleuze best of all can help us understand where it may be heading tomorrow. (p. xxiii)

Developing his thought through the 1960s to the 1980s, Deleuze produced a vision of ontologically flat relationships, of human lives freed from teleological constraints, and of an infinite variety of sexual and gender identities. From the vantage point of the 2020s, it was a prescient vision.

Deleuze’s thought is also strangely resonant with theological concerns. He engages in metaphysical questions to a degree uncharacteristic of his generation (p. xxix). His agenda (in the words of Peter Leithart’s foreword) was “to erase from philosophy the last faint trace of theology” (p. xiv). Ironically, this self-conscious rejection of God and theology makes Deleuze’s thought fruitful for theologians. It represents “a very sophisticated account of what happens to truth and ethics in a system of thought that does not rely on God” (p. xxvi).

Christopher Watkin occupies a rare piece of real estate in the Venn-diagram of Christian cultural critics. As Associate Professor in French studies at Monash University in Melbourne, Australia, Watkin works in a secular research and teaching context. He does not write merely as a Christian cultural warrior, sent on night-raids from a camp of les Anglo Saxons, only to return to the safety of the seminary before sunrise. Nor does he treat Deleuze as a ruse for his own theological and apologetic agendas. He writes rather as a critical but generous resident of a world in which he has made for himself an intellectual home.

At the same time, Watkin is a rigorous reformed thinker in the Schaefferian tradition. He cheerfully and confidently brings the Bible’s voice to the table, convinced that God’s written word will not only tell the truth about God but will also divide bone and marrow, exposing the presuppositions and false dichotomies of the interlocutor.

In part 1 of the book, Watkin sets himself the patient task of Audi alteram partem, “listening to the other side,” and does so as carefully and faithfully as possible. Instead of just explaining Deleuze to Deleuzians and the Bible to Christians, Watkin says,

But how much greater the challenge, how much more tantalizing and, perhaps, worthwhile it is to seek to explain Deleuze to a readership largely unfamiliar with, and in large part suspicious of, his thought, and to seek to explain aspects of the Bible in terms of a philosopher who in the main is predisposed to reject it and impute to it all manner of hypocritical motivations and evil implications. (p. xxxi)

Watkin’s exposition of Deleuze is lucid and illuminating. (The opening section also doubles as the explanation of Plato’s thought you wish you’d been given twenty years ago.) Through his inversion of Plato’s Forms, Watkin explains, Deleuze builds a philosophical world without judgement (p. 26). Difference is everything, for no authoritative Form holds that which is different to account. All is difference, all the way down. Or, better, all the way across.

“Across” because Deleuze wants to establish a radically flat ontology, a non-hierarchical “plane of immanence.” His famous assertion that “God is a lobster” fits here. God, for Deleuze, “is part of what is, with just as much reality as anything else, including a lobster” (p. 33). His aim is not merely to reject transcendence but to “set out a plane of immanence in which the very question of belief in God is no longer relevant” (p. 49).

Deleuze’s thought undergirds a minoritarian politics. As Watkin explains, this is more than simply a politics concerned to give a voice to minorities. Majorities for Deleuze are hierarchically norm-setting. They establish the yardstick against which all others are measured and found wanting. When minorities are “given a voice” they are granted access to power by the powerful, and only to the extent that they play by the rules those in power have set (p. 72). The white heterosexual male, for example, sets the constant against which others are judged and granted their access. Deleuze’s vision, rather, is for a destabilized, fluid world, liberated from the restrictive binary categories of male and female, a world of “a thousand tiny sexes” (p. 73). If this sounds unremarkable, recall that Deleuze was offering this vision more that forty years ago. It is a good example of Watkin’s contention that Deleuze is a guide to our culture’s future.

After a careful unpacking of Deleuze, in part 2 of the book Watkin turns to the Bible. Instead of nominating a major biblical motif or a controlling doctrine from systematics, Watkin proceeds by pairing a series of biblical motifs with Deleuze’s concerns, creating a space in which Scripture often confounds and subverts, more than simply contradicts, Deleuze.

It is an extremely fertile approach. Watkin’s use of Scripture is an advance on much so-called “worldview thinking,” which tends to distill biblical ideas into concepts abstracted from the Bible’s own language, form, and story. Watkin pays Scripture the same compliment he pays Deleuze—taking not only its ideas, but its expression, seriously. We are kept tethered to what Barth called “the strange new world of the Bible.” It is rich material and repays re-reading.

Quibbles, if sought, could no doubt be found. Readers who do not share Watkin’s conservative view of Scripture might balk at the idea of “the Bible” as a single voice. More conservative readers in culture-warrior mode might find Watkin’s refusal to adopt a fight or flight posture in the face of “an enemy” discombobulating.

For a book that is simultaneously a clear introduction to a difficult but consequential thinker, and a model of principled Christian engagement, I’ve read few better. More of this, please. Highly recommended.