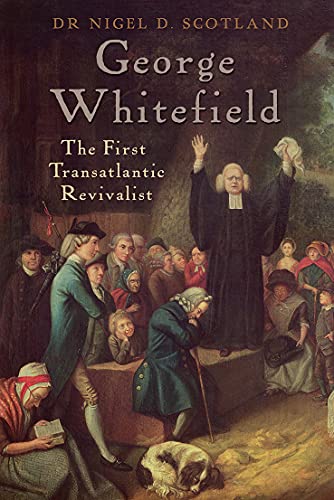 There is no shortage of biographies on the 18th century revivalist preacher George Whitefield (1714–1770). The last several decades in particular have seen several scholarly contributions to Whitefield studies including Harry Stout’s The Divine Dramatist (Grand Rapids: Eerdmans, 1991), Frank Lambert’s Pedlar in Divinity (Princeton: Princeton University Press, 1993), and most recently, Thomas Kidd’s George Whitefield: America’s Spiritual Founding Father (New Haven: Yale University Press, 2014). Nigel Scotland, honorary research fellow in religious studies at the University of Gloucestershire, is conversant with Whitefield biographies and seeks to distinguish his own work by drawing attention to Whitefield’s role in transforming the Methodism of the Oxford-based Holy Club into a national and international movement.

The book divides into thirteen chapters of 20–30 pages in length whose brevity, coupled with punctuated subheadings provides an engaging and steady pace. Scotland follows the basic historical sequence of Whitefield’s travels with several concluding chapters that deal with topical issues. The final chapters are particularly useful for readers who want a brief summation of Whitefield’s doctrine or practice.

Scotland demonstrates awareness of the controversies surrounding Whitefield’s life and ministry and engages other biographers with a firm yet genial tone. At several junctures, he notes that Whitefield’s skills as an organizer are too often dismissed by early and modern biographers alike (p. 137–38). To support this claim, he cites recent research showing that Whitefield managed three churches and that 28 societies were under his care (p. 302). As to the jaundiced assessments of Lambert and Stout that Whitefield’s effectiveness derived from his use of print media in an age of consumerism, Scotland observes that no known obituaries mention the impact of Whitefield’s writings. On the contrary, contemporaries noted his oratorical gifting (p. 212).

Scotland diverges sharply from Harry Stout’s assertion that Whitefield was driven by a craving for power, respect, and personal egotism, and that his emotionalism was insincere. Contemporary hearers, notes Scotland, attested to their belief in Whitefield’s sincerity—his tears included (p. 210–11). The author does not feign to attribute the uniqueness of Whitefield to a “vivid, almost physical sense of the presence of Christ” (p. 209). Supporting this claim ad fontes, the author draws from Whitefield’s own writings that he experienced the presence of Christ to a great degree, which he described as the “sealing of the Spirit” or “joy in the Holy Ghost” (p. 281).

In chapter 9, “preacher extraordinaire” Scotland analyzes a selection of 59 sermons by Whitefield from which he explores germane themes. The results are intriguing. For example, 27 of the sermons make no explicit appeal to sinners to be converted or make a commitment to Christ. At other occasions, however, Whitefield did make strong appeals that his hearers make a personal decision. The textual evidence thus reveals reasonable theological balance between the evangelist’s commitment to Reformed doctrine and the distinctive Methodist passion for reaching the lost.

Scotland mentions several interesting aspects of Whitefield’s life and ministry. For example, he preached without notes and believed that pastors should do likewise (p. 197). Whitefield’s practice of preaching on doctrinal themes, more so than the patterns of exposition common among Puritans, made him the forerunner to various expressions of “topical” preaching that mark much of modern evangelicalism (pp. 204–6). Furthermore, Whitefield’s dream of meeting Bishop Martin Benson in 1734 and receiving money, coupled with its subsequent fulfillment several days later (p. 30–31), serves to remind modern readers of the “charismatic” nature of the revivalist’s early days. Such details should not be overlooked by modern admirers of Whitefield with cessationist views. Whitefield’s practice of prayer prior to preaching and the degree of its intensity are noted by Scotland as indicative of the preacher’s robust devotional life. In one sermon, Whitefield said, “I have prayed a thousand times till sweat dropped from my face like rain, that God in His Infinite mercy would not let me enter the Church before he thrust me forth in His work” (p. 272).

Though a curious reader may desire further exploration of Whitefield’s politics, defense of slavery in his own words, and reasons for his shift from the mystical to the conventional, such topics are only briefly discussed. Understandably, these subjects have been given fuller treatment in other works on Whitefield, and Scotland’s citations demonstrate his awareness of such. As with any text, the question for the critic is whether the author achieved their intended purpose. Scotland achieves his two-fold task: to narrate the chronology of Whitefield’s life and describe the nature of his theology, churchmanship, and spirituality.

George Whitefield is a fine introduction for those interested in 18th century evangelicalism and an accessible read for those without a background in theological or historical studies.