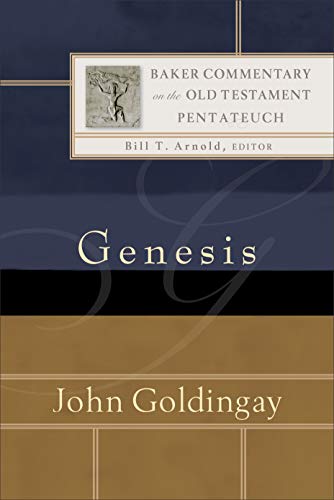 Few canonical writings are as formative to the shape of Scripture as the book of Genesis. As the first book of the Pentateuch, it is “the fountainhead from which the Bible’s ‘Torah’ (its teaching) flows” (p. ix). As such, it behooves all Christians to ensure that they have ready access to reliable resources for reading such important texts. Enter the Baker Commentary on the Old Testament (BCOT): Pentateuch. The BCOT volumes are “critically informed and respect the original discourse as well as the theological dimensions of the text. That is, the commentaries consider not merely what God originally said through the authors of the Torah but also what God is saying today through these ancient books” (p. ix). John Goldingay’s commentary on Genesis marks the first entry of this exciting new series.

The book rounds off with an impressive forty-page bibliography and three indices–author, subject, and scripture/other ancient writings. Regrettably, there is no Hebrew word index.

Concerning the translation that is used throughout this volume, Goldingay makes clear that he utilized an earlier version of his The First Testament: A New Translation (Downers Grove, IL: IVP Academic, 2018), which was then reworked as he wrote the commentary itself (p. xi). The differences between these two works, however, are (mostly) negligible.

Although some readers may quibble with the fact that all references to Hebrew are in transliteration, Goldingay’s actual engagement with the language is par excellence. He judiciously cites the standard lexicons and avoids many of the all-too-common exegetical fallacies (etymologizing, semantic overload, etc.). The commentary also uses informed nomenclature, such as wəqātal and yiqtol, pays close attention to various aspects of Hebrew syntax, and makes extensive reference to many standard reference grammars, such as IBHS, GKC, JM, and DG.

Goldingay too has an exceptional knack for keeping the concerns of the “person in the pew” at the forefront of the discussion. To be clear, throughout the text, aside from the “interpretation” sections, Goldingay also includes a number of “implications.” Racism, injustice, sexuality, the world scene, even taxes, are all addressed in these brief snippets. Goldingay’s capacity to effectively bridge the divide between the pulpit and the ivory tower is highly commendable and provides tremendous insight for the church’s ministry.

That being said, however, this commentary is not above reproach, and not a few readers will almost undoubtedly find reason(s) to nitpick and/or take umbrage with various aspects of Goldingay’s work. For instance, the sparse introduction (eleven pages) covers such matters as the overarching schema of the book of Genesis (genealogies), the origin, text, and language of Genesis, how to understand narrative, and the relationship between story and history. Concerning this last point, specifically, Goldingay states: “One of the trickiest tasks in interpretation is determining whether an author was seeking to write history or fiction. Whereas some readers of Genesis have seen it as [a] simple story, others as pure fiction, it looks more like something in between, like the Greek histories or like movies ‘based on fact’ that use imagination to bring out the significance of events” (p. 5).

These assertions, of course, have certain implications that may trouble some readers. Three examples to this end should suffice. Concerning Cain’s murder of Abel and what follows (Gen 4:1–16), Goldingay brings up some potentially complex aspects of the text, such as who Cain’s executioners might be, for instance, but then, regrettably, sidesteps the issue(s) by claiming that these chapters are (merely) “historical parables” and that “in a parable one does not press the details” (p. 102). Elsewhere, Goldingay claims that the appearance of camels in Genesis seems to be anachronistic but rather than engage with contemporary scholarship on the matter, he simply opines that “they may be another result of the story being told in terms that work for later listeners” (p. 220). Lastly, concerning Abr(ah)am, Lot, and the coalition of kings (Gen 14:1–24), one of the few accounts that refer to things within an “international context,” Goldingay maintains that though it is theoretically possible that this description “might enable one to relate the Genesis narrative to a more specific context in the time before Moses … we know virtually nothing about the individuals or the people involved in the story. It is ‘a world of its own.’ Presumably the audience suffers from the same ignorance. The narrator either has some historical information that we cannot control, or created the narrative out of an inspired imagination to make the history-like story” (p. 231).

With respect to redaction history, another possible point of contention for some readers, the following types of comments (in this particular case, relating to the Noahic Deluge) pervade the text: “we can broadly infer how some sequences of verses came from J and others from P, following clues such as their terms for God and their way of numbering the animals (P just talks of pairs of each species, J talks in terms of one pair of impure annuals and seven pairs of pure animals)” (pp. 138–39).

Aside from the above, certain other disquieting elements also appear within Goldingay’s commentary. For instance, with respect to the imago Dei, Goldingay asserts, “Genesis 1 invites people listening to the story to see male and female both together as made in God’s image and as both together designed to rule over the world, not to rule one over the other. Does it also invite people to infer that God is both male and female?” (p. 37). Elsewhere, Goldingay claims that wine ought to be understood as the means of “alleviating/lifting” the “curse” on the ground and that Noah’s “relief” was provided through viticulture (p. 120). Lastly, concerning Sodom and Gomorrah (Gen 19:1–11), Goldingay opines, “Lot does not invite the crowd to sleep with his daughters, and it’s not obvious why this would satisfy their reasons for wanting to ‘know’ the strangers. Maybe Lot is rather offering them as hostages” (pp. 304–5). Though Goldingay states that he has indicated instances at which his view is idiosyncratic (see p. xii), many readers at these points will likely scratch their head in puzzlement or shake them in bewilderment.

To conclude, John Goldingay’s BCOT commentary on Genesis is highly detailed, eminently readable, and conversant with the best of contemporary scholarship (both evangelical and critical). As such, it is of unquestionable import for all serious students of Scripture. That being said, however, Goldingay’s fairly loose stance concerning genre analysis, the lack of verisimilitude between the biblical text and historical referentiality, and other idiosyncrasies often cause one to question the integrity, reliability, and authority of the book of Genesis, as a whole. As such, though there is no question concerning the author’s scholastic capabilities or his warmth with respect to matters of theology and church life, the claim that this “landmark commentary is a rich gift to biblical scholarship and to the church” (see the back cover) seems to be far truer for the former than it would seem for the latter.