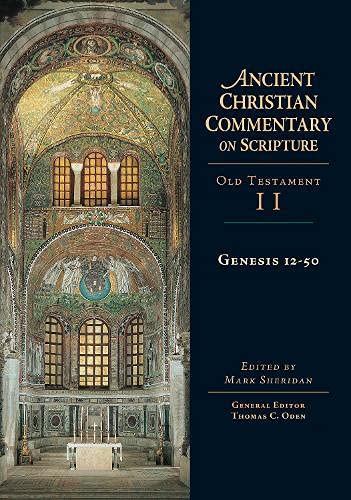 With this recent volume by Mark Sheridan the OT side of the Ancient Christian Commentary series now covers the Torah. The other completed commentaries are Andrew Louth’s on Genesis 1–11 and Joseph T. Lienhard’s on Exodus, Leviticus, Numbers and Deuteronomy. Another eleven OT volumes are projected. On the NT side slightly more have appeared: six of the thirteen projected volumes, covering Mark and all the Epistles with the exception of Hebrews. There is also a projected volume on the Apocrypha. Since Sheridan’s volume marks an important milestone on the OT side of the series and since the only review in Themelios (Gerald Bray on Romans, reviewed by J. E. McDermond) appeared in November 1999. it seems appropriate to remind readers of Themelios of this excellent resource.

According to the book jacket, the series.

does, what very few of today’s students could do for themselves … The vast array of writings from the Church Fathers—including much that is available only in the ancieng languages—have been combed for their comment on Scripture. From these results, scholars with a deep knowledge of the fathers and a heart for the church have hand-selected material for each volume, shaping, annotating and introducing it to today’s readers. Each portion of the commentary has been chosen for its salient insight, its rhetorical power and its faithful representation of the consensual exegesis of the early church.

Sheridan’s volume follows the same format as earlier volumes. There is an introductory essay which gives a short description of the Church Fathers whose works have been excerpted and an extended discussion of the interpretative methods of the fathers as they approached the patriarchal narratives. The commentary itself divides the biblical text into thematic units, which is cited in the RSV. An overview of patristic interpretation is followed by selections from the Fathers.

This commentary series is clearly of great value to ministers and students alike, and there is every reason to extend McDermond’s assessment of Bray’s Romans volume as ‘valuable’ and ‘significant’ to the whole series. Nevertheless, a few observations of a more critical nature may be noted. First, at one point a rogue appearance amongst the church father’s is made by Philo (56). Of course, the Christianization of Philo goes back well before Mark Sheridan—but it gives one pause to thought. Since Philo’s allegorical interpretation of Genesis was such an important stimulus for the father’s reflections (his shadow is present an many of the other pages) might not more indication of his influence be useful in understanding patristic exegesis of Genesis? Second, the decision to cite the RSV strikes me as slightly puzzling. Might it not have been more beneficial to have had the Septuagint or, perhaps, the Vulgate? Third, giving the biblical text does make the volumes more user-friendly, but in the OT volumes, especially the Exodus-Deuteronomy volume where patristic comments are more sparse, a great deal of space is taken up with the biblical text (even when abbreviated).