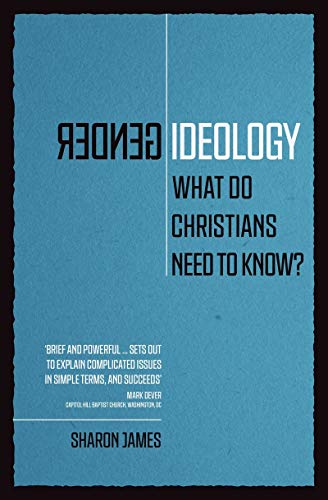 Gender Ideology: What Do Christians Need to Know?

With gender clinics in multiple countries reporting a several-thousand-percent increase in the number of young people presenting with gender identity issues, trainee doctors being taught that biological sex is a social construct, and more and more transwomen being allowed to enter women’s safe spaces and compete in women’s sports, many Christians are both confused and concerned. In Gender Ideology: What Do Christians Need to Know?, Sharon James (social policy analyst at The Christian Institute, UK) sets out “to explain in simple terms what is going on” (p. 16).

To this end, the first purpose of James’s book is to provide a critical analysis of contemporary gender ideology or, what the book elsewhere calls, gender theory. Beyond that, her hope is to help Christian readers not only “become more confident in the truth that we have been created male or female,” but to be “better equipped to protect the next generation from believing lies that lead to lasting physical and emotional harm” (p. 16).

To explain gender theory, James first turns to The Yogyakarta Principles, where “gender identity” is understood “to refer to each person’s deeply felt internal and individual experience of gender, which may or may not correspond with the sex assigned at birth” (cited on p. 38). She illustrates this understanding with reference to the widely-known cartoon figure of “The Genderbread Person,” originally developed by the artist, author and activist, Sam Killermann (see his A Guide to Gender: The Social Justice Advocate’s Handbook, 2nd ed. [Austin: Impetus, 2017], 70). In Killermann’s language, gender identity is “how you, in your head, experience and define your gender, based on how much you align (or don’t align) with what you understand the options for gender to be” (A Guide to Gender, 72). He distinguishes this from “anatomical sex,” which “refers to the objectively measurable organs, hormones, chromosomes, and other anatomy you possess (or don’t possess),” and argues that the two are “interrelated but they are not interconnected” (A Guide to Gender, 74, 77–78). In short, according to gender theory, gender identity is not determined by sex. It is this claim that James sets out to challenge.

After initial chapters on “The Global Sexual Revolution” and “‘Can We Really Change Sex?’ and Other FAQs,” chapter 3 (“What is ‘Gender Theory’?”), identifies and critiques four “false claims” entailed in gender theory: (1) “binary is bad”; (2) “gender is a spectrum”; (3) “boy/girl; man/woman are just social constructs”; and (4) “we all have a ‘gender identity’ which may be different from our biological sex” (p. 40). James follows with a series of examples of “misleading vocabulary,” all of which have been generated in order to bolster gender theory: (1) “‘Assigned’ at birth”; (2) “Transphobia”; (3) “Cisgender”; (4) “Gender”; and (5) “‘Gender Neutral Pronouns’ such as ‘ze’ or ‘hir’” (pp. 43–46). She concludes this chapter by highlighting a range of contradictions in gender theory (e.g., that gender identity is both fluid and immutable).

In chapter 4, the book takes a historical turn, providing readers with a succinct but illuminating answer to the question, “Where Did ‘Gender Theory’ Come From?” To do this, James begins by briefly outlining the contributions of “Eight Pioneers of Sexual Revolution”—Karl Ulrichs, Sigmund Freud, Magnus Hirschfeld, Alfred Kinsey, Harry Benjamin, Wilhelm Reich, John Money, and Robert Stoller—followed by two “Pioneers of Cultural Revolution”—Antonio Gramsci and Herbert Marcuse. She concludes the chapter by exploring “The Convergence of Identity Politics, Radical Feminism, and Queer Theory,” the way in which “the notion of gender fluidity has permeated our culture with astonishing speed” (p. 67), and the threat this poses to those who wish to teach the biblical truth, “male and female he created them” (p. 68).

Chapter 5 (“Male and Female—by Design”) heads in a more overtly biblical and theological direction. Its engagement with Scripture, however, is tantalizingly brief (pp. 72–79) and could easily have been developed further. Despite this, James succeeds in making note of the key texts and essential theological perspectives that inform biblical anthropology. For example, she argues that where there is “genuine gender confusion, just as where there are any other serious psychological or physical problems, it is a tragic outworking of living in a world ‘groaning’ because of the effects of sin (Rom. 8:19–22); although, as Jesus made clear, it is not to be regarded as a result of an individual’s specific sin (Luke 13:2)” (pp. 74–75). She is likewise emphatic that “our body, our mind, and our spirit or soul are not to be divided or played off against each other. God specifically designs and determines our body. It reflects His intent” (p. 78). She also follows through the implications of Jesus being raised bodily as a man and as the firstfruits (i.e., the one who guarantees our bodily resurrection): for instance, whenever “we disparage the physical body, we disparage Christ” (p. 75).

The book’s penultimate chapter, “The ‘Transgendering’ of Children,” includes a helpful discussion of both child-onset gender dysphoria and rapid-onset gender dysphoria. It also endeavors to answer the questions, “Why so much confusion?” and “What can parents do?” James’s answer to the first question is threefold: (1) the sexualization of culture; (2) family breakdown/instability; and (3) indoctrination into the idea that children can construct their own identities. Her answer to the second includes (1) teaching children God’s good design; (2) teaching them to treat everyone kindly; (3) avoiding exaggerated gender stereotypes; (4) finding out what they’re learning at school; (5) checking out what they’re reading and watching; (6) helping them to be critical of gender theory; and (7) not being fooled by false statistics about suicide.

The final chapter then contains a ten-fold call to respect, arguing that gender theory (contrary to popular belief) shows a profound disrespect for human dignity, the ecology of human nature, the Hippocratic commitment of medical professionals, the vulnerability of children, the rights of parents, the privacy and safety of women and girls, freedom of speech, those who de-transition, and, ultimately, God himself.

Gender Ideology: What Do Christians Need to Know? is a helpful introduction to what contemporary gender theory is, where it has come from, the challenges it presents to both church and society, and how Christians can begin to face these challenges. Because it is short and straight-talking, it could be faulted for sometimes lacking detail and nuance. But the book does not set out to be “a fully documented academic treatise” (p. 16). It is, rather, a cogent and accessible primer for ordinary Christians. As such, it is very helpful and much needed.