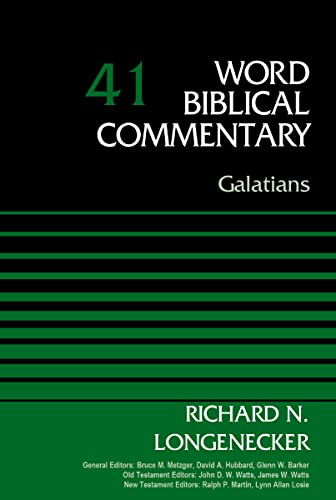 Those familiar with the scholarly contributions of Richard N. Longenecker will be eager to read his recent, substantial commentary on Galatians. Those expecting the commentary to reflect the meticulous research which has characterized Longenecker’s career will not be disappointed. The commentary contains a wonderful bibliography, both in terms of contemporary literature and ancient literature (extra-biblical and early Fathers).

Before dealing with the question of the position of this commentary in the current discussions about Paul, a word or two should be said about Longenecker’s positions on a few matters which have occupied interpreters of Galatians for some time. Longenecker rightly understands the recurring first person plural as ordinarily a reference to Jewish Christians (p. 121), rather than as a reference to Christians in general. This is somewhat untraditional, but consistent with the current growing consensus. Longenecker also assumes the non-traditional position in resolving pisteōs Jēsou, rejecting the objective genitive. Thus, with a growing number of Pauline scholars, Longenecker understands this expression as ‘the faith of Christ’. While the reviewer has not yet read a cogent lexical argument for this position, nor is there a compelling one in the commentary, it does not mar the commentary, for Longenecker’s approach is not so theological that much depends on it.

Of course, the evaluation of a Galatians commentary in the last decade of our century requires an estimation of how it fits into the many and various studies of Paul and the law which have appeared in the last 20 years. Whether this is the best time or the worst time to write about Galatians could, perhaps, be debated. Possibly nothing would do more to promote scholarly consensus than a commentary which deliberately engaged the ‘new perspective on Paul’, whether it engaged it sympathetically or unsympathetically. While Longenecker’s bibliographies make it apparent that he is familiar with what has been happening, the actual content of the commentary does not indicate that Longenecker has a definable position in the debate. With the new perspective, he is more than willing to concede that the dominant approach to understanding first-century Judaism has been incorrect: ‘First-century Judaism was not fundamentally legalistic’ (p. 86). However, it is not clear that the rejection of the more traditional approach has afforded Longenecker a convincing alternative. Indeed, the commentary is fairly traditional/ mainstream in understanding the basic problem addressed by Paul (e.g., Longenecker translates ‘those of the works of the law’ at 3:10 as ‘those who rely on the works of the law’, p. 116, emphasis mine).

Longenecker argues that Paul’s opponents were nomistic (living consistently with the law), though not legalistic (attempting to merit God’s approval by the law). Sometimes this appears to be a reference to living in some particularly Jewish way (e.g., ‘lifestyle … compatible with Jewish traditions’, p. 86), but at other places the expression ‘nomism’ or ‘nomistic lifestyle’ is more slippery, e.g. p. 159, ‘Christians … often revert to some form of nomistic lifestyle’. At the heart of the ‘new perspective’ is the belief that Torah distinguished Jew and Gentile, so that ‘nomism’ for the ‘new perspective’ is always Jewish nomism. For Longenecker, it is not at all clear, however, that his ‘nomism’ is (consistently) Jewish nomism. Indeed, it is not evident to this reviewer that ‘nomism’ has precise definition in the commentary. Yet it is at this point that one would (if interested) position himself in terms of the present discussions.

To take another example, in the discussion of the three pairs of peoples in 3:26–29, Longenecker makes a number of references to ‘old divisions and inequalities, … the inequalities … having come to an end for believers in Christ’ (p. 156), ‘old divisions’ (p. 157) and ‘former divisions’ (p. 158). Yet it is not clear whether such divisions are the general result of being unregenerate, or whether they reflect Graeco-Roman or Jewish culture, or (as the reviewer thinks) categories of people ceremonially distinguished by the laws of the Sinai covenant. Referring to these three verses as ‘Paul’s most conclusive argument’, Longenecker says: ‘For the ultimate answer to the Judaizers’ call for Gentile Christians to observe Torah is not in setting out the God-intended purpose and functions of the Mosaic law, important as that discussion in 3:19–25 may be, but to assert that “in Christ” God has done something new that puts an end to the old’ (p. 159). Consciously or unconsciously, this is surely reminiscent of E.P. Sanders’ observation that Paul’s only problem with Judaism is that it is not Christianity, yet Longenecker does not qualify the statement, or take any special pains to promote it. The reviewer finds Longenecker’s ‘solution’ scarcely more satisfying than that of Sanders. Either there is a genuine inadequacy with the Sinai covenant itself which necessitates the establishing of another (the reviewer’s understanding), or there is some genuine problem with how that covenant has been observed which necessitates drastic action (the common Protestant understanding). But God’s act in Christ is too tortuously explicated in terms of prior covenantal administrations in Galatians to permit us to believe that Paul’s most conclusive argument is merely that ‘God has done something new that puts an end to the old’. Once again, Longenecker passes up the opportunity to enter the current discussion about Paul and the law.

The analytical detail required of a modern commentator in bibliographical, historical, textual and linguistic matters is daunting, and Longenecker is, in these areas, more than satisfying. His work is a rich source of information in each of these areas, and the introductory material is clear and thorough. Indeed, in terms of the conventional expectations of a modern commentary (to assemble exhaustive amounts of data, without necessarily being theologically provocative), this commentary is an enormous success. However, there is a price to be paid for this success, and that price is in the area of a convincing theological reading of Galatians. The modern commentator who satisfies this concern is rare indeed, and this commentary is not, in this regard, rare.

Whether Galatians will receive a satisfying theological reappraisal, synthesizing the most significant insights of the last 15 years of work in the area of Paul and the law, remains to be seen. We are still awaiting an interpretation of Galatians which consciously positions itself within the present discussion in such a way as to forge some sort of consensus.

For evangelicals, the need is substantial. If the ‘new perspective’ on Paul is wrong, other evangelical scholars should join Robert Gundry and Tom Schreiner in attempting to describe precisely where it is wrong. The reviewer believes that the substance of the ‘new perspective’ is a re-evaluation of first-century Judaism (denying that it was characteristically meritorious), which has consequences for understanding Paul and the law (the ‘problem’ of the law for Paul is not meritorious misuse, but that the law, as a covenantal administration, excludes Gentiles). The reviewer is still awaiting a commentary on Galatians which distinguishes itself by interpreting the book as primarily a discussion of the respective roles of Gentile and Jew in the three covenants associated with Abraham, Moses and Christ.

There are a disconcerting number of errors in the indices, so that the pages cited are often incorrect. The reader will need to look within a page or two of the citations to find the information cited in the index. I found none further than two pages away, and most were within a page.