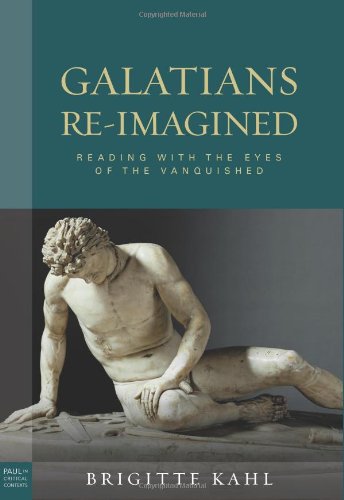 Galatians Re-Imagined: Reading with the Eyes of the Vanquished

Galatians Re-Imagined is a creative and innovative look at Paul’s letter to the Galatians as an interaction with the ideology of the Roman Empire. Brigitte Kahl, Professor of New Testament at Union Theological Seminary in the City of New York, offers a “critical re-imagination” of Galatians, which, as she explains, can include the use of “images and other visual or written sources—including spaces, buildings, performances, and rituals—to deconstruct and reconstruct our perception of the ancient world in its interaction with the ‘word(s)’ of the text” (p. 27). Kahl’s primary focus for her work is engaging in visual exegesis of the Great Altar at Pergamon (which is now on display in Berlin), devoting chapters 1–5 to the implications of this enquiry, followed by a final exegetical chapter and an epilogue.

Perhaps the most intriguing element of Kahl’s visual exegesis is how it relates to the depiction of Gauls/Galatians during the Roman Empire. As she notes, the Gauls were portrayed as the conquered—the lawless barbarians placed under the rule of Rome (pp. 31, 51). Furthermore, they were often depicted as Titans and Giants, which ideologically set the subjugation of Rome’s enemies against the mythic backdrop of the Gigantomachy (pp. 82–83, 95). In fact, this is precisely why the Great Altar at Pergamon is relevant for Galatians, according to Kahl, because the defeat of the Giants depicted there is a mythological depiction of Rome’s defeat of the Gauls. Thus, Kahl’s interpretation of Galatians is conducted through “intertextual synopsis” with the Great Altar, recognizing that Paul was writing to a vanquished people under Rome’s rule.

Kahl’s approach to Galatians is in many ways ingenious. It is certainly valid to consider evidence from the ancient world beyond the textual. As she claims, this also provides helpful insight into the beliefs and prejudices of the illiterate. However, there are no methodological controls given for Kahl’s analysis. If criteria had been given, certainly provenance and distance should have been factors. One wonders how relevant for Galatia—whether in the North or the South—a monument in Pergamon would be. Regardless of method, Kahl’s visual exegesis of the Great Altar does very little to bring clarity to the letter of Galatians and in many ways unnecessarily distorts its meaning. Moreover, Kahl admitted at the outset of the book—through the retelling of a touching story—that her rereading of Galatians is motivated by a post-Holocaust aversion to anti-Semitism (pp. 13–15). While I do not wish to be insensitive, I suspect that Kahl’s motivation has also caused her to skew the evidence in Galatians. Many examples could be proliferated, but these are the most crucial: (a) the “law” being disputed in Galatians is not the Mosaic Law in itself, but the law of Rome in disguise (see pp. 9, 217, 226–227); (b) the “works of law” are “works of imperial violence and competition” (p. 262); and (c) justification is de-Judaized and placed within the framework of “Roman imperial ideology” (p. 75). Thus, the central issue in Galatians for Kahl becomes disputing imperial monotheism (p. 166), and the “other gospel” being preached in Galatia is imperial salvation (p. 255). Although these issues are massive and cannot be addressed in detail here, allow me to briefly say this: Kahl’s interpretation of Galatians at best provides an insight into how the letter could have been misunderstood by Paul’s audience, but it does not provide insight into the intended meaning of Galatians. It is unreasonable to suggest that “law” and “justification” should be given Roman connotations in Galatians without any hint from the letter itself that this is the case. As one counterpoint among many, in Gal 3:10 “works of the law” are defined in relation to the Mosaic law as the citation of Deut 27:26 makes explicit in reference to the “book of the law.” The central issue that Paul is addressing in Galatians is the role of the Mosaic law for Gentile Christians. It is a sociological and theological problem related to the expanse of the gospel to the Gentiles through Paul’s ministry.

The two texts that offer a potential connection between Galatians and an imperial background are Gal 4:8–10 and 6:12–13. According to Kahl, the problem behind the text of Galatians is social dislocation (pp. 220, 222–223). Before embracing circumcision, the Galatians must pay their civic duties by observing the pagan calendar (cf. Gal 4:10) because only the Jews are exempt from these observances, and only circumcision is definitive proof of one’s conversion to Judaism (since Christianity would have been perceived as a Jewish movement). I find the arguments for a pagan calendar in Gal 4:10 unconvincing since contextually it makes far more sense as a reference to the problematic observance of the Jewish calendar by Gentiles. Indeed, this is consistent with Paul’s polemical equation of the illegitimate practice of Jewish custom with paganism elsewhere (Gal 5:12; Phil 3:2) and also makes sense of Paul’s seemingly random references to the στοιχεῖα in this context (Gal 4:3, 8–9).

In regards to Gal 6:12–13, Kahl suggests that those who were persecuting the agitators were civic magistrates enforcing the imperial observance (p. 226). I would agree that the impetus for the agitators’ actions—persuading the Galatians to receive circumcision—is at least partially related to social pressure from local authorities. This provides a reasonable explanation for Paul’s words in Gal 6:12 that the agitators are seeking to evade persecution by persuading the Galatians to be circumcised. Since Paul would be highly unpersuasive if this reference was an exaggeration, I would agree that imperial pressure is likely in the background. In order to make sense of the reference to persecution (if it is not an exaggeration), it is probable that the unnamed “third party” assumes some level of social deviance or seditious behavior, and this provides a reasonable explanation for their actions. Yet admitting this point is not the same as suggesting that Paul’s interactions with the agitators includes an intentional critique of imperial ideology. Paul’s priority in Galatians is to critique the actions and the teachings of the agitators, which Paul claims is motivated by a desire to avoid persecution. Rome is merely the social impetus, not the theological foil.

In Galatians Re-Imagined, Kahl commendably undertakes a novel enterprise that will undoubtedly be stimulating for those interested in the political and social-historical background of Galatians. I am especially intrigued to see how “critical re-imagination” and non-textual hermeneutics will be developed by biblical scholars in debt to Kahl. Although I do not find it persuasive, Kahl’s work is critically engaging and worth a serious read.