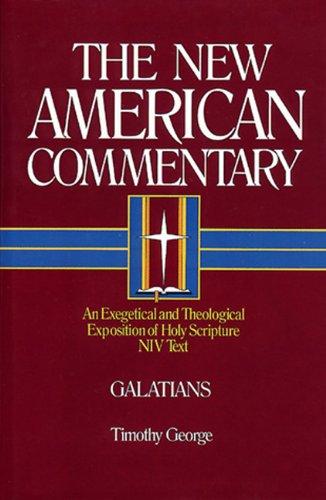 This is one of the first NT volumes in a forty-volume series on the whole bible based on the NIV. Like the NIC series, it is solidly evangelical in orientation and directed toward both educated church members and those with vocational theological training. This means that more technical discussions are in the footnotes and are thereby limited in length due to the format. While this makes for smoother reading in the body of the text, those who want more technical discussions will be a bit frustrated. However, as a dual-focused commentary (and series), this format works well.

Stylistically, this commentary (and series) emphasizes ‘how each section of a book fits together so that the reader becomes aware of the theological unity of each book, and of Scripture as a whole’ (p. 8). There is a resulting concentration upon ‘theological exegesis, while providing practical, applicable exposition’ (p. 9). This helps explain why the editors chose a church historian (and dean!) with expertise in the Reformation period as the commentator. As a purist (i.e., NT scholar), I may want to quibble over such a choice, but in light of the focus and emphasis of the series, Timothy George is a delightful selection. He constantly brings interesting insights from the history of interpretation that specialists in other areas might not have. While there are downsides to such a choice, one can look to other commentaries on Galatians for such discussions (e.g., Longenecker, or Betz). Therefore, the uniqueness of this commentary amidst the plethora of works on Galatians is its theological sensitivity and regular reflection upon the history of the interpretation of Galatians.

Perhaps of more foundational importance is Dean George’s stance on the ‘new perspective on Paul’ with its far-reaching implications for the interpretation of Galatians. The new perspective redefines the inherent legalism and works of righteousness of first century Judaism as more an issue of ‘covenantal nomism’ which emphasizes the identity markers and boundaries of the covenant people. If this is a true picture, the Paul is not combating a classic works-righteousness view of entry into salvation in Galatians, but rather the Judaizers’ wrong understanding of the identifying marks and behavioural restraints of those who are already within God’s covenant people. While George leans to the former, he at least interacts periodically with the latter. However, such interaction has not profoundly moved him from the traditional understanding of Judaistic legalism.

George’s tone is refreshingly warm and passionately orthodox throughout his commentary. This is invigorating and commendable and gives his comments more heart and personality than most expositions. This texture plus his insights from historical theology make this a helpful volume to own. Should it be added as a ‘must-have’ eighth to the outstanding seven now available in English (Lightfoot, Burton, Bruce, Betz, Fong, Longenecker, and Dunn)? Perhaps, but for different reasons: not on the creative strength of the expositions, but on the sensitivity to theology and the history of interpretation. Such sensitivity makes this a useful additional to those who own two or three of the other works.