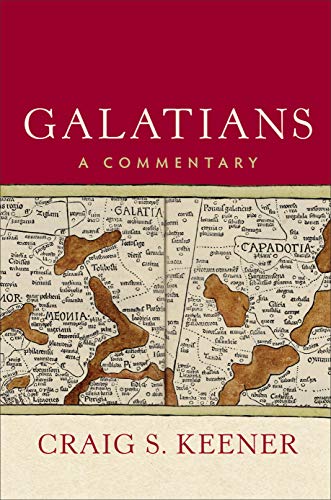 Craig Keener has gifted us with an engaging, cogent account of Paul’s letter to the Galatians with a remarkably strong description of its historical-cultural background. Physically, at 848 pages, it is a substantial hardback, with generous font sizes, and equally generous line spacing and margins, which make for a comfortable reading experience. This Baker Academic commentary is a fuller version of Keener’s briefer account of Galatians in the New Cambridge Bible Commentary (Cambridge: Cambridge University Press, 2018)—more on this later.

Keener opens his commentary by offering us a fresh rendering of Galatians into English, and reading his translation with the Greek open beside me alerted me to issues in the text I’d overlooked previously. His introduction covers familiar territory well, especially issues of date and destination, and the relationship of the letter to Acts. Keener opts for a date after the Jerusalem council (Acts 15) but in the early 50s AD. In defending a southern destination Keener does indulge in quite a bit of description of the Celts of the northern part of provincial Galatia and hardly anything on the nature of the southern towns to which he ultimately thinks the letter is addressed. As a Celt myself I don’t begrudge this attention, but I think the Phrygians get short-changed. Given the importance of Galatians for the late twentieth century resurgence of interest in Pauline rhetoric and epistolary theory, Keener’s measured hesitancy about both is notable. To call the footnoting of ancient sources and modern interlocutors extensive is to underplay the sheer volume of referencing both in the introduction and throughout the commentary proper. A fully hyperlinked digital edition would be a treasure trove!

As for the commentary itself, Keener’s pellucid prose guides the reader to his evaluations. Shaded backgrounds highlight the portion of text under discussion. His comments largely avoid detailed interactions with other commentators, but his footnotes extensively document the opinions pro and con from the early church, through the Reformation, to contemporary scholarship. While not a work focused on reception-history, this commentary makes (largely) judicious use of the ongoing work of others in that field. From time to time he offers “Bridging Horizons” in shaded text boxes that reflect on the contemporary application of Paul’s message in the letter, but they do not cover every section of the letter. And like a good many other commentators on Galatians, Keener has given us a set of excursuses. There’s a PhD out there on the excurses on Galatians ranging from Martin Luther’s classic work to J. Louis Martyn’s extensive “comments” and now Keener’s formidable contribution! His thirty-three excursuses range over historical-cultural, theological and interpretive issues including the Πίστις Χριστοῦ debate, justification, and “the New Perspective on Paul.” Keener’s own reading falls within the Protestant mainstream, mediating between typical evangelical views and the New Perspective, an approach Michael Bird has broadly characterized elsewhere as a “chastened Old Perspective.” Without giving too much away, I was however gratified to see that Keener, along with a number of other recent commentators on Galatians, decided on the objective genitive interpretation of “Christ-faith.”

Despite this commentary’s apparent size there are a few things that it will not do for you. First of all, there is precious little by way of textual criticism. The NA-UBS text is virtually uniformly taken as read. One will have to go to the older commentators or the more recent monographs for consideration of the alternatives. Second, Keener has chosen not to dwell significantly on matters of grammar and syntax. His isolated discussions here and there demonstrate his competence, for instance in the excursus on “Christ-faith,” but he has opted to focus more on the historical-cultural backgrounds and in articulating his understanding of the intent of Paul’s letter. Third, Keener’s Galatians does not catalogue and analyze the interpretive options in the manner of Cranfield’s celebrated Romans. Clearly, Keener is well read, and his choices are eminently sane. His extensive footnotes are an entry point to the scholarly discussion, but he relatively rarely teases apart and puts back together again some of the finer points of interpretive difference. These are not so much criticisms but rather observations as to where Keener has chosen to focus his energies.

Finally, what about the relationship of this work to his briefer commentary? From my limited sampling I would estimate that about 70% of the text of the longer work is found in the shorter. The Baker Academic commentary includes Keener’s own translation, more excursuses, and much more extensive documentation in the notes (see pp. xi–xii). For those keener on the interpretation alone the Cambridge edition will suffice; those seeking the cornucopia of data and discussion will want this edition.