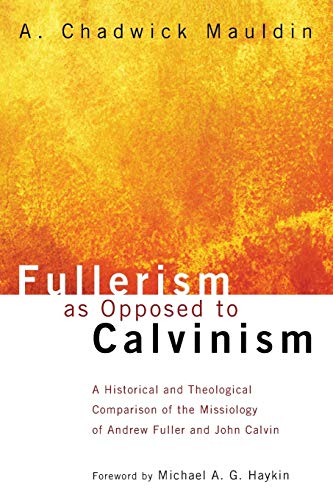 Fullerism as Opposed to Calvinism: A Historical and Theological Comparison of the Missiology of Andrew Fuller and John Calvin

Written by A. Chadwick Mauldin Reviewed By Nathan A. Finn
History and Historical Theology

Andrew Fuller (1754-1815) is among the half-dozen most influential theologians in the Baptist tradition. One of the areas Fuller most shaped Baptists and other evangelicals is missiology. He popularized Edwardsian Calvinism among the British Particular Baptists, who applied these theological emphases to global missions. Fuller's ideas, which his better-known friend and missions pioneer William Carey owned, then spread to other evangelicals in Britain and North America, helping to inaugurate the modern missions movement in the English-speaking world. In his short monograph Fullerism as Opposed to Calvinism, a revision of his MA thesis at Southwestern Baptist Theological Seminary, Chadwick Mauldin argues that contemporary Calvinistic Baptists should consider jettisoning the “Calvinist” and “Reformed” labels and instead more self-consciously identify with “Fullerism,” which is a better fit for reasons of history, identity, and especially missiology.

Mauldin builds his case by contrasting Calvin's doctrine and missiology with that of Fuller, a Baptist who self-identified as a Calvinist. He argues that Calvin's missions efforts, though sincere, were tepid compared to his historical contemporaries, the Anabaptists. Fuller, who as a Baptist enjoyed considerable ecclesiological affinity with the Anabaptists, combined their emphasis on cross-cultural evangelism and church planting with a broadly Calvinistic soteriology, embodying something akin to a balanced middle between Calvin and the Anabaptists. Hence, contemporary Calvinistic Baptists should identify with Fuller, whom they closely resemble, rather than Calvin, who when viewed through the lens of Fuller was ecclesiologically aberrant and missiologically insufficient. This is a well-worn argument made by some Baptists and some Reformed pedobaptists; Mauldin's contribution is adding the missiological element to the debate. Mauldin also includes an appendix that records a lengthy interview with James Leo Garrett, the dean of Southern Baptist theologians. It's hard to determine exactly how familiar Garrett is with Fuller's theology based on his comments, though he seems to be in general sympathy with Mauldin's thesis.

Mauldin makes a good case that contemporary Calvinistic Baptists are more akin to Andrew Fuller than John Calvin; it seems doubtful anyone questions that reality. Whether Baptists should abandon any identification with the Reformed or Calvinistic tradition is an altogether different matter. Calvinistic Baptists argue that they are Calvinists with a baptistic “twist”; their commitment to credobaptism and congregational polity differs from the pedobaptism and Presbyterian polity that characterizes most (though not all) Reformed groups. The very terms “Calvinistic Baptist” or “Reformed Baptist” imply as much. In terms of missiology, while Fuller may be a better role model than Calvin, it seems unusual to pit Fuller against Calvin since Fuller understood himself to be in substantive (though not uniform) continuity with Calvin. It also seems unusual to restrict this argument to Baptists. By Mauldin's logic, Reformed pedobaptists who emphasize missions should also abandon the Calvinist label because they have a stronger missiology than Calvin.

The Reformed tradition is anything but monolithic. While Calvin is the most well-known Calvinist, he is hardly the benchmark for all things Reformed, including Reformed missiology. Mauldin fails to account for missiological development within the Calvinistic tradition-of which Fuller was very much a part! Mauldin adequately demonstrates that Fuller and Calvin were not identical in their missiological emphases, which is a given, but he will likely convince few readers that Calvinistic Baptists should therefore drop the modifier. Most who adopt the Calvinist or Reformed labels do so for reasons unrelated to missiology, or, for that matter, the convictions of John Calvin himself.