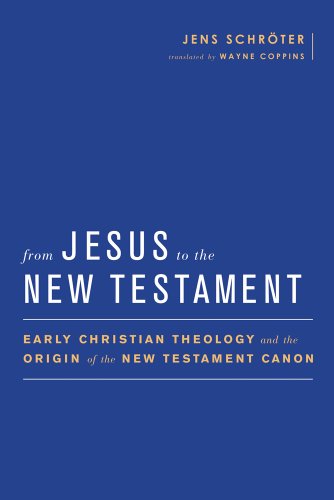 This study, originally published as Von Jesus zum Neuen Testament (Mohr Siebeck, 2008), is the inaugural volume in the new series Baylor-Mohr Siebeck Studies in Early Christianity (series editors are Wayne Coppins and Simon Gathercole). The purpose of the series is to make German research available in English translations in order to facilitate increased dialogue between German and English scholars. Schröter’s volume is a collection of essays and articles that were written between 2000 and 2006 and have been edited so that they coordinate with one another around a common theme, namely, “the question of what the Christian understanding of reality is founded on and how this understanding, which has its foundation in the writings of the New Testament, can claim a place in the discussion of the interpretation of reality” (p. xiii).

The book is divided into four parts. Part one deals with methodologies and theories of history. Schröter takes the reader on a helpful survey of some of the seminal thinkers dealing with the science of history, including Johann Gustav Droysen, Paul Ricoeur, Max Weber, F.C. Baur, Friedrich Strauss, and others. In these chapters, Schröter is largely concerned with challenging positivist (and naïve) conceptions of history that assume that historical accounts provide direct access to the past. On the contrary, “Every historical text is therefore simultaneously an interpretation of the events that it transmits. It does not mediate a direct access to the past but one that is guided by the perception of its author” (p. 25). For Schröter, history is always “perspectival” in nature (p. 23), meaning it is conditioned by both the author of the historical account and the modern interpreter of that historical account (p. 34).

On one level, Schröter’s analysis is certainly correct—historical study is not a neutral affair, free of the interpreter’s own perspective and reconstruction of meaning. However, at times Schröter leaves the reader with some uncertainty about whether (or to what degree) the historical claims of early Christian writings really do connect to actual events. For instance, after a very helpful rebuttal to criticisms about the authenticity of Paul’s speech at the Areopagus in Acts 17, he then states, “This is not, of course, to claim that Paul actually delivered or would have delivered a speech such as that in Acts 17” (p. 46). Instead, the speech is “a configuration of the historian Luke” (p. 46). Thankfully, Schröter applies this same approach to the claims of historical criticism. Whenever critical scholars try to bore beneath the text to uncover what “really happened,” he argues that such a reconstruction is also conditioned by the scholar’s own perspective and thus “does not lead to ‘actual historical fact’” (p. 30).

Part two of the book begins an analysis of early Christian traditions found in the Gospels, Paul, and Luke. Schröter begins by analyzing the earliest Jesus traditions we have, focusing largely on the Q tradition and the isolated sayings of Jesus in Paul. He then offers a critique of the more radical scholars (e.g., Strauss and Bultmann) who claim that the Gospels have no historical value at all, and suggests instead that the Gospels must be critically examined to see what their value actually is. At this point, Schröter uses the Gospel of Mark as a test case and offers a helpful defense of its historical value, commenting on its historical consistency, plausibility, and even geographical accuracy. But, again, he is quick to qualify this defense of Mark’s historical value, “This is by no means to say that the events in Galilee took place as they are depicted by Mark” (p. 122). Elsewhere he is even more to the point, “It becomes clear that they [the Gospels] are narratives that are based on a combination of historical memory and myth” (p. 130, emphasis his).

Still in section two, Schröter spends two chapters on the law and Christology in Paul, and two chapters on Luke-Acts, particularly on Lukan Christology. These chapters mark a decided shift from discussions of historicity to discussions of early Christian theology (except portions of chapter ten which focus on Luke as historiographer). The material in these chapters is helpful, insightful, and well engaged with both modern and earlier scholarship. However, the place of these chapters in the overall argument of the book is less than clear. At this juncture, the reader is reminded of the fact that these chapters were once distinctive articles and were not originally written to appear in the same book. Sure, all these topics broadly play a role in the development of early Christianity, and can rightly be placed under that large umbrella, but they seem somewhat out of place within the structure of the book.

In section three, Schröter enters into more formal discussions of the New Testament canon. He provides a very helpful summary of the major issues in the development of the canon, ranging from the usage of the term, to discussions of how the Gospels were (or were not) cited in the Apostolic Fathers, to the usage of various apocryphal writings, including the Gospel of Peter, Gospel of Thomas, Egerton 2, and the Gospel of Mary. His chapter on the canonical history of the book of Acts is particularly helpful, and he even covers its appearance in major canonical lists and significant papyri and codices. My only significant disagreement is with Schröter’s assessment of the state of the New Testament text during this time period. Along with Ehrman and Parker, he characterizes the transmission of the text as “astonishingly free” (p. 268) and argues that the Jesus tradition was “a free and living tradition” (p. 265). A fundamental problem with Schröter’s analysis is that he makes no distinction between literary productions that happen to use (and perhaps reform) early Christian tradition, such as P. Egerton 2, and the copying of books by early Christian scribes. These are two different literary phenomena. When it comes to the latter, there is little evidence that scribes were as loose with the text as Schröter implies. This issue cannot be resolved here, but I refer the reader to the collection of essays in C.E. Hill and M.J. Kruger, eds., The Early Text of the New Testament (Oxford: OUP, 2012).

The fourth and final section of the volume addresses the unity of the New Testament writings and whether they produce a coherent, unified theology. In order to address this challenge, Schröter distances himself from what he regards as two extremes. On the one hand, we cannot, like Wrede, do away with the canon and replace it with a historical-critical reconstruction. On the other hand, we cannot, like Stuhlmacher, exaggerate the unity of these writings and appeal to theological dogma like the doctrine of inspiration. How, then, do we solve the problem of contradictions and disagreements in the New Testament? Schröter ends up offering a “canonical interpretation” of early Christian writings where the limits of the canon are honored because it represents the faith deposit of the early church, and, at the same time, the critical problems with the individual books are still recognized. This via media is achieved by the belief that “one must distinguish between the historical status and the canonical status of the New Testament texts” (p. 331). Although Schröter does not make the connection, his view ends up being very similar to that of the “canonical criticism” model of Brevard Childs and, to some extent, James Sanders. As such, he leaves the reader with a lack of clarity regarding what real authority these books can really bear for the church.

As a whole, Schröter has left us an interesting and worthwhile volume exploring the nature of early Christianity and the New Testament canon. While I have a number of disagreements throughout, it is a well-argued and well-researched study that all scholars of the New Testament should read.