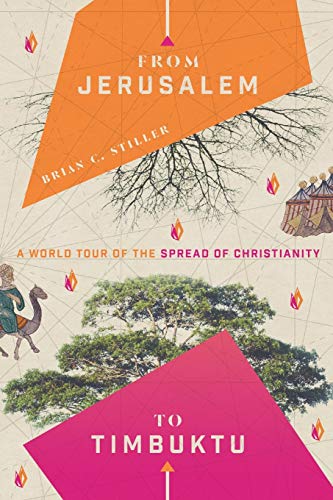 From Jerusalem to Timbuktu: A World Tour of the Spread of Christianity

Brian Stiller serves as a global ambassador for the World Evangelical Alliance (WEA). In From Jerusalem to Timbuktu, he gifts readers with a celebratory survey or “world tour” of the global demographic shift in contemporary evangelicalism. “Raised in the home of a Pentecostal church leader” (p. 2), Stiller writes from a Pentecostal vantage point, which is instructive given that “in some countries Pentecostals make up more than half of Evangelicals” (p. 2). Serving over 50 years in various evangelical ministries, he evinces a large-hearted, big tent perspective. He explicitly locates Pentecostalism as a subset of evangelicalism.

From Jerusalem to Timbuktu has a conversational tone, though it engages much missiological literature. It is a helpful introduction to the emerging academic field of “world Christianity.” The endnotes and extensive bibliography bear this out. The author, subject, and Scripture indices serve readers well. The book is at times poetic. The reader stumbles upon the occasional pithy or eloquent sentence. For example, “I was born with a Bible, in my language, in my hand” (p. 18), and “The Bible text is made holy when inhabiting other tongues” (p. 71).

Young Restless Reformed types should listen humbly to Stiller in order to recognize the sovereign grace of God at work in the midst of messiness and to learn what they might before they criticize. Understanding contrary convictions or interpretations fosters greater awareness and sympathetic, mutually edifying fellowship. They should not set the book aside after sifting through the second chapter, the chapter most colored by Stiller’s own theology. Besides, Stiller does not uncritically reflect on “aberrant forms” of Christian faith that exist (p. 68). He says syncretism is “a legitimate fear” (p. 85).

The author’s preface and epilogue frame the “world tour” well. He suggests such an overview has relevance for the reader’s faithful discipleship. Stiller’s thesis is “faith is on the rise” (the title of chapter one). The first chapter is a good, succinct survey of evangelicalism on each major continent. The bulk of the book, chapters two through six, comprise focus on five “drivers” that are “growing and reshaping” the church (p. 2).

Chapter two, “The Age of the Spirit,” is a brief and simplistic historical survey of pneumatology (pp. 24–28). Stiller claims that an increasingly rational approach to Scripture in the early twentieth century by evangelical scholars “added salt to the broad popular thirst for a Spirit-enabled faith” (p. 30). While painting a dire backdrop for the redemptive emergence of Pentecostalism, Stiller avoids any undue critical tone. He graciously affirms even those with whom he seriously disagrees. He notes that the Charismatic movement has been a bridge between Protestant denominations and even between Roman Catholics and evangelicals (p. 42). Charismatic and Pentecostal believers are now a “global force” fueling a “spiritual revolution” of enthusiasm and religious entrepreneurship (pp. 44–47).

In chapter three, “The Power of Bible Translation,” Stiller revels in the fact that “Christianity is a translated faith, and a faith translated” (p. 53). Bible translations enable the Christian faith to fully “live in the neighborhood” of believers from every tribe and tongue (p. 55–59). It positively impacts cultures and societies by dignifying dialects, revitalizing local cultures, and equipping various peoples for navigating our post-colonial world. He integrates missions history, translation theory, theology, and statistics concerning translation needs and progress.

Chapter four, “Revolution of the Indigenous,” concerns the importance of locally grown leaders and their ideas for the deep seated and serial diffusion of Christian faith across cultures. Stiller briefly contrasts the supposed “old model” of doctrine-oriented and missionary-led church planting with the “new model” of self-governing, self-funding, self-propagating, and self-theologizing (pp. 78–81). He briefly presents a theology of contextualization (pp. 84–87). He too uncritically names the insider movement among Muslims and Hindus an “exploratory” method of evangelism (p. 85). Yet, this chapter well represents the most seminal studies in world Christianity and missions history.

In Chapter five, “Re-engaging the Public Square,” Stiller sketches three “major ideas” that have historically influenced evangelical perspectives on Christian engagement with the public sphere: a Christendom model, Calvinism, and Wesleyanism (p. 104). It isn’t clear how these models relate or synthesize with contemporary majority world evangelicals. But he says, “Many Christians now sense the Spirit calling them to be present in public forums” (p. 104). Social engagement by evangelicals around the world today is “inevitable” for four reasons: sheer numbers, the growth of churches and their influence, political influence as voters, and, “oddly,” he says, our pursuit of self-interest (p. 108).

Chapter six, “The Power of the Whole Gospel,” addresses global evangelicalism’s embrace of every aspect of life in each local context. These include one’s broader culture, the unseen spirit world, and the entire human experience, such as the physical and psychological. The chapter surveys evangelical relief and development organizations. Readers get a word on the contribution of Latin American missiologists who pushed North American leaders to a more fully biblical definition of missions and discipleship at Lausanne 1974.

This chapter provides a well-qualified treatment of prosperity theology. Stiller acknowledges both the legitimate longings that compel someone toward it and the “flagrant abuses,” “silliness,” and “enormous biblical flaws” often committed by its promoters (p. 152). Prosperity theology has “attracted a deservedly bad reputation” (p. 152). He asserts, “Like it or not, this movement has become a lathe on which Christianity, not only in Africa but much of the world, is being shaped” (p. 152). Stiller claims that “as the church grows and is revitalized, heresy is almost always a byproduct” (p. 153).

The book’s concluding chapter consists of succinct primers on prayer movements, women in ministry, praise and worship, refugees and migration (“a human tidal wave”), and persecution. Stiller asserts that US women did “an end run around church policy” by using their gifts and abilities on foreign mission fields in the early twentieth century (p. 172). But he carefully notes that several organizations explicitly recruited by appealing to women’s willingness to go to hard places (p. 175). Stiller presents the composition and singing of new worship songs as a kind of translation with indigeneity of style and leadership (pp. 178–79). Furthermore, Stiller argues convincingly that “migration redefines the world” (p. 195) and that the dynamics of persecution are more complicated than popularly understood.

This book was born from Stiller’s search for factors during his own lifetime that have driven the church’s growth in the majority world. He ably documents and describes the story of global evangelicalism with scholarship, local vignettes, and personal anecdotes. Our generation of young evangelicals, he says, sees a world and a church without borders (p. 111). From Jerusalem to Timbuktu is a useful primer for making college and seminary students—and current pastors—more aware of God’s grace at work in the world through Christian sisters and brothers whom they have hardly considered.