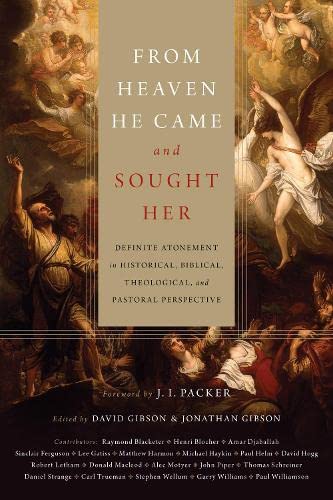 In 2006, A. T. B. McGowan observed that “many pamphlets have been written” on the extent of the atonement, “but few full-scale studies have been undertaken” (“The Atonement as Penal Substitution,” in Always Reforming: Explorations in Systematic Theology [ed. A. T. B. McGowan; IVP Academic, 2006], 209.) Eight years later, McGowan’s point can no longer be maintained. With the publication of From Heaven He Came and Sought Her, David and Jonathan Gibson have given the church a definitive argument for definite atonement.

While interaction with each section, let alone every chapter, is beyond the scope of this review, I will outline the contents of the book, keying on its breadth of scholarship and its method of argumentation. At the end, I will consider the potential effect this volume might have.

From the four-fold subtitle, it is apparent that From Heaven He Came and Sought Her aims to be comprehensive. And from my reading, I believe they have hit their mark. While not the multivolume work they had originally planned (p. 19), this book is remarkably thorough in its treatment of definite atonement.

After an introductory essay (ch. 1), the editors have compiled historical studies on subjects ranging from the ancient church to John Owen (chs. 2–8). A cadre of leading biblical scholars has queried the OT and NT to discern how Scripture speaks of the particular and universal features of the atonement (chs. 9–14). In the theological section, questions concerning the divine decree, the Trinity, and the relationship of penal substitution to definite atonement are thoroughly addressed (chs. 15–20). Finally, in the last section pastoral concerns regarding missions, assurance, and preaching are explained to show how practical definite atonement is (chs. 21–23).

All in all, there is little that is not covered, and for that reason, it is appropriate to describe the book as “encyclopedic.” Until the publication of this book, bibliographic information was disparate and introductions to all the names and controversies were incomplete. As I wrote my dissertation on the matter, I continued to find old works from different countries, written in different eras that had defended or rejected the doctrine.

With this book, however, researchers—for and against definite atonement—are furnished with an encyclopedic reference to the most important names and debates in church history. This is clearly the case in the historical section, but it continues in the exegetical and theological sections as well. For instance, Donald Macleod addresses Barth’s supralapsarianism, as well as explaining the various forms of hypothetical universalism held by Edward Polhill, Richard Baxter, John Davenant, and Moises Amyraut. Likewise, Garry Williams takes on John Davenant’s argument concerning “bare sufficiency,” along with D. Broughton Knox’s concern about a bona fide offer of the gospel. In short, From Heaven He Came and Sought Her functions as the most thorough work on the debate—from either side.

That said, the book is not exhaustive. There are other strong defenders of definite atonement only mentioned in passing (e.g., Hugh Martin, George Smeaton, T. J. Crawford) and still others who are not included at all (e.g., Robert Smith Candlish, James Haldane, Howard Malcolm, William Symington). On the other side, there are theologians who reject definite atonement that are left out of this book (e.g., James Fraser, Thomas W. Jenkin, Ralph Wardlaw). Honestly, this is not a major fault. It simply recognizes the vastness of this literature, and it reiterates the value of this volume to supply the reader with the best place to begin research.

Still, the book is not a reference work. From start to finish the book is making the case that “the death of Christ was intended to win the salvation of God’s people alone” (p. 33). Each chapter adds to the argument, with varying degrees of passion and persuasion.

In contrast to Owen’s polemical The Death of Death in the Death of Christ, the presentation here is more measured. For instance, in Michael Haykin’s chapter on the ancient church, he concludes by saying, “some of the key arguments used by late sixteenth- and seventeenth-century Reformers in defense of definite atonement are clearly present in seed form in the ancient church” (p. 74). However, he restrains himself from saying too much in his chapter. His chapter, like some of the others (for instance, Paul Helm’s on John Calvin or Lee Gatiss’s on the Synod of Dort), does not say more than what evidence can support. This approach gives credence to the book, and secures its academic contribution. The authors are not simply trying to win a debate; they are furthering our understanding of church history.

Of all the outstanding features of the book, its rigorous consideration of the biblical text is the greatest. While the doctrine of definite atonement has been termed “a textless doctrine,” and one that Christians would never come to from reading the Bible (p. 35), From Heaven He Came and Sought Her is one long extended exegetical study. In the historical section, the contributors wrestle with the history of interpretation on key texts like 1 John 2:2; in the biblical section, the authors make arguments from a thick reading of Scripture; and in the theological and pastoral sections, the theology espoused is replete with Scripture.

While some opponents will remain unconvinced because they cannot find a verse that says Christ died for the elect only, it is impossible to claim definite atonement is a doctrine created by logic and not Scripture argumentation. For instance, as Garry Williams explains the idea of “double payment,” he first develops the doctrine from a close reading of Leviticus, before turning to the way metaphors work in the Bible. In the end, he defends the double payment argument by quoting John Owen himself, who cautioned against the wrongful use of the commercial metaphor (pp. 510–12). Likewise, Jonathan Gibson spends nearly one hundred pages grappling with Paul’s particularity and universalism and the Trinitarian nature of his soteriology, and Tom Schreiner addresses the knotty theological implications of the “problematic texts” in the Pastoral and General Epistles. Such patient exegesis raises the bar for theological discussion. After this work, it should be agreed that lists of proof texts are insufficient for proving or rejecting the doctrine.

In the end, what shall we say about this new work of scholarship? Michael Horton has said that it is “the most impressive defense of definite atonement in over a century.” Based on the contributors and the content of From Heaven He Came and Sought Her this seems like a fair appraisal, but it is worth asking a further question: Is it the best articulation of definite atonement ever? To date, that mantle has been reserved for John Owen’s The Death of Death. Of which, J. I. Packer once said, “It is safe to say that no comparable exposition of the work of redemption as planned and executed by the Triune Jehovah has ever been done since Owen published his. None has been needed” (“Introductory Essay,” in The Death of Death in the Death of Christ [Banner of Truth, 1959], 12–13).

While that sentiment may persist among some (others no doubt have dismissed Owen for a number of reasons), there is the possibility that this new volume may in time eclipse that of Owen. For one reason, its format and writing style is much easier to read. For another, it improves upon the work of Owen. Moreover, the multiple chapters from a wide selection of biblical scholars, theologians, and pastors provide the strength of twenty-three witnesses, not just one. More academically, this volume has the advantage of being up-to-date on its sources, interpretations, and theological questions. A lot has happened since the seventeenth century, and From Heaven He Came and Sought Her ably handles nearly all the major controversies. Last, the weight of the argument stands on seven-hundred pages of biblical exposition and biblical theology. For all those reasons, the volume compiled and edited by the brothers Gibson is a great gift to the church, especially to those who delight in the doctrine of definite atonement.

Of course, it is still too early to tell what the impact of this work will have, but for now we can say that From Heaven He Came and Sought Her masterfully filled the lacuna observed by A. T. B. McGowan. In this century it will be the book that all others must consult as they consider the doctrine of definite atonement.