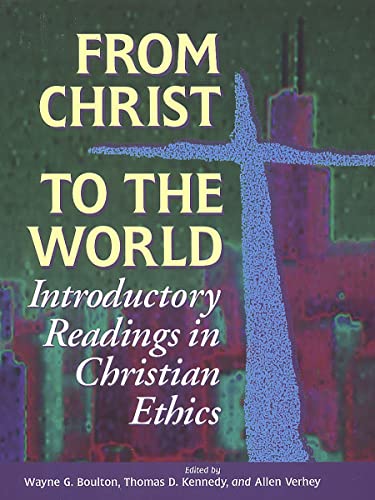 From Christ to the World: Introductory Readings in Christian Ethics

Those who teach courses in Christian ethics no longer need to require four to five books for an introductory course in order to cover the necessary topics. Editors Wayne G Boulton, Thomas D Kenndy, and Allen Verhey have provided the best collection of readings in Christian ethics available in English. Here in one place are classic readings from Augustine of Hippo, Thomas Aquinas, Aristotle, Martin Luther, Francis of Assisi, and John Calvin.

Intermixed with these classic voices are contemporary voices ranging from Walter Rauschenbusch to James Gustafson, from Margaret Farley to Stanley Hauerwas, Pope John Paul II to Reinhold Niebuhr to Carol Robb. Catholics, mainline Protestants, evangelicals, two Eastern Orthodox Christians, and even one Jewish political philosopher, are all represented. Feminists and traditionalists, pacifists and just war theorists, teleological, deontological, virtue, and narrative approaches, are placed in written conversation. Further, the quality of the excerpts is uniformly high, many of them precisely the essays one would want to have students read.

One could use From Christ to the World either as the main (or only) text in an introductory Christian ethics course, or as a supplementary reader. The former option is aided by an extensive introductory chapter by the editors, biblical excerpts, and ‘Try it Yourself’ case studies scattered throughout the book. In the latter use, the book would make a good supplementary text not only for introduction courses, but also courses in the history of Christian ethics, courses in various ethical topics or approaches, or even courses in the history of Christian thought. It is difficult to see how such a work could be improved. I recommend it enthusiastically.