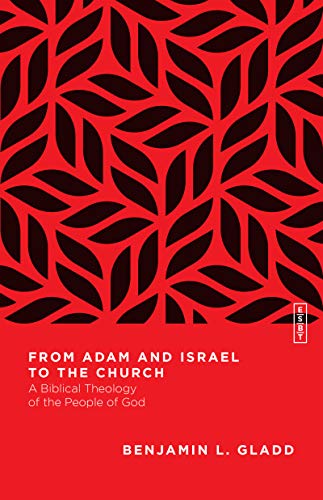 From Adam and Israel to the Church: A Biblical Theology of the People of God

With this book Ben Gladd, Associate Professor of New Testament at Reformed Theological Seminar in Jackson, Mississippi, puts in his debt those scholars who care about the church and believe that it needs more, rather than less theology. He offers a compelling biblical ecclesiology that is accessible without being shallow. His approach combines two story lines, one in the Reformed tradition that emphasizes the continuity between Adam, Israel and the Messiah Jesus, in which the last of these fulfills what the former two in turn left undone, and a more novel approach that weaves the traditional offices of the Messiah—King, Priest, and Prophet—into this narrative. Gladd starts with the creation and fall of Adam (chs. 1–2), shows how the story of Israel parallels this creation and fall (ch. 3), delineates the hope of Israel’s restoration in the “latter days” (ch. 4), demonstrates how Jesus fulfills this hope as Israel’s ultimate king, priest, and prophet (chs. 5–7), and finally articulates the church’s role as the new Israel that carries out these offices on Christ’s behalf (chs. 8–10). Reflections on “the Church in the New Creation” (ch. 11) and “Concluding Practical Reflections” (ch. 12) round out the volume.

The great strength of Gladd’s book is that it shows how Scripture tells a coherent story that grounds the Church’s identity and facilitates her understanding of her eschatological purpose, though I wish he had highlighted more clearly how this biblical narrative motivates her mission in the world. As they stand, the practical reflections seem more tacked on than educed from the theology, though this may simply reflect the fact that they are kept—consciously, I’m sure—very concise.

From a methodological standpoint, the book raises questions not only for Gladd but for all those who recently have begun propagating a robust temple theology. There is perhaps much to be gained from the insight that heaven serves as a template for the tabernacle/temple, but that does not mean that the reverse is true. The author of the Book of Jubilees virtually equated the one with the other, positing, for example, that purity laws were observed in Eden (Jub. 3:8–14), and Gladd seems susceptible to the same siren song. For my part, I find no basis in the text of Genesis 1–3 for his notion that there were three levels of holiness in Paradise, corresponding to the temple’s outer courts, holy place, and holy of holies. Rather, like the New Jerusalem in Revelation 21–22, there seems to be an inside, which is holy, and an outside, which isn’t. States of perfection have, it would seem, no need for postlapsarian gradations of temple purity.

I am not sure why they would require a prophetic office either. Gladd assigns one both to Adam and to believers in the final state, but there is no evidence for this in the relevant biblical texts, and it ignores a crucial element of the new covenant: “No longer shall they teach one another, or say to each other, ‘Know the Lord’, for they shall all know me, from the least of them to the greatest, says the Lord” (Jer 31:34 NRSV). Where perfect fellowship exists between God and human beings, there would seem to be little need for a prophetically mediated proclamation of God’s word.

Finally, I find Gladd’s exposition of image theology unconvincing. He often, though not exclusively, refers to Adam and Eve as “God’s image” (e.g., p. 12). On the other hand, he repeatedly speaks of Christ as being “in the image” of God (pp. 87–89). He is not alone in overlooking the fact that this turns biblical usage on its head. Neither Genesis 1:26–27 nor Genesis 5:1 nor Genesis 9:6 says that man “is” the image of God, but only that he is created “in” or “according to” God’s image. (Only 1 Cor 11:7 maintains that “the man is the image of God,” but that is in contrast to the woman; something else is going on there.) And Paul never says that Christ is “in” the image of God, but only that he “is” that image (2 Cor 4:4; Col 1:15). That is the reason I think Christian Stettler is right when he posits that the correct background for image Christology is not Genesis 1–2, but Ezekiel 1:28, which describes the Shekinah-Glory as God’s image (cf. Joel White, Der Brief des Paulus an die Kolosser, HTA [Wuppertal: Brockhaus, 2018], 118–20). Careful attention to the nuanced language of both Genesis and Paul would bolster Gladd’s conviction that “God fashioned the first Adam in the garden after the preincarnate Christ” (p. 88) and forestall the impression that he thinks the opposite is the case.

One can discern a common tendency behind the weaknesses I perceive in Gladd’s otherwise helpful study: a blurring of the distinction between template and derivative. In biblical theology at least, features of the former, which exhibit perfection, cannot be merely deduced from the latter, which do not. Postlapsarian realities such as Israel and the temple do not simply mirror life in the garden or the New Jerusalem. They are modified in important ways to point to the need for the redemptive work of Jesus, the true Messiah of Israel and the Son of God.