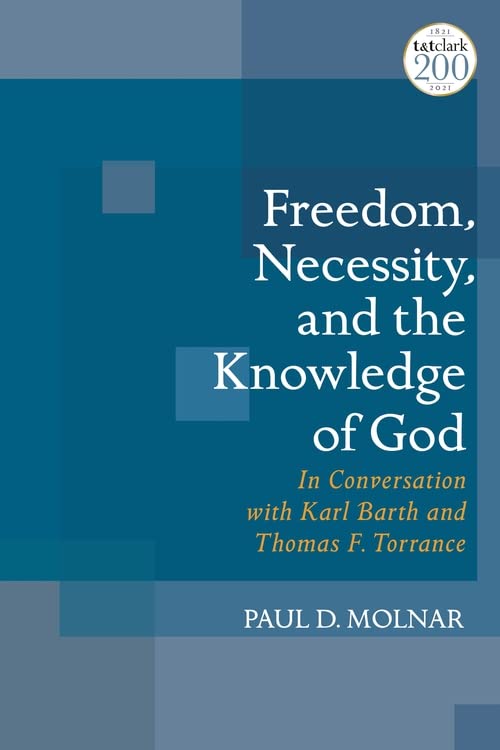 Freedom, Necessity, and the Knowledge of God: In Conversation with Karl Barth and Thomas F. Torrance

The offerings of modern theology are at the same time various and controversial. They are various in that the lines of inquiry are ever expanding as our world is becoming increasingly self-identified and self-orientated to its own pluralism. They are controversial in so far as modern theology has distanced itself from classic Christian theology, even, at times, repudiating its very essence. With this book, Paul Molnar, a Catholic theologian and professor of systematic theology of St. John’s University in New York, offers a foray into modern theology, placing it in conversation with the theology of Karl Barth and T. F. Torrance and demonstrating both the underlying similarities that exist between the various modern theological offerings and the tragic turn away from what is incontestably the heart of Christianity, namely, Christ.

The book is divided into eight chapters. Chapter 1 analyzes whether God’s act of creation is a necessary act. He gives special attention to Bruce McCormack’s formulation that God’s election for us constitutes the Trinity and provides a trenchant reading of Brandon Gallagher’s monograph Freedom and Necessity in Modern Trinitarian Theology (Oxford: Oxford University Press, 2016). Molnar argues that the fundamental problem with Gallagher’s work is that he “attempts to apply what he calls (F3), a third type of freedom to God” which “creates a situation in which one could conceptualize the relations between God and us as relations of mutual conditioning” (p. 34). Rightly, Molnar, with Barth and Torrance, rebuts Gallagher, arguing that God is not bound by any necessity to either create or redeemed sinners. Rather, his love is free and thus arising from spontaneously.

With the second chapter, Molnar places Barth in conversation with Roman Catholic theologians Karl Rahner, Walter Kasper, and Elizabeth Johnson. Here, Molnar is seeking to discern “whether or not the real problem dividing Roman Catholic and Reformed theologians is the analogia entis [analogy of being]” (p. 59). Intriguingly, he answers in the affirmative that despite the gains of post-Vatican II with its return to Scripture and Christ as center of theology, the analogia entis remains in Catholic theology. Rather, with Barth, Molnar asserts that Jesus must be “the first and final Word in theological and ethical reflection” (p. 60, emphasis original).

Chapter 3, on natural theology, explores the deficiencies of one of Molnar’s theological heroes: T. F. Torrance. Molnar concludes that while Torrance’s proposed “new” natural theology is unhelpful, it is ultimately, albeit inconsistently, dictated by his larger Christocentric theological convictions. Chapter 4 contrasts Karl Rahner’s and T. F. Torrance’s understanding of a non-conceptual knowledge of God, arguing that Torrance’s assertion that one only knows God “through God” (p. 158) shuts the door to the subjectivism that Rahner’s understanding of epistemology allows.

In the fifth chapter, Molnar focuses on Rosario Rodriguez’s defense of liberation theology. Molnar argues that, although “the struggle for liberation” is important, “Christ the Liberator” must be the starting point for the Christian faith in order to avoid “the danger of self-justification” (p. 164). Chapter 6 combats the tendency of feminist theology to revise language of God since traditional language promotes the maleness of God over against the feminine by arguing that “the revelation of God alone in his Son Jesus Christ” must inform our experiences, not the other way around.

Chapters 7 and 8 deal with universalism and pluralism, respectively. The former focuses on David Bentley Hart’s defense of universalism, arguing that by making it a theological necessity rather than a hope, Hart undermines God’s own freedom. The latter combats that notion that the three monotheistic faiths—Islam, Judaism, and Christianity—are in essence the same by clearly arguing that the Christian faith is not a bare monotheism but a triune one. Helpfully, Molnar suggests that what unites these three faiths is not monotheism but rather their invitation of the adherents of each to believe the gospel of Jesus Christ.

Molnar’s treatment of modern theology uncovers a unifying thread: a bent toward experience and the subject and therefore a rejection of the centrality of Christ and the triunity of God. As such, his work is a welcome contribution to and engagement with modern theology as Molnar, with force and conviction, pulls the reader back to the revelation of God the Father in his Son through the Holy Spirit.

For those less acquainted with Barth and T. F. Torrance, Molnar demonstrates how their insights reflect a broader Reformed emphasis in solus Christus (not the mention the other four solas) and as such, in the hands of Molnar, they provide a model for how orthodox Protestantism ought to engage with the theological deficiencies of our time. Students and scholars of classic Reformed theology will not agree with all his conclusions, such as his assertion, with T. F. Torrance, that so-called “limited atonement” is a Latin heresy. Some readers may find Molnar repetitive at points and grow apprehensive of the long footnotes that permeate the book. Nevertheless, Molnar’s deep engagement with modern theology as well as the theology of T. F. Torrance and Barth, combined with clear writing and conviction, makes this a worthwhile read for anyone interested in modern theology and the corrective thereof offered by a capable theologian.