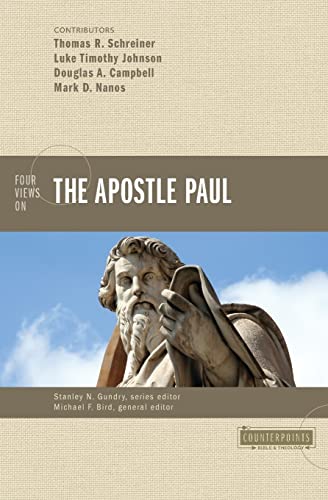 Many readers are already familiar with previous volumes in Zondervan’s Counterpoints series. The idea is to invite several respected scholars who hold different positions on a challenging topic to present their views and interact with each other’s essays. In this latest entry, the challenging topic is the Apostle Paul.

Michael F. Bird serves capably as the editor of the volume. His own views on Paul can be found in several publications, including The Saving Righteousness of God: Studies on Paul, Justification, and the New Perspective (Paternoster, 2007) and Introducing Paul: The Man, His Mission, His Message (IVP, 2009). His introduction summarizes the credentials and views of each contributor to prepare the reader for their respective essays. Even more significantly, Bird highlights the four key areas each essay is supposed to address: (1) Paul’s understanding of salvation; (2) the significance of Christ; (3) the best framework for describing Paul’s theological perspective; and (4) Paul’s vision for the churches. His concluding chapter helpfully synthesizes areas of agreement between the contributors as well as points of disagreement.

The four contributors are well-selected. Thomas R. Schreiner presents a “Reformed Reading” of Paul. He is well-known for his commentaries on Romans (Baker Exegetical, 1998) and Galatians (Zondervan Exegetical, 2010), but also for Paul, Apostle of God’s Glory in Christ: A Pauline Theology (Baker, 2006). Luke Timothy Johnson argues for a “Catholic Perspective” on Paul. He is the author of the widely used The Writings of the New Testament (3rd ed.; Fortress, 2010) as well as commentaries on the Pastorals (Letters to Paul’s Delegates, 1996), 1–2 Timothy (Anchor Bible; 2001) and Romans (Reading the New Testament; 2013). Douglas A. Campbell offers a “Post-New Perspective Account” of Paul. He has authored two major works on Paul: The Quest for Paul’s Gospel: A Suggested Strategy (T&T Clark, 2005) and most recently The Deliverance of God: An Apocalyptic Rereading of Justification in Paul (Eerdmans, 2009). Mark D. Nanos provides a “Jewish View” of Paul. In addition to a number of essays on aspects of Paul’s thought, Nanos has produced two significant volumes: The Mystery of Romans: The Jewish Context of Paul’s Letter (Fortress, 1996) and The Irony of Galatians: Paul’s Letter in First-Century Context (Fortress, 2002).

Since the primary value of these sorts of books is introducing readers to a challenging topic and key viewpoints on that subject, this book accomplishes its main objective. Asking the contributors to address the four key areas helpfully attempts to focus each essay, though some contributors are better at “playing by the rules” than others. Furthermore, the responses to each chapter allow the reader to see weak points in the argument they otherwise might have missed.

For those who are already familiar with some of the different views on the Apostle Paul, this book provides reasonably short summaries of what each contributor has argued for at length elsewhere. This is especially true for the contributions by Campbell and Nanos. Since Campbell’s 1,200+ page tome The Deliverance of God will prove too lengthy for most outside of the academy (and many inside it!), having a 30-page overview will benefit many readers. [Editor’s note: see Mark Seifrid’s review of Nanos’s The Deliverance of God in Themelios 35:2 (July 2010): 307–9.] Similarly, many readers will likely be unfamiliar with Nanos’s unique Jewish perspective on Paul, so his contribution will introduce them to the broader spectrum of academic approaches to Paul.

Overall, the interaction between the contributors is both respectful towards each other and helpful to the reader. Schreiner stands out as especially gracious in his interaction with the other contributors, taking great pains to note areas of agreement before noting his points of disagreement. Unfortunately, Nanos does not extend the same courtesy to Schreiner. Rather than focus on Schreiner’s essay, Nanos devotes more than half of his response to comments Schreiner makes in his Galatians commentary regarding Nanos’s views. Not only is this likely to confuse the reader, but it comes across as an attempt to “settle the score” with Schreiner. There is certainly room for sharp disagreement—as demonstrated at several points in the responses—but grinding axes does not serve the reader well.

For the reader looking for some of the key interpretive approaches to the Apostle Paul, this book will be a valuable, albeit slightly incomplete, resource. Those most likely to benefit from it are seminary students being introduced to the academic study of Paul, as well as pastors who feel the need to understand some of the more recent trends in Pauline studies.