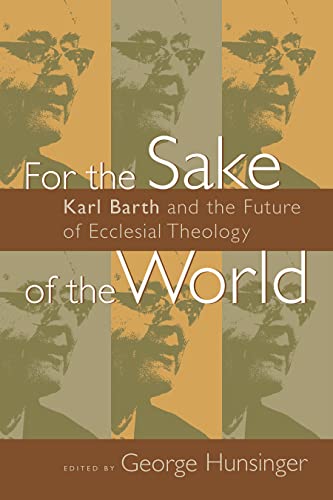 FOR THE SAKE OF THE WORLD, KARL BARTH AND THE FUTURE OF ECCLESIAL THEOLOGY

This book brings together the papers and responses from the 1999 conference which inaugurated the Centre for Barth Studies at Princeton University Conference collections can often prove a little hit and miss or lack coherence and focus, yet this volume from some of Barth’s most astute observers holds up well under such charges. The six papers all make some attempt to address the conference theme as set out in me subtitle and to remind us of Barth’s relevance and vitality in contemporary theology. Responses clarify the insights of contributors and source for us some gems from Barth’s voluminous work. The six papers cover the Barth-Brunner correspondence; Barth’s position on the Jew during the Hitler era; Barth and the politics of the new world order (which in paying more attention to the latter than the former seems the odd one out); his doctrine of providence; Barth’s thought on love and Christian ethics; and the relationship between God and time/eternity in Barth. An index and summary page outlining the positions held or the further work of the contributors would have been a helpful addition for the reader and whilst some papers are less accessible than others (Hunsinger’s resolution of the time versus timelessness puzzle in theology intriguingly involves seeing God’s eternity as ‘a subtopic in the mystery of the Trinity’), they remain instructive and broad ranging in their scope.

Unable to do justice to each paper, let me sell you the book on the strength of its epilogue and two of its six papers. In the first, John W. Hart summarises his Oxford PhD on the Barth-Brunner correspondence from 1916–1936. A better one chapter synopsis of the history of the Barth-Brunner debate and why it represents a fork in the road of modern theology, one could hardly hope to find. Significantly, he sees the correspondence as offering further evidence for the view that there is ‘continuity’ as opposed to a ‘staged’ theological development in Barth’s thought. The dispute which culminated in the infamous ‘Nein!’ article of 1934 is of course over the point of connection between God and man, (namely the law). For Brunner this makes room for theology’s other task—eristics—a polemical engagement with human reason which both challenges the false philosophical assumptions in secular thought and pursues an existential theology over against an objectivist dogmatics within the church. In Barth, Brunner sees a watchdog who, instead of barking at everything but the owner of the house (in a critical ‘no’), barks at everything in principle (a dialectic ‘no’). For his part, Barth’s theology, ‘like a spinning top, supports itself on only one point’. (i.e., the absolute freedom of God in his revelation received by faith within the covenant community of the church and not, however alien to the modern mind, through reason, history, psychology, or philosophy).

The letters also reveal a more pastoral side to Barth. On 3rd July, Brunner admits in a letter to his theological elder brother, ‘I still have the feeling—and my moral experiences confirm it—that I have still not penetrated to God, that my faith has produced nothing.’ Responding immediately, Barth quotes Luke 24:5, ‘Why do you seek the living among the dead?’ urging him to mistrust the ‘unavoidable variations of the inner life’, and instead of turning back in on himself, to stretch out to an ‘objective hold on God as God’. When the subjectivity of religious experience narrows in, ‘I cut off these thoughts the moment I notice the trap being laid’, writes Barth, ‘then I wait until joyfulness, faith, enthusiasm, etc. returns (sometimes they don’t return for a long time)’.

John Webster comments astutely in his response to Caroline J. Simpson’s fifth paper (interestingly a philosopher of religion, a breed who (according to Webster) sees Barth as a joke in several volumes and hates him without having read him). She offers a comparison between love expressed in the theology of Barth and in the practical witness of the French Reformed community of the village of Le Chambon which used its network of farmhouses to shelter Jewish refugees. Far from advocating a sectarian and insular view of neighbourly love, Webster argues that Barth points the church to the source of boundless love—God in Jesus Christ, present in the Spirit. This observation chimes with Barth’s reply to an astronomer who told him after a sermon he’d preached, that ‘the whole of Christianity can be summed up by saying ‘Do unto others as you would have them do unto you’.—‘Well, I am just a humble theologian, and as far as I’m concerned, the whole of astronomy can be summed up by saying “Twinkle twinkle, little star, how I wonder what you are”.’

With the Barth-Brunner correspondence (published in German in 2000), and Barth’s complete works reaching a wider readership in paperback, a new generation of theologians is likely to be reminded of how worthwhile Barth himself is to read. If only for the quotes and anecdotes in the twelve-page epilogue on Barth as a Teacher by John D. Godsey (an American student of Barth from 1953 to 1956), this volume is worth tracking down. Two stories will suffice to whet your appetite. First, the truth behind Barth’s role in the Barmen declaration. After its six points had been outlined by Barth, Thomas Breit, and Hans Asmunssen one May morning in 1934 (the three appointed by the Lutheran, Reformed, and United churches), it was agreed to reconvene after lunch at 5 o’clock to compare full drafts. Having enjoyed a hefty lunch followed by coffee, liqueurs and cigars, good intentions of an afternoon’s work fell prey to the customary German nap. For his part Barth, who ordered more coffee to be sent to his room, drafted all but is words of the document that condemned the Nazification of the church in Germany. As he reflected ‘Church history is probably full of queer moments like this!’ Second, the account of Paul Tillich’s visit to Barth on his way through Basel from a visit to the church of the nativity in Bethelehem. The words on the star in the crypt of the church read ‘Hic verbum Dei caro factum est’, ‘Here the Word of God was made flesh’. ‘You know Karl’, said Tillich of the inscription, ‘that sums up the whole of my theology—except for that ‘hic’!)’. ‘All, Paul’, Barth replied, ‘that “hic” sums up the whole difference between your theology and mine.’