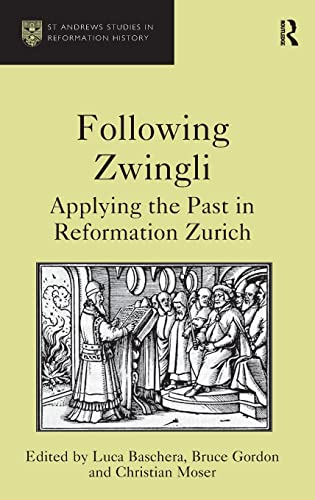 Following Zwingli: Applying the Past in Reformation Zurich

What does the past have to say about the present? This question drives Following Zwingli, which explores the long shadow cast by renaissance humanism on reformation Zürich in the years following Huldrych Zwingli’s death in 1531. One of the newest offerings from Ashgate’s St. Andrews Studies in Reformation History series, Following Zwingli draws on the expertise of Swiss reformation specialists Luca Baschera, Bruce Gordon, and Christian Moser as they consider “how a radically new form of Christian community was created in the sixteenth century and how various models were employed to form patterns of learning, piety, and behavior” (p. 10).

Focusing primarily on the ministerial career of Zwingli’s successor, Heinrich Bullinger, the editors of Following Zwingli have compiled essays that consider how memoria, emulatio, imitatio, and applicatio helped to inform and shape the developing model of church and society in Zürich during the early modern period. As each of the essays demonstrate, appropriating beliefs and models found in the sources of antiquity did not mean an uncritical, mechanical or verbatim reaffirmation of certain truth claims from a time gone by. Instead, the greater concern was to convey transcendent truths rooted in the past, but in a stylistically engendered way that spoke to the contemporary context of reformation Zürich. Thus, Following Zwingli demonstrates how the concluding portrait of a transformed Zürich unveiled at the close of the 16th century was the by-product of a commitment to such a pedagogy. The unique implementation of models and concepts from the past as a means of forming certain thoughts and directing behavior served as the brushstrokes of influence cast upon a Zürich canvass already painted on by Zwingli.

This link to the past as a means of reshaping the community of Zürich serves as the thread of continuity binding the essays in Following Zwingli together. Apart from the first chapter, which was co-authored by the book’s editors and helpfully frames Zwingli’s own place in this narrative, the remaining ten chapters offer specific case studies that speak to how ideas from the past helped to shape the course of certain aspects of Zürich’s society. It is here that the book may face some criticism, for several of the chapters bear little to no link to the work of Zwingli. Thus, if one comes to Following Zwingli looking for strong Zwinglian impressions on the Swiss Confederate State, then this book will fall short of expectation. Even the strong influence of Martin Bucer on the Zürich church following Zwingli’s death, an important discovery highlighted by Amy Nelson Burnett (“The Myth of the Swiss Lutherans: Martin Bucer and the Eucharistic Controversy in Bern,” Zwingliana 32 [2005]: 45–70), is left without mention. However, this weakness is a tradeoff for one of the book’s strengths—the breadth of its scope. Expanding beyond Zwingli’s reach and the typical ecclesiastical influences, Following Zwingli explores a sweeping and diverse range of sources that not only spoke to the changes in the Swiss Church, but also to the Zürich community at the dawn of the early modern era.

As might be expected, many of the sources that served to transform Zürich came from the biblical text. For instance, a chapter by Jon Wood, highlighting Bullinger’s use of the motifs of Old Testament prophet and priesthood, reveals how biblical office patterns could be parlayed into an argument for Zürich’s restructured episcopacy. Similarly, a chapter by Moser winsomely demonstrates how “the book of Ruth was especially well suited to help propagate a distinct Christian morality for the citizenry … a cause championed by the reformers of Zurich” (p. 122). Even something as volatile as the historic place of Jesus’s mother, Mary, could be employed as an exemplar of both proper female culture (p. 138) and true faith for the community at large (p. 173).

Outside Scripture, other sources spoke with similarly strong voices to the city’s culture. Drinking from the fount of Patristic sources, Mark Taplin reveals in chapter 2 how Josias Simler utilized the consensus patrum (singular voice of the fathers) to not only address contemporary heresies promoted by radicals like Kaspar Schwenckfeld, but also to rebut the charges of Nestorianism that lingered from Zwingli’s debate with Luther at Marburg. Even overtly pagan sources, like Aristotle’s writings and the oft-censured Roman poet Matial’s Epigrams, could be redeemed as a means of realizing an elevated level of morality and learning in the Zürich community. And, as demonstrated by chapters 10 and 11, sourcing should not be exclusively framed in terms of the ancient. In those two concluding chapters Matthew McLean and Bruce Gordon reveal how the lives of those just one generation removed from an earlier context were effectively able to convey that learning was to be “used and shared rather than owned” (p. 252); culture-shaping truth could even be passed down from father to son.

Overall, Following Zwingli is a compelling read that invites its audience to return to the very sources that once spoke to and ultimately reshaped Zürich following the city’s formal reformation in 1525. The chapters are thoroughly sourced and well written. The book is pitched to an academically and historically astute audience, thus the language is often technical and assumes a high level of familiarity with the history of the Swiss reformation. But for those interested in the transmission of ideas during the early modern period, Following Zwingli opens the reader up to a tumultuous and fragmented Zürich during the 16th century; a community replete with no shortage of convictions left for subsequent generations to consider in their own contemporary world.