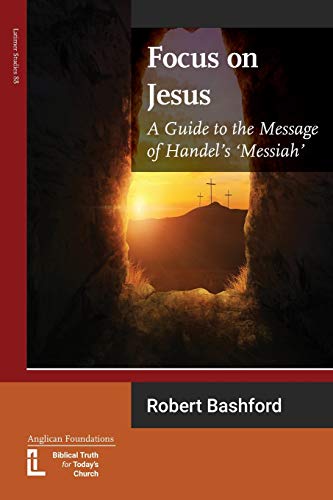 Focus on Jesus: A Guide to the Message of Handel’s Messiah

COVID has been difficult for choirs worldwide. During the past 20 months, my own choir—the oldest in Australia—has only come together as a whole for just six weeks. However, that short window of resumption, earlier in 2021, coincided with Easter, and with it our annual performance of Handel’s Messiah. 2020’s performance had been canceled just two weeks prior to Easter, so this Messiah was eagerly anticipated by choir, orchestra and audience alike.

However, the choristers all seemed to have forgotten it, or had never sung it before, so teaching Messiah’s choruses in the space of a month to seventeen boys brought home again to me the extraordinary fusion of biblical text to music that is Messiah’s genius. For once heard, even by those for whom it is new, those scriptural passages can’t be read again without hearing Handel’s music. Messiah makes the text come alive (even for 9-year-old children!) and lodges it in the heart forever.

For those wishing to better understand this phenomenon, retired English clergyman and musical enthusiast, Robert Bashford, has written a delightful book: Focus on Jesus: A Guide to the Message of Handel’s Messiah, contributing a valuable addition to the literature on this masterpiece of sacred music.

In his introduction, Bashford helpfully outlines the aims of the book: to comment on the libretto’s biblical text in order to explain its meaning within Messiah, and also (here a departure from predecessors in the literature) within its original biblical context. He does this most thoroughly, line-by-line, in good expository fashion in the manner of a sermon—complete with illustrations (mainly from C. S. Lewis) and often application. Handel’s music is discussed separately in a brief, conversational way at the end of each section.

Bashford’s style is warm and homely: one can hear his pastoral teaching tone coming out as he explains the nuances of the text to us, his expectant congregation. In this sermon-style, Bashford is in esteemed company, as John Newton delivered fifty sermons based on the Messiah Scriptures, inspired by the Handel centenary in Westminster Abbey in 1784. Newton declared that listening to Messiah was “one of the highest and noblest gratifications this life is capable of.”

Although Handel is the name associated with the oratorio, the text selection is in fact entirely the work of Charles Jennens, Handel’s librettist, and it is to him that we owe the entire subject matter. Bashford rightly gives him the respect he deserves.

Having previously selected the libretto for two of Handel’s oratorios, Israel in Egypt and Saul, Jennens, at his own instigation and gratis, Jennens presented Handel with the new libretto, prefaced with a quotation from Virgil’s fourth Eclogue, “Majora Canamus”: “Let us sing of greater things.” And of what greater things could there be than the King of Kings and Lord of Lords? “I hope he will lay out his whole Genius & Skill upon it, that the Composition may excell all his former Compositions, as the Subject excells every other Subject,” wrote Jennens to his friend, Holdsworth.

Charles Jennens was a man of some considerable wealth and no little scholarship. He was a devout Anglican, a supporter of the SPCK, actively anti-Deist and, despite being a Nonjuror (and therefore unable to graduate from Oxford), became a noted Shakespearian scholar later in life. A loner, he remained single and was prone to depression, later inheriting his father’s large country estate, “Gospall,” where he entertained Handel. His contribution to Messiah cannot be overestimated: Handel himself wrote to him referring to “your oratorio Messiah.”

As a librettist choosing texts for the subject of the Messiah, it is at first glance odd that the biblical material is taken almost entirely from the Old Testament. There is no real narrative, apart from the brief Nativity scene when Jennens takes a short excursion to Luke’s Gospel. There is no account, for example, of the crucifixion or resurrection, which, considering their centrality to Christian belief, is still surprising. And although Jennens does address the death of Jesus through Isaiah 53:8, when set by Handel on most of the modern recordings, this lasts a cursory fifteeen seconds at most!

Handel scholar Donald Burrows once remarked that Jennens’s oblique way of pointing to Jesus was “incomprehensible to an audience without a prior knowledge of the subject: the listener must be, if not necessarily a believer, at least well-versed in the scriptural accounts of events between Maundy Thursday and Whit Sunday, and know something of their conventional theological interpretation” (Handel: Messiah [Cambridge: Cambridge University Press, 1991], 58). The early music scholar Clifford Bartlett went even further, finding the selection of prophetic texts was actually advantageous to the “non-believing performer and listener [who] may find it easier to ignore the Christian message than when encountering Bach’s Passions, for example” (“Introduction,” in Messiah: Full Score, ed. C. Bartlett [Oxford: Oxford University Press, 1998], v).

This explains why performing Messiah, as a form of gospel outreach, is not nearly so effective as might first be thought. At the very least, one has to work much harder to find the overarching message, particularly in a Scripturally-ignorant generation.

But this is why Bashford’s book is so helpful and encouraging. For what he carefully and patiently shows is that the assembled text does have a plan to reveal the Messiah, prophecy by prophecy. There are several, very clear explanations of the foundational Christian doctrines, including a particularly good explanation of the various passages from Isaiah 53.

Some of Jennens’s selection can be explained by his fondness for Bishop Richard Kidder’s Demonstration of the Messias, in which the Truth of the Christian Religion Is Proved, 2nd ed. (1726). Jennens uses more than half of the verses cited by Kidder. This was also a key text in the anti-Deist movement. Some have even argued that Jennens wished to marshal Handel’s oratorio in his battle against the anti-revelatory/mystery aspect of Deism, so prevalent in both men’s milieu. This tome, and the then-popular A Paraphrase and Annotations upon All of the Books of the New Testament by Henry Hammond (1653) explain many of the idiosyncrasies in Jennens’s text (e.g., his use of textual variants in the Authorised Version) and therefore answers some of Bashford’s questions about his choices.

The musical analysis is the weakest part of Bashford’s book. For example, even an amateur musician would raise an eyebrow at “How Beautiful Are the Feet” being described as “a particularly engaging item—one to be enjoyed for its lovely tune” (p. 120). This is a pity considering the excellence of his textural analysis and explanation. So much of Messiah is a musical exposition of the text, for instance the sheer contrapuntal happiness that Handel employs to depict the sweet folly of sin in “All we like sheep have gone astray, we have turned ev’ry one to his own way,” leading inexorably to the tormented piling up of homophony in the words “but the Lord hath laid on him the iniquity of us all.” The contrast is intended to be painful.

These weaknesses notwithstanding, Robert Bashford has written a beautifully heart-warming and Christ-centred book, and—COVID permitting—when I raise the baton next year to conduct Messiah for the twentieth time, I will be able to do so much more aware of the wonderfully assembled texts which inspire singers, listeners, players and reader to kneel and worship the Lamb that was slain.