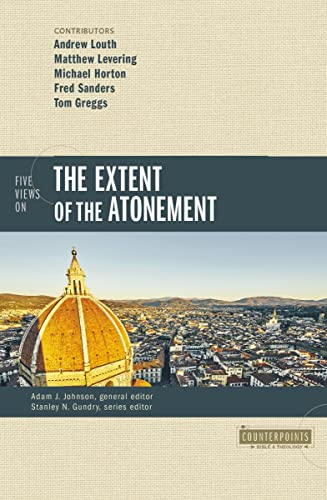 Five Views on the Extent of the Atonement

Answering the question “for whom did Christ die?” is no simple task. Adam J. Johnson, associate professor of theology in the Torrey Honors Institute at Biola University and author of Atonement: A Guide for the Perplexed (London: Bloomsbury T&T Clark, 2015), looks to provide a volume that presents responses to this question using an ecumenical approach. He does this by offering not only a chapter on the common Reformed and Wesleyan traditions, but also by dedicating a chapter to the Eastern Orthodox, Roman Catholic, and Christian Universalist views as well. In offering an introductory chapter which voices some of the different areas that are involved in this encompassing doctrine, Johnson paves the way for the presenting of these five different views on the extent of the atonement. True to the Counterpoint series, each view is given a chapter followed by responses from the four other authors.

First, Andrew Louth presents the Eastern Orthodox view. Louth claims that the idea of a forensic notion of atonement is far more prevalent in the Western theological tradition than it is in the East; therefore, the concept of the extent of the atonement in the East “hardly gets off the ground” (p. 32). To comment on the topic nonetheless, Louth mentions that it would be far better to speak of God’s redeeming love as unlimited than it would be to limit it, and that the purpose of such redemption is “to facilitate God’s original and eternal purpose for his created order, to draw it into union with himself, to deify it” (p. 36).

In the second chapter, Matthew Levering argues for the Roman Catholic view. After surveying the Catholic magisterial teaching and the influence of Augustine and Aquinas, Levering gives an account of his own position based on the biblical texts and the writing of Francis de Sales. In the end, Levering discerns a tension in the biblical teaching of God’s love. On the one hand, God efficaciously predestines some to salvation and permits others to remain in rebellion; on the other hand, God superabundantly loves each and every rational creature. Rather than subordinating one view over the other, Levering holds both sides in tension, concluding that Christ died “for the salvation of each and every human,” thus allowing that Christ “died for some whom he knew would reject him” (p. 89).

The third chapter, written by Michael Horton, presents the traditional Reformed view. He first clarifies some common misconceptions about Calvin and Calvinism before then discussing the importance of the Trinity for understanding God’s purpose in redemption. Horton provides ample biblical support for his view and argues that the Reformed understanding of the extent of the atonement is connected with its substitutionary nature. Horton then mentions three different answers concerning the purpose of Christ’s death, the first being Universalism, the second being Hypothetical Universalism or Amyraldianism, and the third being the one he argues for, which, in reference to the Canons of Dort, claims that Christ’s death is sufficient for all but is intended for the elect alone. Horton then responds to three objections to this view before closing his chapter.

The fourth chapter by Fred Sanders is dedicated to the Wesleyan view. Sanders view is heavily based on the doctrine of the Trinity, focusing on “the difference between nature and person, the difference between salvation accomplished and applied, and the difference between the Son and the Holy Spirit” (p. 158). Through the discussion of these three topics, Sanders argues that salvation is accomplished by the Son and applied by the Holy Spirit. Therefore, the atonement is sufficient for all and intended for all, but it is effectively applied only to those who respond to Christ in faith. The tension of God not getting what he intends as some remain unreconciled to him is held to be a mystery “that resists final systematic solution” (p. 171).

Johnson concludes the book by exhorting the reader to be patient in the working out of this doctrine, offers questions to be explored, and gives a call for further ecumenical discussion.

Overall, this book fulfills its purpose in giving a voice to those within traditions that are often neglected in this discussion, even though the views of the authors cannot be said to be representative of every person within that given tradition. Further, different aspects of certain chapters offer helpful studies, such as Levering’s analysis of Augustine’s and Aquinas’s views on this topic. The different responses to the chapters are also at times helpful, although sometimes overly predictable.

Regardless, this volume remains a worthy contribution in offering an ecumenical discussion on the atonement. It is a helpful introduction to the field and will hopefully serve to encourage the reader to explore this topic more fully.