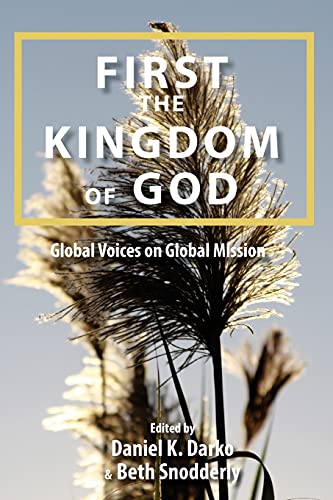 First the Kingdom of God: Global Voices on Global Mission

First the Kingdom of God provides a theological and practical assessment of the church’s mission in the world. The editors put together an ambitious anthology. An impressive group of scholars across academic disciplines apply the gospel to a range of contemporary problems confronting the global church. In the process, they raise a number of practical questions. For instance, if the gospel and the church transcend any one context (e.g., Western culture), how might this fact shape our approach to ministry? Likewise, how does the church prioritize its mission in a world marked by globalization, ethnocentrism, and political instability?

The book integrates good theology and sound missiology. Peter Kuzmič (to whom this book is dedicated) and Timothy Tennent set the tone in the opening section. Kuzmič frames the discussion by arguing that the church fulfills its mission by being people who recognize and reflect the kingdom of God, which Kuzmič understands to be the reign of Christ in the world. According to Tennent, the church has become globalized; thus, it is now easier for people to see that the gospel is not a “theologically provincial” message whereby the “West reaches the Rest” (pp. 58–59). In short, the church’s mission reflects the fact that Christ is king over all nations and cultures.

In the second and largest section of the book, a number of authors demonstrate the practical importance of “mutual interdependence in how Christians work together” in God’s mission (p. 6). Mirsolav Volf’s article is a highlight of the book. He examines Peter’s exhortation to “honor everyone” (1 Pet 2:17, ESV). He argues compellingly that genuine respect and tolerance for others requires forms of non-acceptance, disapproval, and is based on monotheism. Next, Darko’s study of Paul’s mission urges cooperation in the face of social barriers and ethnocentrism, which Ruth Padilla DeBorst says undermine loyalty to Christ.

The chapters by Hwa Yung, Bruce Nicholls, and Gregory Mundis focus on the relationship between Christianity and culture. People should have “a clear sense of our own indigenous Christian identity” (p. 124). At the same time, the gospel calls into question any number of cultural presuppositions. Each essay addresses questions about contextualization. Although they contribute meaningfully to their respective topics, it is a bit difficult to see exactly how they fit within the larger framework of the book. This is likely due to the fact that most of the book’s essays were “taken from a multi-lingua Festschrift” for Peter Kuzmič (p. 2).

Section three attempts to show what Christian mission looks like in various social settings. Corneliu Constantineanu’s excellent essay unites the sacred and secular by linking justification and ethics. He claims, “by ‘righteousness’ Paul does not understand simply a vertical, legal transaction between God and people, but rather a process which necessarily involves a moral transformation in the lives of the believers” (pp. 182–83). Barry Corey examines the founding of Evangel College to show how a Christian subculture utilizes institutionalization as a means of survival. Finally, C. René Padilla argues that western culture leads some to regard theology as “datum” such that some, like the poor in Latin America, do not see the relevance of this uncontextualized message. Thus, a contextualized church requires a contextualized gospel (pp. 220–21).

The book’s final section offers a timely challenge to the church. Scott Hafemann’s exegesis of 1–2 Thessalonians suggests that eschatology drives ethics. Genuine conversion is a “continuing conversion” such that a vision for God’s future rectification of the world sustains Christian perseverance (pp. 232–33). Christopher Wright uses Gen 18:18–19 to demonstrate the ethical content of the Abrahamic covenant and thus God’s mission to the nations—the ethical distinctiveness of God’s people testifies to the uniqueness of Israel’s God. Finally, Ronald Sider’s multifaceted argument asserts that evangelicals tend to overlook “structural” injustice because they reduce the gospel primarily to “forgiveness” for individuals at the expense of communities. He suggests a few practical ways to redress the problem.

Darko and Snodderly give us a balanced presentation. The exegetical essays provide a strong biblical foundation for understanding the Church’s mission. In addition, the contributors avoid giving abstract presentations to very concrete concerns. Whether one is more of an academic or a practitioner, he or she will benefit from the book’s fair-minded approach. When offering criticism, the authors are constructive. Since the authors come from diverse perspectives, readers will not be able to dismiss quickly the book’s arguments due to some perceived bias. These are not simply non-Westerners writing to “Western” churches. They apply theological acumen while drawing from their own experiences. In short, the editors recontextualize the debate, highlighting the global nature of the conversation of the church’s mission.

Despite its obvious strengths, a few aspects of the book will detract from the editors’ overall aim. First of all, readers might judge some chapters out of place within the book’s overall framework. For instance, Nicholls, Mundis, and Corey do a fine job addressing their respective topics; yet, it is difficult to discern a central thesis that would bind them to the other chapters. Second, although the authors write for evangelical readers, a number of essays repeatedly focus on ministry being done by Pentecostal Christians. This could put off some readers by giving the wrong impression that the discussion is aimed for that more focused Pentecostal audience. Finally, I wish to point out that the description on the back cover does not clearly communicate what the book is about. As a result, some potential readers will bypass an otherwise constructive and recommended read.