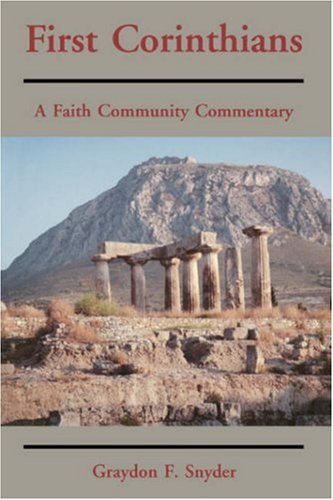 The subtitle of this work—A Faith Community Commentary—describes the author’s understanding of both the original purpose of 1 Corinthians as well as its relevance for the modern church. A faith community consists of a group (body) of individuals organized around a common faith commitment to Christ. In a faith community, the community (the whole people of God) is not defined by the individuals, but the individuals by the community. In Corinth, the faith community had become divided by those who placed their own individualized ideology over the unity of the church. Paul sought to convince the Corinthians that the whole body of Christ is more important than the preservation of individual convictions. Graydon F. Snyder offers a readable commentary of 1 Corinthians based on this overall understanding. Moreover, he exposes the relevance of such a reading for the modern church, where individuality is often prized at the expense of community.

This commentary is structured usefully: a brief introduction; outline; commentary (including an introduction to the thematic unit, preview of the argument, explanatory notes, a discussion of the thematic unit in its biblical context and suggestions for its use in the modern church); and, finally, essays on key concepts in 1 Corinthians. A less useful bibliography (too limited) and topical index conclude the commentary.

Introductory issues are touched upon briefly. Snyder’s knowledge of cultural and archaeological sources is invaluable not only here but throughout the work. But the most important issue treated in the introduction is the composition of 1 and 2 Corinthians. According to Snyder, Paul first wrote 1 Corinthians 7–16 (a response to a letter from Corinth), then 1 Corinthians 1–6 (a response to news from Chloe’s people), then 2 Corinthians 10–13 (an angry letter resulting from his second visit to Corinth), and finally 2 Corinthians 1:1–6:13 and 7:2–9:15 comprise Ms final, yet joyful, letter. This understanding determines the structure of the commentary. 1 Corinthians 1–6 is treated separately from 1 Corinthians 7–16 as a distinct piece of correspondence. However, no explanation is given as to why both were later combined into one letter, nor does Snyder state whether the epistolary framework was part of the original letters (and which one) or whether it was added later. In these first six chapters (tire second of Paul’s two letters), Paul must diffuse a potentially fatal problem at Corinth. Four groups claim unique possession of true Christianity, three naming themselves after Christian leaders (Peter, Paul and Apollos), the fourth claiming to follow only Christ (the Christ house church). The Christ house church, whom Snyder unfortunately labels ‘gnostics’, is the main culprit of the Corinthian divisiveness. In chapters 1–4 Paul introduces the problem of divisive groups (1:10–17), contrasts them with the foolishness of the cross (1:18–2:5), the mind of Christ (2:6–16), the true function of leadership (3:1–23), and the need to be fools for Christ (4:1–21). In chapters 5–6, Paul presents two case studies at Corinth (5:1–13, the spiritual arrogance of the Christ house church; 6:1–11, the failure of some to leave behind the old age exemplified in their judicial practices) to bolster his argument in 1 Corinthians 1–4. He concludes with the metaphor of the body of Christ as an exhortation to unity.

The second major section of Snyder’s commentary deals with 1 Corinthians 7–16, Paul’s first letter to the Corinthians. The structure of this letter is organized around questions brought to Paul from Chloe’s ambassadors. These questions are signalled by the phrase peri de (concerning the matter of …) and are fourfold (7:1, persons already married; 7:26, single persons and marriage; 8:1, 4, meat offered to idols; and 12:1, spiritual gifts). Two other questions are addressed at the close of the letter: 16:1 (concerning the collection for Jerusalem) and 16:12 (concerning Apollos). According to Snyder, Paul deals with almost all of these questions, despite their disparity, by appealing to the overriding value of the faith community (i.e. the body of Christ).

This commentary is commendable in view of its continual treatment of individual passages in light of the surrounding argument. In addition, Paul’s theology and personal history are used (albeit cautiously) to understand the letter. For example, Paul’s apocalyptic theology is used to explain Paul’s appeal to the old, the new, and the not-yet history of Christians. Indeed, Snyder argues that many of the Corinthians’ problems (e.g.denial of a resurrected body) arose from a misunderstanding of Paul’s apocalypticism. Finally, Snyder may be commended for demonstrating the relevance of Paul for the modern church, especially urban churches where communities can be dissolved in the rush of humanity. Snyder is unabashedly critical not only of Paul’s era, but of ours.

Certain criticisms, nevertheless, may be mentioned. Despite Snyder’s attempt to produce a reading of 1 Corinthians based on his own faith community (the Radical Reformation churches), this reviewer was frequently annoyed by the failure to present other interpretations of the text—something he might call the ‘academic exegesis of Western Christianity’. In addition, Snyder’s assumptions regarding critical NT problems are frequently stated as if there were no alternatives (e.g. Pauline authorship of every NT letter bearing his name; historical reliability of Acts; combined letters; justification by faith as the central theme of Paul; the corporate personality of Judaism). Whether it be Black Theology, feminist interpretation or the ambiguous ‘Western exegesis’, all faith communities are responsible to dialogue with one another and present all alternative readings to their followers. The failure to do so may simply result in faith communities ignorant of the legitimate concerns of other faith communities. This criticism is not directed at Snyder’s overall interpretation of 1 Corinthians, which is often quite convincing, but at his failure to inform tire general reader (for whom this book is most applicable) of other legitimate readings of the text.