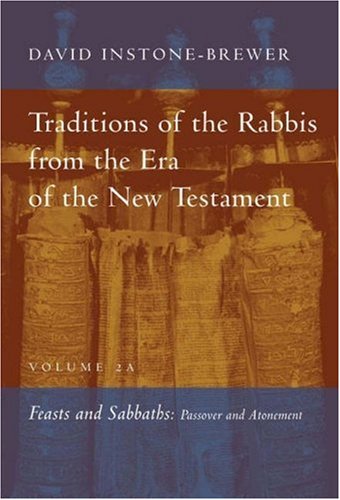 Feasts and Sabbaths: Passover and Atonement

Those of us who find value in examining the NT in its Judaic context find an embarrassment of riches in Josephus, Philo, the OT “Apocrypha,” select works often dubbed OT “Pseudepigrapha,” and the Dead Sea Scrolls along with a few other documents from the Judean desert. Yet the soils of rabbinic literature are seldom responsibly tilled. Either they are dismissed outright because of their late date (the compilation of the Mishnah is typically dated to ca. A.D. 200), or too often they are indiscriminately pillaged regardless of their late date. Very few of us have the skill and patience to pore over rabbinic material to discern what may actually predate the destruction of the Jerusalem temple in A.D. 70 for comparative analysis with the NT. In this second of a projected six-volume project, David Instone-Brewer, senior research fellow in rabbinics and the New Testament at Tyndale House, Cambridge, does this very thing.

His method for determining material dating prior to A.D. 70 is cogently summarized as part of an extended introduction to rabbinic traditions in Prayer and Agriculture, volume 1 of Traditions of the Rabbis in the Era of the New Testament (Grand Rapids: Eerdmans, 2004), 1–40. This summary distills Instone-Brewer’s published doctoral thesis, Techniques and Assumptions in Jewish Exegesis before 70 CE (TSAJ 30; Tübingen: Mohr, 1992).

The present work is organized according to mishnaic tractates: Shabbat (Sabbath), Érubin (“Communities” for the Sabbath), Pesachim (Passovers), Sheqalim (Temple Tax), Yoma (Day of Atonement). At first the organization seemed awkward to me, as I would have preferred something organized according to NT texts or subjects. Yet Instone-Brewer’s important observation that many treatments of rabbinic literature are driven by NT studies and fail to deal with rabbinic material in a systematic manner (p. xi) quickly cured me of my misconception. Readers not intimately familiar with rabbinic material have found an able guide in this volume. Each division of the book begins with definitions and outlines of the respective tractates. Transliteration of Hebrew terms are always present alongside, happily, original languages. Segments of the Mishnah are helpfully summarized in terms of content, and key texts for analysis are provided in English translation alongside (unpointed) Hebrew. The text is followed by commentary and a discussion of dating. The latter is accompanied by an indication of the degree of certainty regarding the date. This is often, but not always, followed by comments on points of commonality with various NT texts. These analyses are accompanied by a glossary of technical terms (organized alphabetically by transliteration and accompanied by [pointed] Hebrew; pp. 341–50). Indices of subjects, people and places, biblical, rabbinic, and other Jewish texts ensure the utility of Instone-Brewer’s work as a valuable reference tool.

The practicality of this book can be illustrated with a brief example. Amid an extensive discussion on tractate Shabbat, Instone-Brewer comments on m. Shab. 16.7 pertaining to the minimum amount of work permitted on the Sabbath to prevent harm. The rabbis allowed for the preserving of life, such as covering a lamp so as to prevent the burning down of a house, or placing a dish on a scorpion to prevent its sting. Instone-Brewer dates the tradition confidently before 70 c.e. and observes similarities to Jesus’ teaching pertaining to healing on the Sabbath (Mark 3:4//Luke 6:9; pp. 51–52). It is worth noting that Instone-Brewer deliberately avoids wrangling with secondary sources, and his engagement with the NT is far from comprehensive. Yet the primary value of this work is skillfully sifting through the volumes of rabbinic traditions in search of material that predates 70. This in itself is a monumental feat. That he provides the original text alongside English translation, analysis of the dating of respective texts while bringing attention to select NT texts enhances the project all the more. As a reference tool, Traditions of the Rabbis in the Era of the New Testament allows students of the NT to bring carefully selected rabbinic traditions into consideration alongside other Second Temple Jewish texts to which they belong. If assessing this book in terms of its aim—“to present the primary texts of the earliest layers of rabbinic literature in a way that is accessible to the non-specialist” (p. xi)—it can only be a most welcome success.