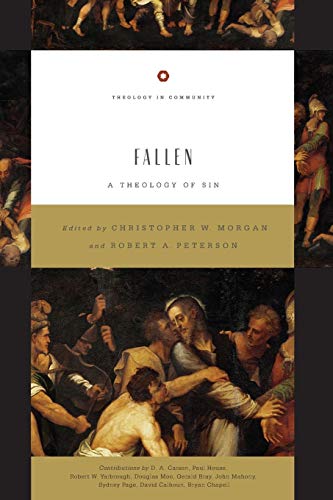 Fallen: A Theology of Sin

“There is no subject of greater importance to Christian theology than its understanding of the concept of sin and its effects” (p. 163). So goes the bold statement that begins Gerald Bray’s contribution to this volume. While the accuracy of this provocative statement can be questioned, it only takes a moment’s reflection to realize that if only half as important as Bray asserts, one’s ideas about sin have profound implications on one’s ideas about a panoply of theological loci. For instance, one’s notions about sin affect one’s view of humanity in relation to God (theological anthropology). But this in turn influences our conception of our need for a savior (soteriology), how we are saved (atonement), and what kind of savior is needed to bring this about (Christology). Further, including sin as a component of our running list of things that are “not the way they are supposed to be” (to reference Cornelius Plantinga’s seminal text) helps the pastor know how effectively to address a host of issues faced in pastoral contexts. Thus, it is particularly refreshing to see an attempt at an interdisciplinary approach to the treatment of this topic. Although biblical studies clearly has pride of place in the editors’ and contributors’ minds, perspectives from systematic, historical, and pastoral theology contribute to advancing this examination of the doctrine of sin.

In chapter 1, D.A. Carson shows his keen ability as a biblical theologian. It is slightly unfortunate, then, that he was called upon to write a chapter on sin’s contemporary significance. That would be an excellent topic for a chapter to open a volume of this nature, but Carson’s chapter is not that. Nevertheless, his biblical theological framing of sin as “rebellion against God’s very being” (23) provides a helpful leitmotif for the rest of the text.

Paul House’s twin chapters on OT conceptions of sin are some of the best material in this volume. He gives a penetrating analysis and clear presentation of the issues. Where “Sin in the Law” provides some definitional work, “Sin in the Former and Latter Prophets and the Writings” shows sin in action. These chapters bring to life House’s argument that the OT presents sin as “faithless rebellion against God’s character and God’s explicit word” (p. 40). (Quick sidebar: In recent years, there has been a renewal of interest in probing the intersection of philosophy and the theological disciplines [occasionally under the heading of ‘analytic theology’]. I found House’s presentations, with its clear definitions, distinctions, and structure, to be just the kind of biblical studies that could whet the appetite of an analytic philosopher.)

The explicitly NT section of the text is offered by Robert Yarbrough and Douglas Moo. Both these scholars manifest the sort of meticulous linguistic analysis for which evangelical biblical scholars are known. Tracing such terms as sin (ἁμαρτία), trespass (παράπτωμα), desire/passion (ἐπιθυμέω), transgression (παράβασις), and unrighteousness (ἀδικία), the analytical work here will save the exegete hours of time in Bibleworks/Logos/Accordance or TDNT/NIDNTT.

Chapter 6 is an attempt by Christopher Morgan to present a biblical theology of sin. However, the thorough nature of the exegetical work in chapters 2–5 makes this chapter seem rather superfluous. If one simply reads chapters 2–5 while thinking “Creation-Fall-Redemption-Consummation,” one can skip chapter 6. If you fear skipping a chapter lest you fall into committing that which the book is examining, I suggest reading this chapter first.

Gerald Bray has the monumental task of covering 2000 years of Christian theological reflection on the doctrine of sin in just 22 pages, and he even starts with 3 pages on pre-NT Jewish and Gentile notions about sin. Despite the necessary oversimplification his project entails, Bray presents a unified and lucid story about the challenges and reoccurring themes of reflections on sin. Bray’s piece displays the web of implications on many areas of theology that theologians have spun, especially focusing on Augustine, late medieval Roman Catholicism, Luther, Calvin, New England Puritans, and nineteenth-century evangelicals.

John Mahony’s piece, “A Theology of Sin for Today,” is the most creative contribution to the volume. In this chapter, he attempts to locate the doctrine of sin on a map of other theological topics. Thus, he tries to make explicit a notion that is stated numerous times in the volume, that the doctrine of sin touches on all aspects of Christian theological reflection. Mahony, likewise, also characterizes sin as fundamentally a rebellion: “the essence of sin is simply a willful act of rebellion against God” (p. 188). The most creative move Mahony makes concerns the relationship of Christ to Adam; however, it seems that Mahony could then have developed this a bit further. He does compare Christ and Adam with respect to the temptations they faced. But perhaps this article would have worked better had it been divided into two chapters, one on “locating sin on the theological map” and a second, “a christological lens for understanding sin.”

Chapter 9 is Sydney Page’s Satanology, a reminder that “the Bible speaks of supernatural perpetrators of evil” (p. 219). This chapter digests much biblical material regarding Satan. If the question is, “What does the Bible say about Satan?”, this chapter provides the answer. The most important thing the Bible says about Satan is that he is and will be defeated; Christ has overcome Satan, and that should be of great comfort to the person who, having studied the first part of this chapter, knows what Satan can do.

In the tenth chapter, David Calhoun connects the dots between sin and temptation. In so doing, he proffers some nice distinctions between temptation, trials, and tests. This treatment includes discussion of whether Christ could have been tempted and whether temptation might come from God. The practical upshot of the chapter is the exhortation, when faced with temptation, to trust God, obey his Word, watch and pray, flee and fight, and use your time wisely. Continuing the theme of “now what?” in the final chapter, Bryan Chapell “preaches” an encouraging sermon addressing this practical question. What do we do after our sinful rebellion? Repent! Repent and rejoice in knowing that Christ has removed the condemning results of our rebellious hearts.

As an overview of the doctrine of sin, this book is very helpful. One great virtue this book possesses is that without exception the contributors write in an inviting, pastoral style that is largely free from technical jargon. Thus, I would recommend this book to be used, at the right church and with the right pastoral leadership, as an adult education / Sunday school text. In fact, the text is quite suited to serve as the basis for a Lenten series, with roughly two chapters being discussed each Sunday in Lent. Chapters 1 and 6 would serve as a biblical introduction in Lent 1. The second week of Lent would focus on the OT themes of chapters 2–3. Lent 3 has the NT themes of chapters 4–5. Rose Sunday has the theological refreshment of chapters 7–8, with chapters 9–10 for Lent 5 before Palm Sunday rounds out with an exhortation to repentance in chapter 11, a fitting opening to Holy Week as the church commemorates Christ’s final victory over sin.