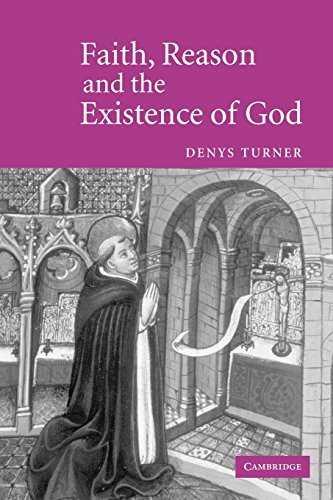 FAITH, REASON AND THE EXISTENCE OF GOD

In 1870, citing Romans 1:20, the first Vatican Council decreed ‘that God … can be know with certainty from the consideration of created things, by the natural power of human reason’. However, Professor Turner judges that nearly all contemporary philosophers doubt this and most Christian theologians think it to be incompatible with Christian faith.

Kant argued that theoretical reason cannot transcend the empirical world of phenomena, so that causal reasoning beyond the cosmos must fail.

Protestants following Karl Barth object that natural theology presupposes an ultimate commitment to reason rather than God, or that it creates an unbiblical polarisation between creation and the knowledge of God in Christ. Turner’s response is that these are not necessary implications of believing in the provability of God by reason. Faith in God can still be one’s ultimate commitment. The confidence in reason is grounded in faith. Human rationality shares in the sacramentality of all creation, signifying the sacred. Orthodox Christians should believe that God’s existence could be proved from the world: they believe that one can infer truths about God from truths about the created body of Christ e.g. that God died for us, so they must believe it is possible to infer truths about God from creation.

Many theologians fear that natural theology must involve what Heidegger famously condemned as ‘onto-theology’ i.e. viewing God as one being among many. Turner accepts that there is a danger of idolatry if reason studies God as it studies creatures, but he argues that proving that there is a God by reason need not imprison God within the bounds of reason of leave him on a par with mere creatures: apophatic and mystical theologians like pseudo-Denys and Meister Eckhart claimed that God so transcends our reason that ultimately our language fails to describe him. Turner then explains how theologians can consistently affirm that there is a God while denying that language is adequate to describe him.

Here, as elsewhere, he appeals to Thomas Aquinas. Unlike Duns Scotus, Aquinas held that our language about God does not have the same sense as our language about creatures, but neither does it have a separate sense. Rather, created language can refer to God in an analogical sense, because God is the cause of creation.

Turner argues that it is reasonable to ask why anything exists at all. Reason cannot understand the answer to this question but it seems arbitrary and unreasonable to deny there is an answer. This unknowable answer must be ‘God’. Reason indicates an explanation beyond the grasp of our reason. Our rational knowledge of God is thus based on knowing that the world is created.

This complex, wide-ranging book has an intentionally narrow aim, arguing that God’s existence is open to proof in principle, not proving it in fact. It rarely uses the Bible and neglects claims that God is perceived through creates rather than argued for. Turner’s statement that ‘saying that the world is created is how to talk about God’ is not harmonised with Aquinas’ claim that some things are true of God independent of creation. Turner hardly explores why God’s existence needs to explanation, and his apophatic theology involves such oxymoronic mysteries that the suspicion arises that he sometimes solves problems by appeal to worse ones. Nevertheless, Turner demonstrate that it is far harder to prove that God existence cannot be know from creation than many assume. Advance students of natural theology, theological language and Aquinas will find this as immensely stimulating read.