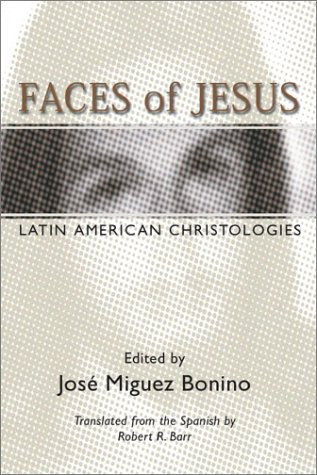 A collection of thirteen essays by Latin American scholars, this book is divided into four parts, the first two identifying Christologies present in Latin America today, the third detailing a new starting-point for Christology, and the last part being an application of some of the themes raised earlier in the book. The book does not pretend to be a full-blown Christology, accepting that its contribution is partial and fragmented. One possible drawback in such a format is needless repetition and that is one of the volume’s frustrating features, as common liberation themes are stated in several essays.

Bonino makes it plain in his introduction that the aim is not merely to restate old Christological themes from a different perspective, and certainly issues familiar to more traditional scholars are rarely found. Leonardo Boff’s use of biblical criticism which allows one to subject the gospels to ‘scientific scrutiny’ is somewhat familiar. Yet he is critical of liberal theology for its use of existential categories rather than rooting the message in history and taking the side of the poor. He offers a summary of his position outlined in ‘Jesus Christ Liberator’, seeking to argue that the divinity of Jesus is not to be sought outside his humanity. Is this to say he is no more than human? Boff is unclear. Similarly he insists that Jesus’ way is more than mere philanthropy because it is lived with reference to the Father, but he does not explain what the reference is in concrete terms that would distinguish it from philanthropy. The other two essays in part one are to illustrate what ‘inadequate Christs’ are proclaimed in Latin America today. This is to bring out the point that ‘a profound christological task lies before the Christian church’.

Part two takes this on a stage, looking at the meaning and significance of these inadequate Christs, how they were introduced with colonialism, and reinforce it, encouraging acquiescence among the oppressed. A balance is sought between proclaiming Christ as a heavenly monarch (reinforcing authoritarianism) and a suffering, passive servant (who only sympathizes with but cannot help the poor). To redress the travesty described in part two action is needed, and in the third part, ‘Jesus and Politics’, a basis for liberating praxis is laid. A true Christology will mean involvement, action, commitment to change society’s structures. Much is made of there being different Christologies in the NT, the suggestion being that one chooses whichever is most needed in one’s context, in this instance Jesus the liberator. Jesus is not portrayed as merely a revolutionary—he is not a Zealot—and his proclamation of the kingdom is not a programme or strategy for liberation but a religious, pastoral message, yet one which provides a dynamism for socio-political change. Though Jesus renounced violence and socio-political leadership, these actions are interpreted as prophetic and not normative for all Christians (see essay by Galilea). Croatto pictures a Jesus against tradition, laws and structures in order to let the human being emerge.

In part four Assmann denies that the search for better exegesis (Boff’s scientific scrutiny?) will provide a more accurate or appropriate Christology. Rather the conflict of Christologies is due to socio-political conflicts. Through praxis, in conflict, we work for liberation with no definite definition before us. Vidales argues that as we undertake the liberating praxis a new Christology arises ‘that will be incapable of formulation as a dynamic truth, because in a dogmatic truth the oppressed are never more than a human hypothesis’. Vidales, though, is more positive than Assmann on the validity of biblical studies.

Schurmann welcomes a number of trends in modern theology such as a resurgence of interest in the OT (NT is Hellenized) and functional Christologies, as only when the non-concrete ontological terms are thrown out can we have a relevant Christology to inform our praxis.

Rather than making a distinctive contribution to the theology of liberation in a particular subject (Christology) this volume with its somewhat uneven quality and views tells us little that we will not find in a more general introduction to liberation theology. Consequently one’s reaction to the book will be much as one reacts to liberation theology in general—and its challenges will be much the same, in particular in this volume the warnings about preaching an ahistorical (docetic) Christ.