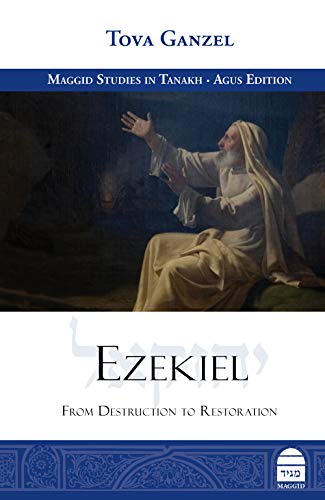 Ezekiel: From Destruction to Restoration

Tova Ganzel is a well-known scholar in the field of Ezekiel studies, teaching at Bar-Ilan University in Jerusalem. This study of Ezekiel was originally written in Hebrew (2012), and has recently been released in English. As an Orthodox Jew, her perspective on Ezekiel is different from the typical evangelical Christian fare, and so provides an interesting read.

Ezekiel is an expositional commentary, part of a series that melds rabbinic interpretation with modern scholarship. Ganzel often relies upon rabbinic interpretation. For example, in discussing Ezekiel 20:25, “I gave them laws that were not good,” she discusses interpretations from Targum Yonatan, Rashi, Eliezer of Beaugency, and Moshe Greenberg (pp. 154–55). She does not delve into many typical questions of critical scholarship, such as the relationship between the P source and Ezekiel, though she uses what she calls “intratextual exegesis” as a method, e.g., when comparing Ezekiel 6 and Leviticus 26 (p. 47; see also comparison with Deuteronomy on pp. 63–74). She studies Ezekiel in its final form as a whole text, taking the book at face value, written by the prophet during exile from Babylon.

Ganzel divides the book of Ezekiel into three parts: pre-destruction prophecies (chs. 1–24); prophecies against the nations (chs. 25–32); post-destruction prophecies (chs. 33–48). She argues that the prophecies revolve around the “central axis” of the movements of God’s glory in chapters 1, 11, and 43 (p. 8). Ezekiel’s purpose in the first section (1–24) was “to inform the people that God had departed from His Temple in Jerusalem” (p. 1). Ganzel helpfully emphasizes here that God’s decision to destroy was already made. God would not change from destroying Jerusalem even if the people did repent (which they would not do regardless). Thus, Ezekiel does not call the nation to repent, only individuals (p. 8). This is how, for example, she treats the calls to repentance in chapters 3, 18, and 33.

The second part of Ezekiel’s book contains prophecies about the nations (chs. 25–32). Ganzel states that their purpose is “to lay the foundation for Israel’s restoration” (p. 181). In fact, this is why many scholars consider Ezekiel 25–48 to be part of the prophecies of restoration (e.g., Block, Greenberg). As Ganzel goes through each oracle against the nations, she elucidates the historical context necessitating the mention of each nation.

The final part of Ezekiel contains prophecies after Jerusalem’s destruction (chs. 33–48). While Ganzel is correct to say that Ezekiel does not lament destruction the way Jeremiah does, she overstates her case in saying, “These prophecies contain nothing in the way of consolation, sorrow, reconciliation, or compassion over what has happened in Jerusalem” (p. 215). Yet this portion of Ezekiel provides multiple prophecies of consolation. While promises such as a “covenant of peace” (Ezek 34:25; 37:26) and a new temple do not directly mention Jerusalem, they indirectly provide hope for the people. As for the restoration, Ganzel claims that its climax comes in God’s purification of the nation (p. 231). She helpfully points out the use of water rather than blood to purify, signifying not mere forgiveness but cleansing (p. 233). Next, she interprets Ezekiel 37 as a restoration of Israel but stops short of saying that it will be an actual occurrence, calling it simply “timeless” (p. 250). She does, however, compare the establishment of Israel in 1948, after the Holocaust, to this vision of dry bones (p. 250).

Finally, Ganzel discusses the temple vision. She highlights its importance in the canon, calling it a “lone voice in a period of scant prophetic activity” (p. 280). However, the significance of the temple is not in the building, but that God will dwell amidst his people (p. 254). Ganzel’s view on the temple is unclear. She does not seem to think the temple, as described, can possibly be built (p. 282), but later says, “It may well be that our prayers for the Third Temple are that it be rebuilt following Ezekiel’s new plan” (p. 306). Finally, she makes a striking claim that the river vision (Ezek 47) is the climax of the book of Ezekiel as a whole. She calls it, “a way of bringing the Sanctuary into the very midst of the people” (p. 309). The cleansing ceremony of Ezekiel 36 now comes to all the people via this river. God distances himself from the people in the new temple, but connects the people to the temple by way of the life-giving river (p. 309).

An obvious feature missing in this commentary is a “Christ-centered interpretation.” However, there is much that evangelicals will agree with in this work. In fact, her work can help many who tend to skip exegesis of the original text and jump to certain Christian doctrines (e.g., regeneration in Ezek 37) or “how this text points to Christ.” The unique Jewish perspective will be a help to many evangelical students by forcing them to look at the text with different eyes. For scholars, Ganzel’s work provides a useful reference and unique perspective, but one should not expect discussion of critical minutiae. The work is most helpful to anyone teaching on Ezekiel in a local church context, whether pastors or laypeople.