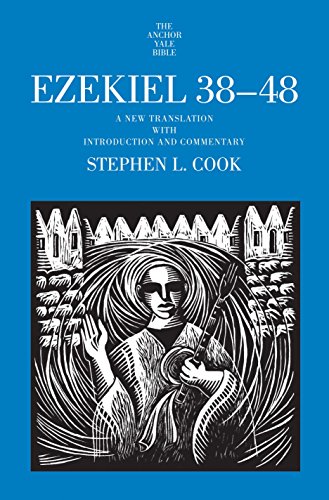 Ezekiel 38–48: A New Translation with Introduction and Commentary

When I began my study of the Book of Ezekiel back in 1989, good commentaries on Ezekiel were thin on the ground—particularly those that took the theological dimensions of the text seriously. An essential companion in my early work was Moshe Greenberg’s Anchor Bible volume, covering Ezekiel 1–20, written in 1983. That was later supplemented with Ezekiel 21–37, completed in 1997. Sadly, Greenberg did not live to complete a third volume, on Ezekiel 38–48; that task has been passed on to the capable hands of Stephen Cook, a regular presenter at the SBL Theology of Ezekiel group and professor of Old Testament at Virginia Theological Seminary. In the intervening time, the study of Ezekiel has exploded and the materials to be assimilated are vast, but there are few people in the world as familiar with this field of scholarship as Dr. Cook.

One of the attractions of Greenberg’s early work for me as an evangelical was his conservative conclusions about the history of the text. Greenberg wrote: “the persuasion grows on one [as one reads the book] … that a coherent world of vision is emerging, contemporary with the sixth-century prophet and decisively shaped by him, if not the very words of Ezekiel himself” (Ezekiel 1–20, AB [Garden City, NY: Doubleday, 1983], 27). Cook is not quite so conservative as that: indeed, he believes that these chapters may in some parts have a complex redactional history. However, like Greenberg, he starts with the received canonical form of the book (p. xi) and insists on a substantive core of material dating from the exilic period (at least prior to the completion of the temple in 515 BC). Here and there, he will allude to material he thinks is secondary but for the most part his primary focus is, as promised, on the canonical text as a theological document.

But what kind of theological document is Ezekiel 38–48? Often in evangelical circles it has been treated rather flatly as future history (38–39) along with the blueprint for a future millennial temple in Jerusalem (40–48; in spite of the fact that Ezekiel unequivocally locates it much further north!). Or, alternatively, the vision has simply been ignored: Ezekiel as a priest may have been fascinated by temples, but most modern readers are not. Cook argues, rightly, that chapters 38–39 are proto-apocalyptic and belong together with the utopian vision of chapters 40–48 as a literary piece with a message to its original exilic and post-exilic audience. Here, he is able to draw on the extensive research that has been completed over the past thirty years, exploring the form and function of the temple design and its relationship to the rest of the prophecy, including a variety of diagrams and 3-D reconstructions. Cook ably demonstrates its function as an imaginative world that allows for the critique of the past and an affirmation that things in the future will be different. Seemingly insignificant details now pop into focus as part of that larger project of rebuilding the world destroyed by the Babylonian conquest on a new and better footing.

In any work of this complexity there will be quibbles. I think Cook is mistaken in his view that Ezekiel 44:6–8 is in inner-biblical dialogue (i.e., conflict) with Isaiah 56 (p. 208). He focuses on the similar terminology used for foreigners in both passages (בְּנֵי־נֵכָר), without noticing the substantive and different qualifiers attached in both passages. The “foreigners” (בְּנֵי־נֵכָר) who are excluded in Ezekiel are “uncircumcised in heart and flesh” (44:7, 9), while the “foreigner” (בֶּן־הַנֵּכָר) who is welcomed in Isaiah is specifically one who has “joined himself to the Lord” (56:3). So, it is not as if Ezekiel has hung a “No entry” sign on Isaiah’s house of prayer for all nations; they are addressing entirely different groups of people. I also have mixed feelings about 3-D reconstructions of what is, as Cook notes, originally a deliberately “flat” ground plan. He says, rightly, “Ezekiel is less interested in visualizing buildings and structures than in the effort to control social space” (p. 7). Given that, there is a danger that 3-D reconstructions may confuse as much as they clarify, by placing the focus back on visualizing buildings and structures, and away from where Ezekiel intended it.

Overall, however, this is a masterful addition to the ever-growing stack of resources for understanding the prophet Ezekiel, and a worthy successor to Greenberg’s earlier work. It is a volume that no serious scholar can afford to be without.