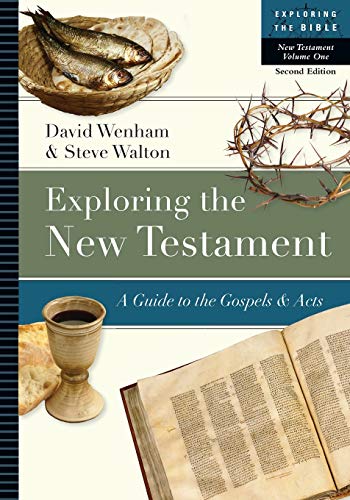 EXPLORING THE NEW TESTAMENT, VOLUME ONE: A GUIDE TO THE GOSPELS AND ACTS

The long-awaited first instalment of a two-volume, evangelical NT introduction and survey whets our appetite for the complete set. Wenham and Walton, lecturers in NT at Wycliffe College, Oxford, and London Bible College, respectively, have produced a state-of-the-art overview for beginning theological students. The work is very user-friendly, laid out in two columns per page, with numerous clearly labelled and organised sections and sub-sections per chapter, replete with helpful charts, diagrams, maps, bulleted points, sidebars, possible essay questions and helpful bibliographies. A glossary rounds out the work.

Section One sets the scene by presenting two chapters on political and religious backgrounds to the NT. The authors are very familiar with the ‘new perspective on Judaism’ and choose well in presenting its most valid insights. Section Two offers three chapters on approaches to the Gospels. ‘What are the Gospels?’ compares and contrasts Matthew, Mark, Luke and John with other ancient literary genres, also addressing why the Gospels were written and ‘why these Gospels?’ ‘Where did the Gospels come from?’ introduces and assesses source, form and redaction criticism. ‘Understanding the Gospels today’, the longest chapter in the entire book, covers the newer critical disciplines (sociological, literary and rhetorical criticism); suggests an overall method for exegesis; itemises specific principles for interpreting parables, miracles and apocalyptic; responds to questions about historicity; and sketches guidelines for using the Gospels today. On particularly controversial topics, Walton and Wenham present the major perspectives and often leave students to decide for themselves (cf., e.g., the sidebar on the Quirinius problem, 116).

The next three chapters fall in a section on ‘Understanding Jesus’. The first surveys the modern quests for the historical Jesus and their various criteria of authenticity (even including Tom Wright’s very recent and helpful double similarity and dissimilarity criterion). The second very briefly surveys the life of Christ in the life of history—an overview of its major stages considered in the light of historical developments of the day. Finally, the same ground is covered afresh addressing the teaching and aims of Jesus, with special emphasis on kingdom, ethics, self-understanding, Christology and Passion. In every instance, Jesus is well-earthed in his Jewish world despite his unconventional challenges to it at key junctures.

Four chapters survey each of the four Gospels in turn, dealing with themes, structure, an overview of the contents, and, most briefly of all, classic introduction, not always in the same order. On questions of authorship and date, the authors seldom side strongly with either standard conservative or liberal perspectives. The question of the historical value of John, not addressed in earlier sections, is raised in passing. A final main section has only one chapter dealing with Acts, following much the same subdivisions as the chapters on the Gospels, but with considerably greater attention to questions of historicity.

This book will compete with Elwell’s and Yarbrough’s new Baker volume and R. Gundry’s Zondervan survey, now in its third edition, as the best texts for what in the US would be college freshman NT survey courses. First-year BD students in the UK with no significant RE introduction to the NT from their school years may find its format and level the best of the three for them. Upper division college or beginning seminary students in the US as well as UK students with some previous background will want considerably more detail, especially on introductory questions and the survey of the life of Christ.