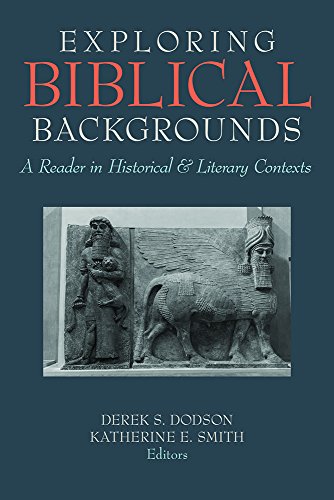 Exploring Biblical Backgrounds: A Reader in Historical and Literary Contexts

For many, one of the most daunting challenges in the study of the Bible is the task of ascertaining the religious, political, and cultural settings known to the biblical authors and their readers. Unfortunately, many of the ancient sources that reveal information relating to the background of the biblical writings are unknown to modern readers. While the works of Josephus, the writings of the Apocrypha, and the Dead Sea Scrolls have received considerable attention, many students of the Bible have not engaged in serious study of these writings, and fewer still are familiar with the plethora of other extant works from ancient times that illuminate our understanding of the world of the biblical authors and their readers.

This lack of familiarity with ancient sources is certainly understandable. For many, the non-canonical works of antiquity are obscure, inaccessible, confusing, or simply unknown. The sheer volume of these sources can be overwhelming and the material can be difficult to navigate. Readers often find it a significant challenge to acquire a basic knowledge of the content of even the biblical writings themselves, let alone the vast amount of extra-biblical literature from ancient times.

Despite the many challenges relating to the study of the ancient sources, the contribution that they have made to our understanding of the world of the biblical authors is difficult to overstate. As those who have engaged in a study of the background literature can attest, one’s knowledge of subjects such as the history of ancient Israel, the ministry and teaching of Jesus and the Apostles, the uniqueness of the Christian Gospel, and the challenges faced by members of the early church are greatly enhanced by the study of the relevant historical sources. Unfortunately for many students and lay readers who are interested in exploring the background of the biblical authors and their readers, few resources exist that enable non-specialists to examine for themselves primary source material in an accessible format. In order to meet this need, Derek Dodson and Katherine Smith, faculty members at Baylor University, have compiled a single-volume collection of English translations of several ancient texts that are of value in the study of the background of the biblical writings. As the editors explain, “This source book intends to assist undergraduate students (and the interested reader) in comparative reading of the Bible that emphasizes its historical and literary analogs. The selections are not exhaustive, but are representative of a wide range of material encompassing the entire Bible” (p. xi).

The volume is divided into two major divisions, one which includes ancient texts relating to subjects of particular relevance to the study of the Old Testament and one which contains texts of relevance to the study of the New Testament. The sources included in the Old Testament portion are listed under one of the following categories: “Creation and Deluge,” “Law and Ritual,” “Legends and Folktales,” “Epic Heroes,” “Inscriptions and Letters,” “Hymns and Prayers,” “Wisdom Literature,” “Love Songs,” “Laments,” “Apocrypha,” and “Rewritten Hebrew Bible.” The New Testament portion includes selections of texts placed under one of the following categories: “First-Century Jewish Groups,” “First-Century Prophetic Figures,” “Josephus on John the Baptist and Jesus,” “Messianism,” “Roman Imperial Ideology,” “Birth Stories,” “Parables,” “Miracle Stories,” “Ascension Stories,” “Double Dream/Vision Report,” “Early Christian Worship and Rites,” “Early Christian Leadership,” “Household Relations,” “Persecution and Social Harassment Christians,” and “Apocalyptic Literature.” In all, 109 ancient sources are included, some of which are fairly lengthy or include the entire source, while other selections contain brief excerpts of a relevant portion of a larger work. The editors provide a short introduction to each of the twenty-six categories treated in the volume, each of which offers basic information about the subject’s treatment and placement in the biblical canon, possible parallels between the biblical accounts and literature from ancient civilizations, and a list of additional sources for further study. Also included are short introductions to several of the primary sources, containing basic information about the content and background of the writing. At the end of each section, readers will find the bibliographical information for the particular English translation that is cited. Some translations date to the late-eighteenth or early-nineteenth centuries, though the authors do include a number of more recent translations when available. In some cases, the editors have provided an original translation.

Perhaps the closest equivalents to the present volume are Victor Matthews and Don Benjamin’s Old Testament Parallels (New York: Paulist, 2007) and C. K. Barrett’s The New Testament Background (San Francisco: HarperOne, 1995), both of which have been revised and updated over the years. Both of these volumes contain more overall material than what is included in the present volume and are limited in focus to topics contained in either the Old Testament or the New Testament. While by no means comprehensive in scope, Exploring Biblical Backgrounds offers non-specialists a convenient resource for the study of the historical and literary background of the biblical writings. Its accessible and user-friendly format, reliable translations, and value as a possible introduction to more advanced study makes the volume an ideal supplementary textbook for various courses in Old and New Testament while providing a valuable resource for interested readers to expand their knowledge of the biblical world.