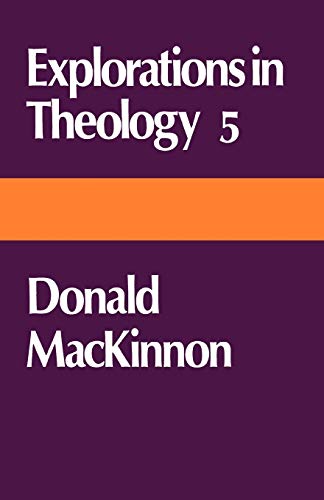 Recently retired from the Norris-Hulse Professorship in the University of Cambridge, Donald Mackinnon is one of the handful of truly first-rate British theological thinkers of the present day. He has not published widely, and earlier books, notably The Problem of Metaphysics and the collection Borderlands of Theology have perhaps not come to have the significance in current theological debate which their outstanding quality suggests they deserve. It is to be hoped that the present volume, which collects papers from a wide variety of contexts on an equally wide range of themes, will do much to elicit serious attention to his work.

The style is, as always, oblique and nuanced, frequently difficult but nearly always rewarding to the patient reader. One of the frequent moves of the different essays is to open up a topic of central theological or metaphysical significance out of a particular historical incident, embodying a seemingly abstract theme in concrete experience—as in the remarks on the lives of Tillich or Lenin, for example, or in the frequent references to political events in the present century. Such detail is not intended to furnish mere embellishment to an otherwise abstruse discussion. Rather, it advertises what is perhaps the most pressing concern which unites the papers brought together here: a concern for, often indeed, a passionate insistence upon, the inescapability of fact for the theologian and the metaphysician who finds the heart of the Christian faith in the incarnation of God in Christ.

It is from this concern that many of the themes treated here take their bearing. It is present strikingly in the two essays on realism and idealism, in which the author insists upon a realist theology: that is, one which refuses to identify the content of Christian theological affirmations as mere projected religious experience. It comes across in the frequent references to aesthetic experience as offering lessons which the theologian or philosopher ignores at his peril, for it is in poetry, fiction and especially in tragic drama that the irreducible complexity of human reality is captured: an essay on ‘the irreversibility of time’, for example, consists for the most part of reflections upon a novel by William Styron. It is most powerfully present in the scattered Christological reflections, where the author expresses his conviction that it is in the tragic quality of the life and death of Jesus that we are taken to the heart not only of many complexities of man’s ethical situation but also of his metaphysical quest. In all these areas, the author’s learning is astonishingly wide and profound; combined with the restlessly critical approach, it gives the work its excitement as well as its characteristic difficulty.

The collection takes its title from the series to which it belongs (and to which it is surely the most outstanding contribution so far): ‘Exploration in Theology’. It is an apt designation, for the essays witness both to the ambiguities of the human condition and to the necessarily tentative nature of theological and philosophical reflection upon it. Sometimes the fragmentary, unfinished state of much of the writing may frustrate, even disappoint. But that may well be one of the lessons Mackinnon seeks to teach, for, as he himself says in his introduction, ‘If the materials collected together in this volume have any lesson to teach, it is that of the many-sidedness involved in serious theological work. There are very many escape routes proposed for the avoidance of this discipline; if this strangely assorted gathering of papers succeeds in closing even one of them its publication will in a measure have been justified.’

The status of justification by faith in Paul’s thought: a brief survey of a modern debate

Mercy Triumphs Over Justice: James 2:13 and the Theology of Faith and Works

Three Current Challenges of the Occult

Christian Ministry in its Theological Context

by Craig M. Watts
VIEW ALL VIEW ALL

The Text of the Old Testament, An Introduction to the Biblia Hebraica

The Community of the Beloved Disciple: The Life, Loves, and Hates of an Individual Church in New Testament Times

Jesus and his coming

The Study of Theology

Reviewed by Bruce Milne
Systematic Theology
VIEW ALL VIEW ALL