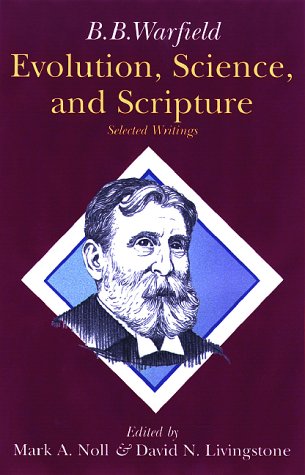 ‘The purpose of this book’, its editors state, ‘is to introduce and republish the most pertinent theological reflections of Benjamin Breckinridge Warfield (1851–1921) on the relationship between science and Christianity, with special attention to Darwin, Darwinism, and evolution’ (13). This collection of weighty writings is a companion to Charles Hodge’s What is Darwinism? and Other Writings on Science and Religion, also edited by Noll and Livingstone (Baker, 1994).

There are 31 reviews of books by a range of authors, some well-known (e.g. Kuyper, Bavinck, Orr) and others rather more obscure, and 7 substantial articles: ‘The Divine and Human in the Bible’ (1894); ‘Charles Darwin’s Religious Life’ (1888); ‘Darwin’s Arguments against Religion and against Christianity’ (1889); ‘The Present-Day Conception of Evolution’ (1895); ‘Creation, Evolution, and Mediate Creation’ (1901); ‘The Manner and Time of Man’s Origin’ (1903); ‘On the Antiquity and the Unity of the Human Race’ (1911); and ‘Calvin’s Doctrine of Creation’ (1915). The editors acknowledge John Murray’s critique (1954) of Warfield’s reading of Calvin, but draw attention to ‘the lengths to which Warfield was prepared to go in order to establish that Reformed orthodoxy could readily embrace evolutionary change’ (38).

Warfield carefully distinguished three ways in which God has worked in and through the physical world, and believed that, properly applied, these concepts were compatible with the theology he found in an inerrant Bible. ‘Evolution’ referred to developments arising from forces placed inside matter at the original creation, and directed to predetermined ends through providential superintendence. ‘Mediate creation’ meant the action of God upon matter to bring something into existence which could not have been produced by the forces or energy latent in matter itself. ‘Creation ex nihilo’ was the way that God made the original stuff of the world. In the editors’ estimation, ‘Warfield’s commitment to solid empirical science and to the concursus of divine and natural action gave him extraordinary balance in sifting his era’s difficult questions of science and faith’ (44).

The editors acknowledge that Warfield’s ‘writings on evolution, or, more broadly, on science … cannot, of course, pronounce definitively on theological-scientific questions at the beginning of the twentieth century’; nevertheless, they find his sophisticated and nuanced arguments much more helpful than the ‘heated strife that has dominated public debate on this subject’ since Warfield’s own time: he is ‘one of the best-kept secrets in American intellectual history’ (14). However, intelligent-design theorist William Dembski argues that Warfield’s approach—a virtually mechanistic account of creation, allowing for at least occasional supernatural intervention, with sustaining providence—has few advocates these days, and prefers to interact with Hodge (Dembksi, Intelligent Design [IVP USA, 1999], 92–93); and the claim on the book’s cover, that Warfield demonstrates how theologians have not always thought that naturalistic evolution and Christian creation are ‘irreconcilable ideologies’ (my emphasis), is surely over-stated.

No doubt some advocates of theistic evolution will, in polemics against creationists, continue to point to Warfield as an ‘inerrantist’ who could embrace evolutionary concepts. This begs important questions, not least exegetical ones—and there is little hard exegesis as such in these essays. It is frustrating that a question such as ‘did animals come under the law of death for man’s sin?’ is fleetingly mentioned (235–36), but not explored further.

In sum, then, this collection is of unquestionable value as an historical resource for the serious student of Warfield, but its relevance to the present-day dialogue between science and theology is debatable. In this respect, it may only serve to add fuel to the fires of ‘heated strife’.