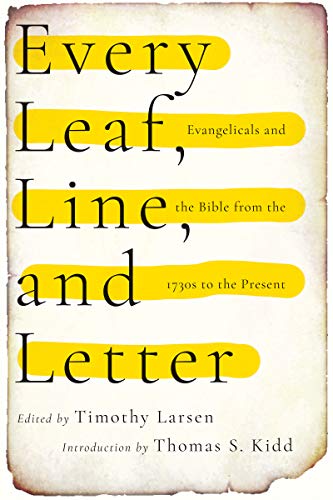 Every Leaf, Line, and Letter: Evangelicals and the Bible from the 1730s to the Present

“I was filled with a pineing desire to see Christs own words in the bible…. every leaf line and letter smiled in my face; I got the bible up under my Chin and hugged it; it was sweet and lovely.” Enraptured by the stirring preaching of the itinerant English revivalist George Whitefield, the Connecticut farmer Nathan Cole found solace for his troubled soul in the living words of Holy Scripture (pp. 1−2). Cole’s quest for a vital and authentic faith according to the Bible marks a critical continuity in the evangelical movement from its eighteenth-century origins to today. British historian David Bebbington sets biblicism alongside conversionism, crucicentrism, and activism as the four main characteristics of evangelical identity—a definition known as the “Bebbington Quadrilateral” (see Evangelicalism in Modern Britain: A History from the 1730s to the 1980s [London: Routledge, 1989]).

The essays in this collection examine the multifaceted nature of biblicism in evangelical history. They originated from a 2019 conference commemorating Bebbington’s distinguished career and the enduring influence of the “Quadrilateral” over the past three decades. The Quadrilateral and similar definitional approaches have recently faced increasing criticism from scholars who argue that they mirror their proponents’ essentialist constructions and normative theological agendas more than actual historical realities. Many plead instead for cultural history approaches to evangelicalism that devote greater attention to entanglements in politics, race, gender, social networks, education, media, and more. (For a helpful survey of the historiographical debates concerning evangelical history and a nuanced definitional approach, see Mark Hutchinson and John Wolffe, A Short History of Global Evangelicalism [Cambridge: Cambridge University Press, 2012], 1−24.)

As the authors in Leaf, Line, and Letter compellingly demonstrate, however, the two approaches are not incompatible but, in fact, mutually fruitful. On the one hand, their recognition of biblicism’s enduring importance throughout evangelical history furnishes an essential connective thread that integrates diverse women and men across centuries and lands in shared traditions, experiences, and communities (with exceptions, like the English liberal evangelicals examined in Timothy Larsen’s chapter). On the other hand, the contributors’ sensitivity not only to varieties of evangelical theology, practice, and church polemics (chs. 2, 3, 7, 8, and 10) but also politics (chs. 1 and 11), race (chs. 5, 9, and 11), age and gender (chs. 4 and 6), and global contexts (chs. 10 and 12) reveal that evangelical biblicism was never monolithic but always fluid, contested, and culturally conditioned. The combination in these focused studies largely preserves the sweeping historical continuities Bebbington identified while providing more complex and variegated analyses of evangelical biblicism in practice and social life.

The book has four parts organized chronologically from the eighteenth to the twenty-first century. The contributors are based in North America and Great Britain and include evangelical and non-evangelical scholars. There are several well-known historians such as Mark Noll, Catherine Brekus, Bruce Hindmarsh, Thomas Kidd, Brian Stanley, Timothy Larsen, and David Bebbington, as well as a handful of junior scholars.

While all the chapters are worth reading, I will only highlight select contributions to convey a sense of the book’s substance. Kristina Benham’s chapter opens the book examining evangelicals’ versatile and contested political uses of the biblical exodus narrative in the years surrounding the American Revolution, demonstrating how “biblicism could mean quite different things, especially when applied to national purposes” (p. 13). In chapter 2, Bruce Hindmarsh challenges Bebbington’s influential thesis that the Enlightenment was the key causal agent of evangelicalism, contending that evangelicals preserved pre-Enlightenment exegetical and devotional reading practices in the age of reason and science. K. Elise Leal probes an overlooked dimension of biblicism by incorporating children as pivotal historical agents in the construction of evangelical Bible cultures in the early American republic. Mark Noll examines evangelical antislavery and proslavery biblical arguments in the antebellum US, concluding that the impasse represented a crisis for traditional Protestant reliance on sola scriptura—a crisis that endures in American evangelical debates over race still today. In his analysis of Francis Grimké’s sermons against lynching, Malcolm Foley observes that while evangelical biblicism and activism have long intersected, White and Black Christians have generally diverged over what constitutes “worthy activism” (p. 197)—particularly when it comes to applying Scripture to racial justice. Catherine Brekus utilizes The American Patriot’s Bible, edited by Southern Baptist leader Richard G. Lee in 2009, as a window into “the long and close relationship between evangelical biblicism and White Protestant nationalism” (p. 275). Finally, Brian Stanley asks whether the Quadrilateral applies to non-Western global Christians, concluding that it still more or less holds but has significantly adapted to new environments.

As a whole, the chapters provide a panoramic and complex portrait of evangelical biblicism over the past three hundred years. Yet they also offer significant interventions as individual studies in their respective historical eras and subject areas, be it political ideology in the American Revolution, lynching in the era of Jim Crow, White nationalisms, and more. Evangelical readers will gain new historical insights about their tradition, and they will discover anew the fact that while God’s word remains timeless, one’s uses and misuses of it are often conditioned by ever-shifting cultural contexts. Generations of evangelicals have echoed Cole’s fervent desire to encounter God truly and spiritually in the word. However, biblicist commitments to harmonize Scripture and one’s world has also often yielded mixed results—in some cases applying the Bible to overcome the injustices and errors of one’s culture, in others, using it to sanction and expand them. Learning from history can help evangelicals discern the difference and grow more aware of the cultural influences and social commitments that shape their reading and application (or misapplication) of Scripture.