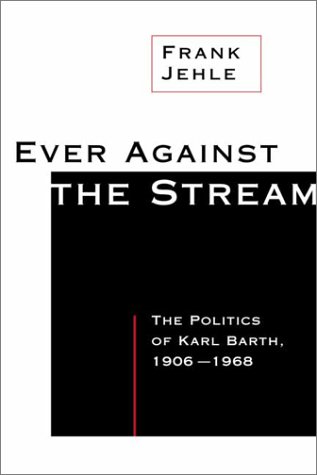 Of making many books there is no end, especially when it comes to secondary literature on Karl Barth. Any prospective author seeking to add to that already bloated body today must of necessity justify his contribution. Frank Jehle almost certainly has. In this work, thorough and original research has been so compiled as to present a riveting short narrative of Karl Barth’s involvement in the world of politics.

Feeling that the facts will speak for themselves, with little need for his own (usually sympathetic) comment, Jehle sets out to tell Barth’s story, often using Barth’s own words to do so. Starting with Karl Barth the student, the reader is shown the young theologian’s appreciation of the political dimensions of his own Reformed heritage before being whisked off with him to Safenwil to see the ‘red pastor’ beginning to apply his beliefs to the situation of the textile workers in his parish. From Safenwil the scene moves to Bonn, and Barth’s involvement in the debates regarding National Socialism, leading up to the drafting of the hugely significant Barmen declaration for the German Confessing Church in 1934. Jehle then shows Barth’s forced return to Switzerland the following year and his critique of the overall failure of the Swiss government and people to confront the National Socialism on their doorstep, which critique was to usher in decades of tension between himself and the authorities (resulting in his phone being tapped and his near-incarceration). After narrating Barth’s further critique of his country’s failure to show compassion to post-war Germany and his subsequent, awkward stance towards Communism, Jehle finally wraps up the story with a carefully nuanced appraisal.

What emerges from this account is a picture that thoroughly absolves Barth of the charge of being an introverted, ivory tower theologian. Not only did he put his life and body where his theology was, but also much of his theological writings are shown to have had direct relevance to the political issues of the day. Furthermore, Jehle shows the laudable degree of consistency Barth maintained between his theological and his political thought, so modelling a theologically based approach to day-to-day life. Thus at every stage of life Barth is shown to be as provocatively non-conformist in his politics as he was in theology. A confessing church, he believed, must confess. Thus it must speak out; and that means going against the stream.

All this is not to say that Jehle is uncritical of his subject. He is extremely even-handed in his assessment of Barth’s initial failure to denounce Stalinism, for example. If there is one example of oversight, it is his complicity with his compatriot in leaving unquestioned the basic political matrix of his own country, which was democratic republicanism. Whilst Barth never sought to go against the stream for its own sake, such presumption seems to be inconsistent with his basic theological method. And it is that method and its practical application which this book has sought to hand over as a legacy to the church. For being so engaging an effort to do so, it is to be highly commended.