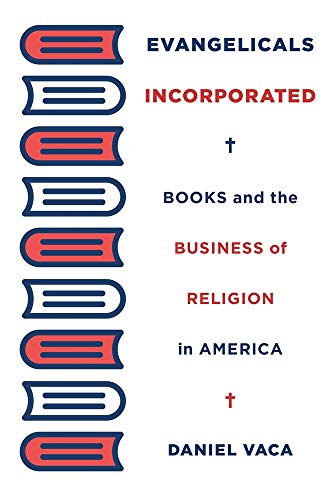 Evangelicals Incorporated: Books and the Business of Religion in America

What hath Grand Rapids to do with American evangelicalism? According to Daniel Vaca’s newest volume, almost everything. In Evangelicals Incorporated: Books and the Business of Religion in America, Vaca, the Robert Gale Noyes Assistant Professor of Humanities at Brown University, argues that commercial initiatives, especially as they relate to the publishing industry, have defined and maintained evangelicalism as a discernable movement. Through a blend of storytelling and analysis, Vaca seeks to demonstrate that the publishing infrastructure “became the bedrock of evangelical cultures” to such an extent that evangelicalism can best be understood by its commercial foundations (p. 17).

Vaca begins with an examination of the “Moody market,” an ecumenical and middle-class evangelical “public” (a distinct group of consumers) focused on the ministry of Dwight Moody. Proliferated by the shrewd Flemming H. Revell, this public became the precursor to the commercialism of later enterprises (p. 56). New efforts resulted from Revell’s entrepreneurial spirit, including the Bible Institute Colportage Association, which supplied rural areas with inexpensive books from Moody and his associates (p. 49). These arrangements, though financially lucrative for the publisher, were undertaken with a nod to the greater mission of God. This tension would remain in the years to come.

Next, Vaca examines the development of two towering publishing companies based in Grand Rapids, Michigan: Eerdmans and Zondervan. Vaca demonstrates that these companies carefully curated their images through relationships with authors, retreat centers, and networks. Their distinct brand identities were forged in the crucible of commercial competition and a fair amount of family drama (pp. 84–95).

Vaca then turns to the role that trade associations and marketing strategies played in the boon of evangelical book sales in the mid-twentieth century. Organizations like the National Association of Evangelicals “identified publishing and bookselling as trades that … had the power to enhance evangelical allegiance” (p. 109). The industry adopted creative strategies to reach new customers and retain current ones. Specifically, publishers targeted women as “primary consumers and laborers” (p. 135) and capitalized on the nation’s growing youth culture. By mimicking the merchandising strategies of supermarkets (including a distinct suburban ambiance), booksellers delivered “cultural commodities” that functioned as “engines of evangelicalism” (p. 160). Bookstores especially served as gravitational hubs that kept evangelicals from various locations connected through their shared experiences.

Evangelicals Incorporated is an engaging account of the commercialistic spirit of American evangelicalism. Vaca moves seamlessly between history, economics, marketing, and sociology to craft a unified narrative. He captures macro currents and micro episodes, providing the reader a scholarly treatise sprinkled with anecdotes (many quite humorous) conveying the humanity of his subjects. Vaca challenges certain preconceived notions and uncovers others that haven’t been explored at length. His discussions regarding the ethnic dimensions of evangelical publishing, the role of women in the industry, and the phenomenon of celebrity authors (some of whom exhibit little Christian fruit) finding success among evangelical consumers are all insightful.
Despite the crisp writing, detailed research, and coherent narrative, I am not convinced that commercialism carries the same explanatory power for evangelicalism that Vaca does. Ultimately, I think he stresses the sociological and commercial at the expense of the theological. He sees doctrinal definitions as insufficient to capture the lived experiences of evangelicals (p. 8). However, there are good reasons to see economic and political emphases as somewhat novel rubrics for evangelicalism and to see theological criteria as the more rooted lens through which to understand the movement. Vaca’s perspective gives insight into the dynamic activities of evangelical publishers and defends the conclusion that commercialism has played a (if not the) role in evangelicalism’s story.

Because the book draws from numerous disciplines, it has broad appeal to scholars in various fields. Readers interested in American evangelicalism, American culture, marketing, economics, and media studies will all benefit from Vaca’s work. Students will find it a stellar example of crafting archival research into readable and entertaining prose.

What hath Grand Rapids to do with American evangelicalism? More than we have recognized, and Vaca uncovers the important ways that commercial enterprises have informed this movement in a uniquely American fashion.