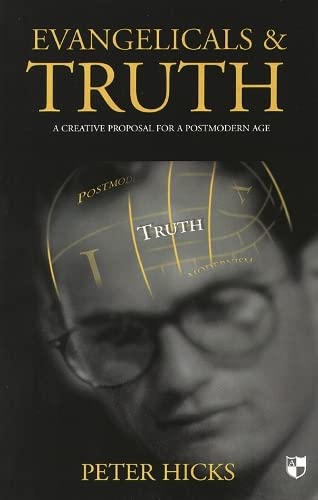 Evangelicals and Truth: A Creative Proposal for a Postmodern Age

Despite its title, this is not a book just on truth, but also on epistemology, in particular, the way one should structure one’s beliefs. The book falls into three parts. Part One is a whirlwind tour of the history of philosophy. Hicks begins by describing the traditional pre-postmodern concept of truth, continues by analysing evangelicalism, proceeding to interrogate the history of philosophy on its concept of truth and its views on how one should structure one’s beliefs. He then races through, from Plato to postmodernism in 17 breathless pages.

In Part Two Hicks interrogates the history of evangelicalism starting with the Reformation, and then proceeding through a rather Idiosyncratic list of representative figures in the history of evangelicalism: Jonathan Edwards. John Wesley, Charles Hodge (Hicks’ speciality), B.B. Warfield, J. Gresham Machen, P.T. Forsyth. James Denney, Carl Henry. Helmut Thielicke, Herman Dooyeweerd, Cornelius van Til, Francis Schaeffer, Alvin Plantinga, Nicholas Wolterstorff, Bernard Ramm, Anthony Thiselton, Peter Cotterell, and Max Turner. Out of these, only Hodge, Henry and Thielicke gets a chapter to himself. Despite the variance among these thinkers, Hicks treats them all sympathetically and attempts to extract a common set of epistemological views from them, to stand as the evangelical tradition. Hicks concludes Part Two with a survey of the contemporary evangelical scene. Having completed his historical surveys of philosophy and evangelical theology, he ambitiously tries to’ explore what evangelicalism might have to offer in the face of the collapse of our concept of truth’ (133). This may well surprise some readers, as it did the reviewer, who was not aware that our concept of truth had collapsed. Hicks puts forward his replacement basis for truth: the concept of God. He then goes on to analyse this concept and that of the image of God, aspects of human personhood, truth in the Scriptures, and concludes by trying to show how his replacement preserves all the best features of evangelicalism.

Hicks’ work is strongest in his historical exposition of other theologians, but the reviewer found the other parts disappointing. There is hardly any discussion of what truth actually is: the correspondence theory of truth is briefly quoted from Edwards, but no mention is made of any other theories. In addition, many times when Hicks uses the word ‘truth’ he seems to mean ‘knowledge’: ‘truth can be expressed in personal and in propositional form’ (142)—what is actually at issue here is the difference between knowing a person and knowing a proposition. Hicks also frequently talks about the ‘justification of truth’ (19, 21, 191), but again truth per se needs no justification, it is our beliefs that need justification. I found even Hicks’ principal thesis confusing: on one and the same page (155) he says both ‘I shall pick up … the use of the concept of God as a basis and justification for truth’ and ‘it is not the intention … to introduce the concept of God in order to supply an explanation for meaning and truth’. Also, Hicks never defines key terms such as ‘reason’.

However, the book includes a useful glossary, detailed footnotes, and a fairly good index, and is attractively set out.