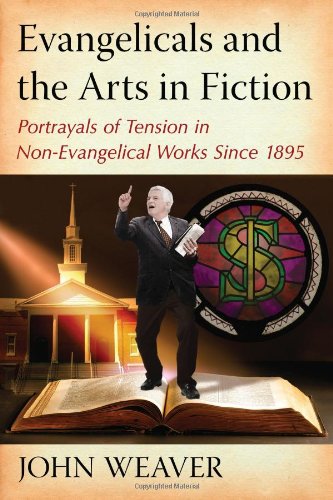 Evangelicals and the Arts

This book is as disturbing as it is fascinating. Contained in its eight chapters, as well as the preface and introduction, is a presentation and critique of some thirty novels and films that interact in different ways with evangelical Protestantism, mostly in twentieth-century America or Great Britain. Specifically, both in his assertions and in his analyses of these works, Weaver addresses evangelicals’ attitudes toward the arts. His thesis is straightforward: Evangelicals made a huge tactical (and theological) mistake by developing a “worldview” approach to culture. Instead of “engaging” or “transforming” culture, they ended up so accommodating the “world” that they unwittingly blended in with it, and thus became culturally ineffective. They would have been better served by keeping to the agenda of saving souls than engaging in cultural transformation. This mistake is particularly evident in their posture toward the arts, but is characteristic of every implication of worldview thinking.

Enter fundamentalism. Somehow fundamentalism is more honest than evangelicalism. Weaver believes that there are important similarities between dispensationalist fundamentalism and Marxist historiography. He employs the expression “spiritual capitalist impulse” to identify the chief reason for their ineffectiveness in the project of transforming the arts for Christ. Whereas the fundamentalists hoped for the “rapture of the arts,” wherein finally their anti-art views would be accepted, and predicted there would be a dictatorship of the “spiritual proletariat,” rather than the success of worldview people, so far it has not borne fruit (p. 5). A major disappointment? The failure to achieve these ends is the subject of Weaver’s book. The ascendency of evangelicals over the fundamentalists is to be blamed.

One of the reasons Weaver advances for this failure is that evangelicals do not have a credible way of distinguishing art from non-art. In this way they cannot rise above the surrounding relativism. Weaver cites the subversive work of Marcel Duchamp, the arbitrary importance of tattoo art, and the misnomer of “the Holocaust as art” as examples of this liminal dilemma. To those who think you “just know” when an object is a work of art or not, he answers, but “how?” He blames Arthur Danto, the premier art critic of the twentieth-century, for the self-refuting relativism that says, “art is in the eye of the expert beholder.” Such a view cannot hope to survive without becoming elitist, since in the end, for Danto, only the expert can legislate what is art and what is not (p. 15). Apparently evangelicals, in order to counter modern relativism, unwittingly bought into another kind of anti-relativism, different on the surface from Danto’s, by positing absolutes in the arts based on the reality of God’s revelation. They are no better, though, in effect, than anyone else who imposes arbitrary absolutes, including the Nazis, the Soviets, and the McCarthyite approaches to the arts (p. 17).

Although he fits in with the reprehensible “worldview” approach, Francis Schaeffer is treated with considerable sympathy, as is his controversial son, Franky. I am guessing there may be some psychohistory here. Nevertheless, in the end the worldview advocates, including the Schaeffers, cannot help but be triumphalists, and also naïve about why modern art developed the way it did. Along the way, it must be said, Weaver renders some helpful insights into the Schaeffers, and their associate Hans Rookmaaker, who are the best of a bad lot.

Thus, there is truth in these judgments. Surely there can be an unhealthy triumphalism among certain worldview advocates. And Weaver is right to highlight some of their shallow views of modern art. For example, he faults Francis Schaeffer for only seeing in the art of the twentieth century a reflection of the “fragmentation” of the contemporary epistemology of many contemporary people (p. 22). But surely modern art is about much more than “fragmentation.” And Weaver rightly questions worldview people for advocating a sort of pure art, free from the constraints of money or other practicalities. Such a view, he says, is advocated by Franky Schaeffer, by Hans Rookmaaker, and by Tim Keller, for whom Weaver has particular antipathy (pp. 25–27).

The shadow of John Carey is strong here, as Weaver gladly admits. Carey, the former professor of literature at Oxford, is known for his anti-elitism. His What Good Are the Arts? (Faber & Faber, 2006) attacks the spirit of aesthetic privilege from every conceivable angle. Carey’s culprits are Ruskin and Kant, who described beauty in quasi-religious terms, leading to an attitude of “superiority” over the Philistine populace. For this reviewer Carey’s work is frustratingly simple and singularly lacking in balance. For Weaver it provides the background for his critique of both evangelical and secular advocates of high art.

The most interesting portions of Weaver’s text are his reviews of various works of literature and a few films. Here he is the professor of literature (which he teaches at SUNY Binghamton in New York). His analyses are thorough and engaging. He addresses works such as Harold Frederic’s The Damnation of Theron Ware, Sinclair Lewis’ Elmer Gantry, Nathaniel West’s Miss Lonelyhearts, James Baldwin’s Go Tell It on the Mountain, Margaret Atwood’s The Handmaid’s Tale, Frank Schaeffer’s Portofino Trilogy, and a host of others, each time not only teasing out the critique of evangelicalism they contain, but commenting on the fairness or unfairness of such critiques.

I have to say that Weaver’s commentary is penetrating and at times even riveting, which is an accomplishment for anyone going through so many novels and films. He avoids sounding like Cliff Notes, because his main theme is constantly in the purview. What so many of the novelists get wrong about evangelicalism, he argues, is the caricature that such Christians are anti-art, or simplistic in their cultural analysis. The novelists are wrong, and Weaver demonstrates where and how. And yet he believes there is a grain of truth in their assessments. For here is precisely where evangelicals have not been well-directed. They cannot disavow the accusations against them because they are guilty of the same sort of paternalism as their critics, although their ultimate norms are somewhat different. And in the process, therefore, they have become incapable of making a difference in contemporary culture as they had hoped to do.

While it is not clear whether Weaver has read any of the “Two Kingdoms” literature, he often echoes the point of view held by its adherents. He tells us he is no longer a member of the evangelical community, but at the same time he appears quite familiar with much of evangelical thinking. The problem is that he engages in some caricature of his own. Comparing as he does the supposed elitism of evangelicals with the secularists’ Kant-based snobbery about aesthetics is not convincing. First, because although certainly Kant is not an apologist for biblical Christianity he has made important contributions to finding ways of describing aesthetic judgment that are far more complex than Weaver imagines. He was concerned in his Critique of Judgment to distinguish the judgment of beauty from that of pure cognition, a point not considered by Weaver. Second, Kant also wrestles intensely with the term “beautiful,” going far beyond the simple view that makes beauty merely a matter of taste. For example, Kant argues that not every predicative use of the word “beautiful” signals the making of a judgment of beauty, at least in the paradigmatic sense with which he is concerned.

Furthermore, the various advocates for worldview thinking are not all as simplistic or triumphalist as Weaver maintains. For example, Calvin Seerveld, whom he cites in the bibliography but does not interact with in the text, certainly qualifies as a worldview thinker when it comes to the arts. Seerveld’s subtle, nuanced philosophy of modern art does not fit Weaver’s image of the hegemonic classicist. Another example is the remarkable New York novelist Larry Woiwode, a Reformed believer who follows Cornelius Van Til, and writes in powerful prose about family issues and the problematics of living in the matrix of the modern world. Woiwode and other Christian writers of his ilk are simply not mentioned. In answer to many Christians who have hitched their aesthetic wagons to the star of the British literary movement known as the Inklings, Weaver is most critical. He does not care for the likes of Tolkien and other “mythopoeics,” and yet he does not give them much of a chance. As to painters, he dismisses Makoto Fujimura’s views as mimicking secularists “like parrots.” And yet he does not venture into the rich contributions of Fujimura’s Nihonga Abstract Impressionism except to call it an inadequate alternative to contemporary aesthetic standards (p. 18).

A better way to approach the subject of evangelicals’ often admittedly insufficient approach to aesthetics would be to take a second look into worldview thinking and see whether it could not be salvaged and enriched rather than panned as equivalent to theocracy. There is much more than meets the eye. To ask the church to restrict its agenda to saving souls in the end ties its hands behind its back, and prevents it from doing the kind of cultural critique Weaver does rather well in this perplexing book.