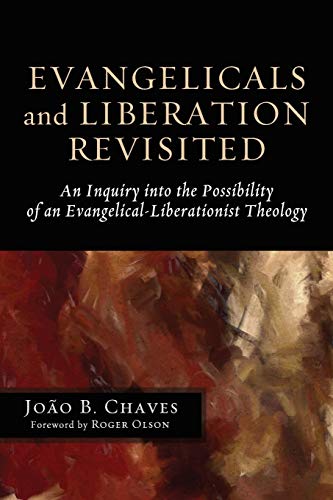 Evangelicals and Liberation Revisited: An Inquiry into the Possibility of an Evangelical-Liberationist Theology

Chaves, the Brazilian professor at the Baptist University of the Americas, argues that later developments in both North American evangelicalism (NAE) and Latin American Liberation Theologies (LALT) have drawn them theologically closer than ever before. His thesis might be hard to swallow, but Chaves delivers well-researched, painstaking and compelling argumentation to convince any skeptics. Starting with outlining LALT and NAE’s histories of reaction and renewal Chaves demonstrates that both of these movements have been morphing and adapting to accommodate new insights and to include criticisms. In this process they have moved in a way that it is possible today to speak of an Evangelical-Liberationist theology, something considered an oxymoron not long ago. “An evident resemblance between the two movements is that both have roots in reactions to a perceived exaggerated focus on orthodoxy that arguably paralyzed other significant aspects of authentic Christian experience” (p. 34).

On hermeneutics, for instance, an issue that initially brought upon LALT strong rejection from NAE, Chaves points to a “pervasive interpretative pluralism” among NAE to prove that external factors “such as context or personal experience have a bigger role in the hermeneutical process than conservative evangelicals are willing to acknowledge” (p. 48). Therefore NAE had no business criticizing LALT for developing a contextual interpretation of the Bible. Because “objective hermeneutic is impossible,” like it or not, NAE’s hermeneutics was also contextual.

Other hot topics for NAE regarding LALT were the use of Marxist categories, endorsement of violence, and push for socialism. Initial responses killed any possibility of dialogue. NAE representatives did not spare any words to criticize LALT on what they saw as a capitulation to social sciences. Chaves explains that in these three topics LALT has shifted significantly from its early version due to changing conditions in the region. Even though Marxism continues as an analytical tool, its use lately is more nuanced and limited. The same could be said about endorsing socialism. LALT has recently recognized that a market driven economy might be a better solution and has adopted a more democratic socialist position bringing it closer to NAE. NAE’s criticisms of LALT’s endorsement of violence have been inconsistent with NAE’s support of military endeavors of the USA. “It is not difficult to see this inconsistency in evangelicals who condemn any revolutionary discourse as heretical but celebrate vigorously the American Revolution—especially in the traditionally nationalistic worship service of the Fourth of July” (p. 66). Chaves argues that “Evangelicalism and LALT have not only grown closer together in their socio-political commitments, but also they no longer need be perceived as contradictory when it comes to these issues” (p. 69).

Not all subjects that both camps deal with can be easily reconciled though. Chaves compares James McClendon Jr. and Gustavo Gutierrez on the relationship between church and the world and on soteriology. Each man has a different tradition and ends up on the opposite side of the other. But even this should not keep them from mutual dialogue. Chaves’s description of Leonardo Boff’s Christology is another example of how two different views on this particular doctrine need to learn from each other. By dismissing it as reductionistic and incomplete NAE is missing important correctives to its theology.

Developments in Post-Conservative Evangelical Theology (PCET) have helped build bridges between evangelicals and LALT. Chaves presents several features of PCET and argues that these manifest a change that brings awareness of traditional conservative evangelical theological shortcomings. Interaction with LALT by Latin American evangelicals has also been ambiguous but more positive in general: “Latin American evangelical theologians use a variety of liberationist theological contributions in the construction of their own theologies” (p. 117).

Chaves leaves the reader with a hunger for more. His argumentation reaches the goal of presenting the possibility of an evangelical-liberationist theology. His call to mutual respect and dialogue is commendable: “I am confident that LALT and Evangelicalism are not necessarily contradictory movements, and characterizing them as contradictory is not appropriate if their respective diversity and dynamism is taken into consideration. In a world where structural injustice and impiety run wild, a theological approach that combines the strengths of both Evangelicalism and LALT is more needed than ever” (p. 130). Amen! This book definitely charts an agenda for Christians who want to grow in their faith and commitment, especially evangelical theologians.