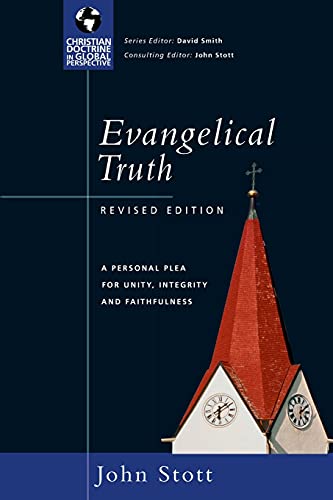 After more than 50 years of Christian leaders, John Stott—above all others except perhaps Billy Graham—is recognised as the authentic voice of twentieth-century evangelicalism. So when he produces what he himself calls ‘a kind of spiritual legacy’, a brief statement of evangelical faith and an appeal to the rising generation of evangelicals, then all who love the gospel which he has so ably proclaimed and defended are bound to sit up and take notice.

Evident throughout the book is Stott’s concern for evangelical unity. He makes no secret of the fact that he continues to be ‘profoundly grieved by our evangelical tendency to fragment’. He asks ‘[w]hile holding with a good conscience whatever our particular understanding of the evangelical faith may be, is it not possible for us to acknowledge that what unites us as evangelical people is much greater than what divides us?’. His basic argument is that evangelical fragmentation is unnecessary and could be avoided by a greater degree of discernment about what are ‘evangelical essentials which cannot be compromised’ and what are ‘adiaphora’ (“matters indifferent”) on which, being of secondary importance, it is not necessary for us to insist’.

The principle of distinguishing essentials and adiaphora is self-evidently important. Just as important is a clear understanding of the criteria to be used when making this distinction. Stott is quite aware of this and proposes that we acknowledge genuine and sincere disagreement between ‘equally biblical Christians’ to be an indicator that the matter in question is not essential to evangelical identity. However, readers are bound to ask whether such a criterion is as helpful as it appears. Is a sincere difference of opinion among biblical Christians sufficient grounds for declaring an issue to be ‘a matter of indifference’? Surely even the fact that we may all agree that something is indifferent does not make it so. After all, the lingering presence and influence of sin in our lives may show itself in a refusal to submit to the truth. Furthermore, the entire project of distinguishing between essentials and matters of indifference is complicated by the simple fact that gospel truth is coherent. There are points of connection between various Christian doctrines as well as between those doctrines and elements of practice. Once such connections are seen and appreciated it is much more difficult to separate the essentials and the matters of indifference.

Though the call for unity among evangelicals is the subtext of the entire book, its three central chapters are an exposition of evangelical truth with special attention to its trinitarian form. Here John Stott is at his best: clear, stimulating, insightful, and most of all, always committed to the Scriptures. He presents the basic elements of evangelical theology under three headings: The Revelation of God, The Cross of Christ, and The Ministry of the Holy Spirit. Such a way of explaining evangelical truth has the great strength of focussing on God himself. From the beginning to end, evangelical theology speaks of God and what he has done, is doing and will do.

The second major chapter, dealing with the cross of Christ, includes a powerful assault upon any notion of human boasting in our own ability to save ourselves. A proper understanding of the cross involves a correct assessment of our own condition. We stand before God corrupted and guilty, living under the curse which must fall on all who rebel against the living God. This is why the penal substitution of Christ—his bearing the penalty that we deserve in our place—is such good news. John Stott insists that such an understanding of the cross is ‘a distinguishing mark of the world-wide evangelical fraternity’. He dismisses the caricature which pits the love of the Son against the justice of the Father, as well as that misunderstanding which pictures Jesus as a third party who intervened between God and us. The glory of the gospel which lies at the heart of evangelical thought and practice is that God himself has, in Christ Jesus, acted out of love to take our place, to bear our sins, to endure our curse, and to die our death, so that we might be forgiven’.

The third part of Stott’s explanation of evangelical truth deals with the ministry of the Holy Spirit. Under this heading he describes what he calls ‘six main stages or aspects of Christian discipleship’ which ‘would be impossible apart from the operation of the Holy Spirit’: the new birth by the Spirit; the assurance provided by the Spirit and anchored in the cross; the sanctifying work of the Spirit; the church gathered and equipped by the Spirit; the evangelistic work of the Spirit; and the hope guaranteed by the gift of the Spirit. There is much here that gives us a clear, biblical perspective on the indispensable work of the Holy Spirit. However, when Stott turns his attention to the controversy surrounding the charismatic movement, it is hard not to conclude that he fudges. He tends to gloss over the theological consequences of decisions taken on these issues. His suggestion that division on this issue to ‘an excess of rigidity’ is less than convincing. It is true that these debates may not always have been handled appropriately, but that does not mean the debates themselves are unnecessary or of secondary importance.

The book concludes with a fivefold challenge from Philippians 1:27–30. Here the plea that underlies the entire work is brought into sharp focus. John Stott calls on the evangelicals of the rising generation to seek integrity, stability, truth, unity, and endurance. Most fittingly, a postscript highlights the pre-eminence of humility. John Stott may well be right that in the final analysis human pride is what really lies behind both liberal unbelief and evangelical self-destructiveness.