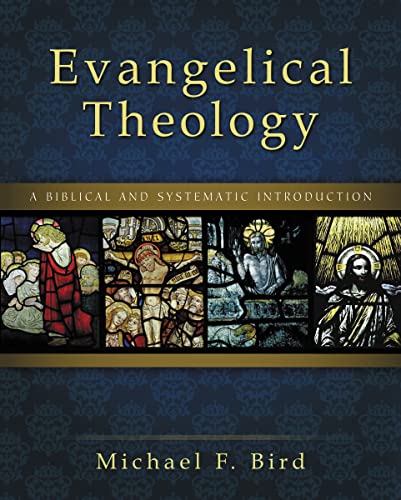 ‘This book was written for one reason. . . . I do not believe that there is yet a genuinely evangelical theology textbook . . . that has its content, structure, and substance singularly determined by the evangel’ (p. 11). Here we have one, attractively produced and inexpensively priced, in eight parts and with over eight hundred pages of main text. Following ‘Prolegomena’ (the first part), Michael Bird’s Evangelical Theology describes the ‘God of the Gospel: the Triune God in Being and Action’. The three subsequent parts take as their subjects the gospel of the kingdom, the Son, and salvation. Then the Holy Spirit is treated, who is ‘the promise and power of the Gospel’ before a penultimate part on ‘The Gospel and Humanity’ precedes the climactic section on ecclesiology, bearing the name of ‘The Community of the Gospelized’. An ‘Epilogue’ describes ‘Urgent Tasks for Evangelical Theology in the 21st Century’.

If there was ever a brief and bland description of a book which, in its brevity and blandness, contrasted with the book described, you have just read it. What is different about the content of this book? Probably and presumably the persistent concern with the life of the church actually expressed, not just stated as a matter of principle, throughout the volume, a volume which keeps in mind the aspiration that ‘a theology textbook should be more like a manual for warfare [than ‘an exercise in intellectual curiosity’], guiding the soldiers of Christ in how to take every thought captive to Christ’ (p. 809). It is thus fitting that it should close passionately with ecclesiology, and that raises the question, “What is different about its structure?” The order of loci treated is determined by the gospel itself: hence, e.g., eschatology and millennium have been discussed before the church, because the gospel would have us think kingdom before we think church. Finally, what is different about its substance? It would be worrying if we could find much that was different, since the author aspires to describe the principal tenets of evangelical theology and foster evangelical unity as far as possible. So it is no criticism—it is a commendation—to say that the substance is largely familiar, although Michael Bird consistently offers fresh opinion on or fresh formulation of this or that doctrinal point. He makes clear early that he identifies himself with the Reformed tradition and ‘thereby gravitate[s] toward the Calvinistic scheme of theology’ (p. 23).

Much in this volume is well and truly said; the style is lively and not laboured, accommodated to its readership, which is meant to include laypersons. (Summaries of what has been said and questions for study indicate that particular concern.) We should welcome both the author’s gospel-centred thinking and, as an implication of this, the concern for gospel-centred life and evangelical unity, fittingly expressed in the discussions of baptism and the Eucharist which fittingly conclude the bulk of the volume. Where biblical material is faithfully presented and biblically based thought faithfully followed, we must be grateful. Yet there are significant drawbacks.

First, the structure is puzzling. Its principle is not stated clearly, since Bird first says that ‘all Christian theology, all God-talk, and everything we infer of things divine, is really an attempt to work backward from the revealing and redeeming action of God as declared in the gospel’ but then likens the gospel to an act within a play which ‘presupposes previous divine acts’ (pp. 89–90). These statements may seem to require only modest reformulation to make them transparently consistent (they are not contradictory), but the fact that humanity and the human plight are not discussed until late in the volume and long after we have learned of atonement and salvation makes us wonder if we have quite got their measure. The huge topics of creation and fall are discussed on pages 497–500, but we read on at least another 150 pages before discussion of a literal Adam and the image of God. Further—although this shades into the question of balance as well as of structure—one wonders why the resurrection of Jesus gets so comparatively little space right in the centre of a book geared to the gospel.

Second, there are a great number of inaccuracies. A form of foundationalism is confused with (loosely) critical realism (p. 40); the Barth-Brunner disagreement is completely misrepresented (p. 71); it is wrongly stated that divine timelessness ‘means that he [God] knows neither past nor future’ (p. 128); the orthodox word used for the nature of Christ was φύσις, not οὐσία (p. 484); Barth is quoted as a supersessionist who said that ‘the Church is the historical successor to Israel’ (p. 720; words wrongly cited as coming from Church Dogmatics II/3), whereas Barth was here describing the position which he was strongly opposing. These are just some examples. Discussing divine impassibility, Bird avers that this does not mean that God does not suffer, but that he does not suffer under external duress: he chooses to suffer. He is favourable to Mark Baddeley’s argument ‘that impassibility is what makes the gospel good news’ (p. 131). However, among those who are cited as denying impassibility are not only Moltmann, Barth, and Bonhoeffer, but also Don Carson and John Stott. From this, the reader ought logically to conclude that all five effectively deny the gospel. Michael Bird does not believe that, but let the reader follow his statements (pp. 130–31).

Third, we should not expect a textbook to be comprehensive, but I am bound to say that it is all too often superficial. We may question the federal scheme in theology and imputed righteousness (Bird gets the Latin wrong on p. 222), but we should not do so in terms of Jesus becoming ‘our vicarious Pelagian, who keeps the law for us and imputes his obedience to us’ (p. 224), ‘the exemplary Pelagian’ providing ‘righteousness molecules floating through the air to us’ (p. 563). We may reject kenotic Christology, but we should not think that this can be done in one sentence (p. 467). We may be impressed by Alvin Plantinga, but we should not confidently conclude that he solved the logical problem of evil between thirty and forty years ago (p. 689). We may deny transubstantiation, but we should not formulate our denial in the language of transubstantiation sounding ‘weird’ (Bird’s inverted commas), spurning the invocation of Aristotle ‘and some kookie distinction between substance and accidents’ (p. 787).

Michael Bird rightly urges systematic theologians to be familiar with biblical studies. Perhaps there is no law that biblical scholars should be familiar with systematic theology. However, if they consciously undertake ‘a biblical and systematic introduction’ to evangelical theology (and that is a most welcome undertaking), they must give themselves time to familiarize themselves with the latter discipline. There is much good material in this volume which will benefit the church. My rather cheeky but entirely serious conclusion is that a revised edition some way down the road would be most welcome and most profitable.