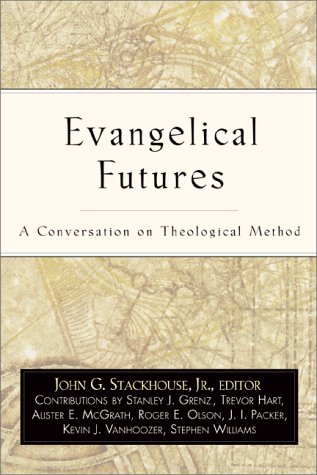 Say one thing that you want to say to evangelical theologians about theological method. You’ve got one public address, and one article, to get your personal message across to your colleagues (9).

This is the gauntlet thrown down by John Stackhouse to the other seven contributors in a volume that attempts to address and highlight some of the challenges for evangelical theology in the contemporary postmodern context. The contributors are Alister McGrath, Stanley Grenz, Kevin Vanhoozer, Stephen Williams, James Packer, Roger Olsen and Trevor Hart, representing different points on the evangelical spectrum. The line-up of theologians promises an exciting prospect, however, only a couple of the essays offer a fresh challenge to the current debate on theological method.

The volume is split into four parts. In part one Alister McGrath and John Stackhouse set the stage. McGrath highlights the ‘state of the art’ assessing where the conversation on evangelical methodology stands at the present time, it is interesting to note that McGrath acknowledges the growing importance of evangelicalism in Asia, Africa and Latin America almost only as a footnote in his essay. This oversight is further reflected in the authorship of this work, who are all from the western world (Britain or North America), male and white. Stackhouse, in his essay, outlines what it is to be evangelical and argues that when doing theology, evangelicals should unashamedly stay faithful to the traditional motifs of evangelicalism.

Part two entitled ‘Programmatic Proposals’, is the most interesting and challenging part of this volume as the contributors attempt to address the postmodern situation. Firstly, Vanhoozer states that his aim is to ‘propose what an evangelical theology with a post-propositionalist Scripture principle … should look like’ (69). Using analogies from the ‘world of theatre’ Vanhoozer explores how a ‘canonical-linguistic approach’ to method, one that differs from George Lindbeck’s ‘cultural-linguistic approach’ can best serve this end (75). The canonical-linguistic approach looks to Scripture for the shaping and moulding of our norms allowing canonical wisdom to develop (101).

Second, Grenz offers a very different proposal that suggests a revision of evangelical theology in the face of the demise of foundationalism. He rightly recognises that a major impact of the postmodern condition is centred upon the realm of epistemology (109). Consequently Grenz suggests that an alternative epistemology be sought in view of the above. Drawing on insights from such thinkers as Pannenberg, Lindbeck and the Reformed epistemologists, Plantinga and Wolterstorff, Grenz argues for a complete restructuring of evangelical theological method. Grenz identifies what he calls the ‘Christian experience-facilitating interpretative framework’ as basic for theology (122). This is something that is common to the Christian community and provides the basis (though not in the foundationalist sense) for understanding the contemporary context (123). Grenz argues that ‘all theology is communitarian’ (131). Theology arises out of the believing community which reflects on the Christian faith. This leads to a coherentist understanding of theological method whereby different communities have differing understandings of what is important for their context. Grenz suggests that these different interpretations of the Christian faith, whilst remaining connected to the biblical narrative, form the ‘Christian Belief Mosaic’ (124).

The third part, ‘Engaging Tradition and Traditions’, covers two essays by McGrath and Stephen Williams. McGrath examines how evangelicals should value past traditions and learn how seminal theologians such as Augustine and Calvin adapted their theology and reading of Scripture, without being bound by such interpretations. Williams on the other hand calls for moral accountability in theology, drawing heavily on Bonhoeffer.

The concluding part has responses from Hart, Packer and Olsen. Packer contributes little to the debate and one cannot help wondering if he was included as an elder evangelical statesman. Trevor Hart encourages the use of imagination more in relation to doing theology and acknowledges the efforts of Vanhoozer and Grenz in their imaginative approaches to the debate.

The major weakness of this volume is that, with the exception of the contributions from Vanhoozer and Grenz, it offers little in the way of substantially furthering the debate. However, overall this volume serves as a good introduction to some of the issues and proposals in this complex debate and will be a catalyst in provoking more discussion in the area.