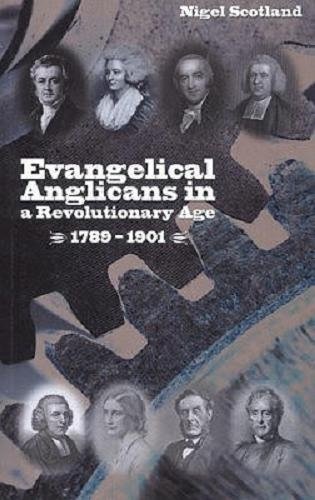 EVANGELICAL ANGLICANS IN A REVOLUTIONARY AGE 1789–1901

The nineteenth century transformation of English society coincided with the emergence of evangelicalism as a self-conscious movement within its established church. Just as the Industrial Revolution impelled rapid social change, so the Great Awakening pioneered by Wesley and Whitefield gave birth to more than a century of evangelical activism. It was not just the abolition of the slave trade which owed its impetus to their energy and vision; many improvements in public health, education and employment conditions stemmed from their compassion and campaigning.

This is the central argument of Scotland’s substantial survey of the Anglican evangelical world in the nineteenth century. But the book ranges widely. As well as tracing their engagement with the rapidly evolving urban society of Victorian England, it outlines the emergence of evangelicals on the bishops’ bench; theological and missionary emphases; internal differences within the movement; the influence of American revivalism on its spirituality; and the controversies triggered by the Oxford Movement and its aftermath. Initiatives to redress the inadequacies of the parish system and attitudes to Sunday observance campaigns and the temperance movement are also discussed.

The book opens a useful window on what is currently a neglected field. Evangelical capacity for forfeiting public Sympathy through unattractive theological wrangling is not neglected, but Scotland provides timely documentation of an era when evangelical convictions bore fruit in practical effort to improve society. Twenty-first century post-Christian Britons are more indebted to biblically-faithful social activists than they know. As a reference book to a poorly-served dimension of both English and evangelical history it is likely to be useful for years to come.

Your reviewer, however, is also looking forward to a second edition! The book suffers from what appears to be over-hasty completion, with a good deal of rather confusing repetition, an uneven feel, and some looseness in terminology. On page 261, for example, ‘the Great Awakening’ of 1740s New England is mentioned, but only four pages later we are told that ‘the Great Awakening’ (now referring to an altogether different movement) had begun in New York in 1857! Such lapses are unfortunately not uncommon and leave one feeling rather uneasy over the work’s reliability for detailed study.

In conclusion, two further omissions should perhaps be mentioned. First, the author’s choice of a thematic rather than chronological approach is unavoidable. But unless the reader already has a firm grasp of the history of nineteenth century England, the significance of a great deal of the activity Scotland describes is likely to elude her. Some chronological handholds for the non-specialist are sorely needed.

Second, and not unrelated, the ‘revolutionary age’ itself needs some description. Here again, knowledge of the extraordinary vibrancy and turmoil of Victorian England is assumed rather than communicated. The result is that we miss an accurate sense of the scale of the achievement of our evangelical forbears. We suspect that Scotland is right when he tells us that it was immense. To see it set more clearly in its contemporary context would be even more instructive—and inspiring.