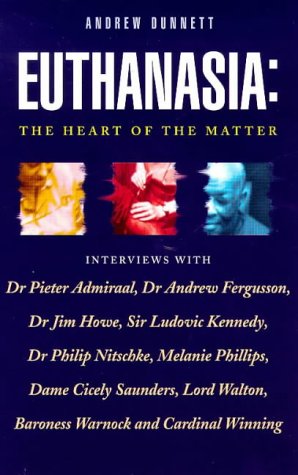 This book is a collection of interviews with ten key people, both Christians and non-Christians, medics and non-medics, who have contributed to the euthanasia debate. Andrew Dunnett uses a journalistic, rather than academic, style to address the debate surrounding euthanasia.

Through these interviews, different legal and ethical positions on euthanasia in the United Kingdom, Holland and Australia are explored. Dunnett also draws out the personal views of people including Dr Pieter Admiraal, Ludovic Kennedy, Dame Cicely Saunders and Andrew Fergusson.

The significance of terminology, i.e. voluntary, non-voluntary and involuntary euthanasia, is evident throughout the interviews. The interviewees not only appeal to different definitions of such terms, but also place on them varying degrees of significance. Other common issues include, the moral significance of withholding or withdrawing treatment, whether there is moral difference between actions and omissions, the principle of double effect the role of individual autonomy in the debate and advanced directives.

The collection is easily accessible to a wide range of readers, whether in health case, politics, public policy or anyone concerned about the issues. The organisation of the book makes it easy to pick up and put down. The views of each person are presented in a way that enables the reader to gain insight into the reasons for holding that view, as well as the key issues. Often the juxtaposition of these views from chapter to chapter is quite striking.

The structure of each chapter is clear, with a brief biographical summary of the interviewee, a précis of the person’s views and the interview itself. Dunnett makes no comment on the interviews, but simply relays them. This is useful up to a point, but there are no transitions from chapter to chapter and the book does not flow as well as it could. It is also not clear how much of the original interview was used and how each was edited.

Furthermore, at the end of the book there are no concluding comments. After exploring such a range of views on a hotly debated topic, the book needs some comment or observations from the author. It would have been helpful to have some of the common themes and issues highlighted and drawn together. Without wishing to weight the volume too heavily on one side of the debate or another, some analysis of the material would have been welcome.

The positive side of the lack of editorial analysis or comment is that readers are left to draw their own conclusions. Ultimately, the collection is interesting and is likely to draw readers from a wide spectrum.