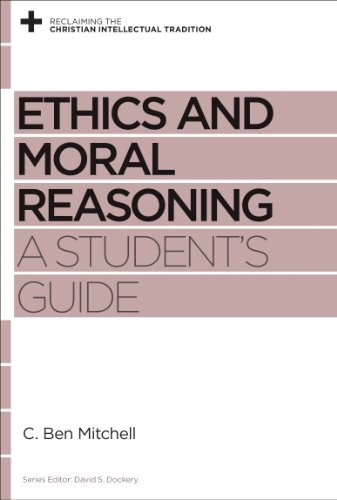 Ben Mitchell, Professor of Moral Philosophy at Union University, contributed this volume to a wonderful little series of books edited by David Dockery on reclaiming the Christian intellectual tradition. The endorsements alone can serve as a valuable testimony to the book’s usefulness for students (who are the main audience) and also for curious minds desiring to be informed as well.

Mitchell introduces his presuppositions and end goal in the preface of the book, concerning himself with ethics from a Christian prospective for the end of establishing right relationship with others and right worship before God (p. 18–19).

The book is divided into six chapters, plus a conclusion. In the first chapter Mitchell addresses the challenges from a relativistic moral ethic. The premise of relativism is further introduced via the diversity thesis and dependency thesis—the former stating that morality differs from person to person and culture to culture, and the latter that moral truth depends on the contingencies of the human condition and sociocultural circumstances (p. 25). He finished the chapter giving the classic responses to relativism and identifying the values and ethical standards accepted across cultures no matter the norms also present in that culture.

Chapters 2–3 are an overview of the history of moral reasoning from a biblical understanding. Mitchell begins with the Old Testament, observing the normative ethical standards given from the beginning regarding marriage, work, sanctity of life, gender and racial equality. The chapter finishes with a longer treatment of the Ten Commandments and the normative application of them to Western jurisprudence (p. 39), the relationship between God and man, and human relationships. The third chapter considers the New Testament, particularly the teaching of Jesus in the Sermon on the Mount, and Mitchell observed rightly that Jesus is introducing a transition from the old to the new covenant (p. 54). The Sermon on the Mount deepens the moral truth of the old covenant which Jesus came to fulfill. The final section of chapter 3 introduces the idea of natural law and some of histories great thinkers and modern ones that advanced ideas regarding the search for meaning and happiness.

Chapter 4 presents Enlightenment ethics. First, the Enlightenment cannot be comprehended apart from Kantian ideas. Mitchell addresses Kant and the Enlightenment presupposition of human reason as the fundamental arbiter of morality and truth. Mitchell explored Kantian morals through the Categorical Imperative (p. 66) and offered the critique that Kant’s idea is more in line with etiquette that moral duty. Furthermore, the Enlightenment was represented by utilitarianism, particularly in reference to pleasure and pain. According to the book, the problem with utilitarianism occurs in its individualism, making pleasure and pain equivalent from person to person without regard to measure. Mitchell exposes rightly individualism’s inability to interpret and calculate well the rightness of a pleasurable act, and the way utilitarianism could permit what is wrong if one could prove it is beneficial for enough people (p. 72). In summary, Mitchell highlights the failure of the Enlightenment to achieve morality through reason, borrowing from Polman’s position against Action-Based Ethics (deontology and utilitarianism) that those positions lack a motivational element. Mitchell shows further the Enlightenment’s rejection of the spiritual dimensions of ethics and the communal ethics for a false personal autonomy.

Chapter 5 explores the dimensions of evangelical ethics through several ethicists from the last 100 years. Mitchell uses John Murray as an example of Divine Command ethics in the Reformed tradition, in which Murray stresses the inability of humanity to follow God’s law and the need for union with Christ through salvation to make one able to embrace God’s commands. Moreover, Carl F. H. Henry grounded the Divine Command ethics of evangelicalism in his understanding of God’s revelation of himself in the Bible in contrast to the relativistic situational ethic advanced in 1960s. Mitchell concludes by addressing the influence of Arthur Holmes, Stanley Hauerwas, Walter O’Donovan, and Gilbert Meilaender on evangelical ethics.

The final chapter seeks to connect Christian ethical theory with application for students. It addresses topics such as “The Bible as Law Code” and “The Bible as Universal Principles.” This chapter is the most practical in nature, and can be far-reaching in its implications for students serious about moral reasoning. Mitchell concludes chapter 6 with the following guide for finding ethical guidance from the Bible (pp. 95–96):

In the final analysis, the book keeps to its purpose to bring students up to speed on ethical theory and moral reasoning. Mitchell’s evangelical commitments and desire for human flourishing can be felt throughout the book. This book serves as a good introduction not only to wider ethical and philosophical theory but for the Christian student’s interaction with them, and how they might formulate their own ethical position, with guidance from a seasoned scholar in the field.