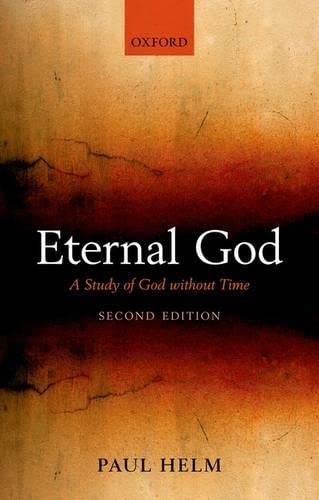 Eternal God: A Study of God without Time

Helm is known for his clarity and argumentation, and the Eternal God lives up to that reputation. His thesis is to defend the traditional doctrine of divine timelessness. Divine temporalists and atemporalist agree that God’s eternality consists in existing without beginning and without end. The atemporalist further holds that God exists without succession. A timeless God has no before and after in his life and lacks all temporal properties including simultaneity and duration. A timeless God is immutable in the strongest possible sense: He cannot suffer any intrinsic or extrinsic change. Helm never claims that this is the biblical understanding of eternity. The Bible never gives us a clear theory on the metaphysics of time or eternity. Helm notes that any doctrine of time and eternity will be underdetermined by the biblical evidence. How can Helm argue that God is timeless if the Bible does not explicitly endorse this view? Helm’s strategy is that timelessness coheres with scripture and Christian doctrine in ways that divine temporality cannot.

One of the significant weaknesses of the first edition was a complete lack of discussion on the philosophy of time. It makes little sense to weigh in on God’s relationship to time and not answer crucial questions about time. What is time? What moments of time exist? Unfortunately, the second edition does not contain any significant discussion on time either. Based on his doctrine of divine immutability and creation, I assume that Helm holds to a relational theory of time where time is change. In regards to what moments of time exist, Helm endorses the B-theory of time. On the A-theory of time, the present is the only moment of time that exists. The past no longer exists, and the future does not yet exist. On the B-theory, the past, present, and future all exist.

Helm employs the B-theory to solve some problems related to creation. Chapter 12 deals with William Lane Craig’s objection to divine timelessness based on creation ex nihilo. Craig holds the A-theory, which is the traditional view of time. Craig’s objection goes as follows. The doctrine of creation ex nihilo holds that there is a state of affairs where God exists without creation. Then there is a state of affairs where God exists with creation. Once God creates He causally sustains each present moment of creation. As such, God undergoes a change and is temporal. Helm adopts the B-theory of time to avoid this problem since, on the B-theory, creation is coeternal with God. There is no state of affairs where God exists without creation. Oddly, Helm neglects the way change is understood on the B-theory of time. The B-theory is still a theory of time and change, and Helm offers little by way of exposition as to how God relates to this type of temporal world.

Chapter 13 deals with some objections from Richard Swinburne. Swinburne’s arguments against timelessness are technical, but Helm explains them well. The basic thrust is that atemporal causation is impossible. How can a timeless God cause temporal effects without himself being temporal? This is a serious question that Christians have examined for centuries and have failed to offer any satisfying explanation. Unfortunately, Helm continues this tradition of unsatisfying answers. He asserts that a timeless cause can have temporal affects. How is this possible? We can define “cause” in a non-temporal way. What does this look like? Helm claims we can be agnostic on this point and use “cause” equivocally.

In an attempt to justify Helm’s two standpoints, he anachronistically interprets Augustine. Augustine held that the present is the only moment of time that exists. He also holds, like most in the ancient and medieval world, that God’s knowledge is in no way based upon creation because God’s knowledge is identical to himself. God has a perfect knowledge of himself and thus knows all things. On Helm’s reading Augustine believes the exact opposite of this. Augustine turns out to be a closet B-theorist who holds that God knows all things because all things eternally exist.

Chapter 15 may be the thing that justifies a second edition of the book. Helm offers some serious objections to divine temporality based on the doctrine of the Trinity. Temporalism may entail Arianism. If atemporal causation is impossible, then the Father cannot atemporally generate the Son. As such, there would be a time when the Son was not. Interestingly, Helm notes that if the begottenness of the Son is understood as causation conceptual difficulties abound for everyone. It is difficult to see how the Son could have the same aseity as the Father. After noting the conceptual difficulties for eternal generation, Helm asks if the doctrine is something read back into the NT. He concludes by asking why we cannot hold simply that the divine persons are all equal and coeternal and be done with eternal generation.